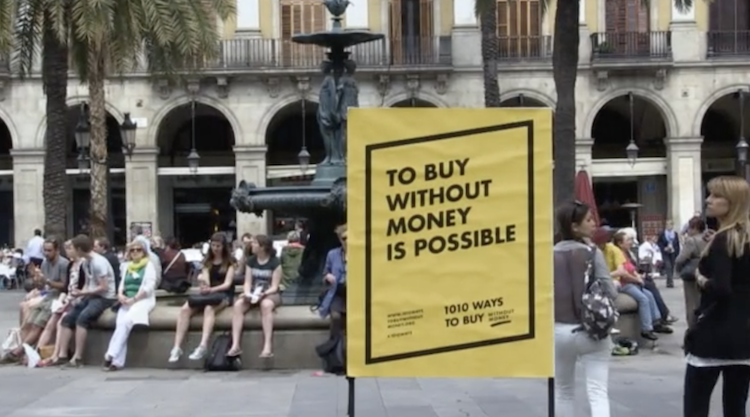 Urban sharing is growing in cities across the world — but how can we access or understand their impact, especially when factoring in wider social goals around equity and the environment? What is the proper role that cities can play in facilitating the growth of sharing platforms or spaces? To better understand these issues and more, we spoke with Karin Bradley, an associate professor for Urban and Regional Studies at the KTH Royal Institute of Technology in Stockholm, Sweden, who has focused her research on the sharing economy, urban commons, planning, and policy around sustainable urban development.

Nithin Coca, Shareable: Can you tell me how you got interested in urban sharing and the sharing economy?

Karin Bradley, associate professor at the KTH Royal Institute of Technology: I'm a researcher in in urban planning, and I've been working on planning and policy for sustainable development. My PhD thesis was about how to plan and make it easier for people to live more eco-friendly lives. In planning, the standard recipe would be to try to build environments that support public health work, reduce motorized traffic, "densify" cities, plan for access to shared green space. But very little about consumption of material goods — we don't touch that.

I was interested in how you can approach the question of material consumption from a policy perspective. I've done research particularly from Scandinavian and Northern Europe countries. So overall, here we're quite good at urban planning in terms of public transport and environmental legislation, and in general there is quite high environmental awareness, but our levels of consumption are really high. We consume a lot of stuff and we go on lots of air travel. So in that sense when looking at the ecological footprints of Swedes for instance, we're among the top ten worst in the world, not that far away from the U.S. actually. I think it's important to also address the questions of our consumption. I saw collaborative consumption,sharing, and the emerging sharing economy as kind of a venue to get into that. How can you make living on less be also socially attractive?

I noticed that societal issues such as sustainability, climate, and resource use are key to your analyzing urban sharing. Why does this matter when analyzing sharing schemes?

We’re in an urgent need to find and to conceptualize ways of living on less environmental resources, but that are attractive and fun, and seen as something innovative, in a sense. Because I think, often in the traditional environmental debate, it's "not do that, not drive too much, not eat too much meat, not fly so much" — there are elements from the sharing economy practices that take aspects from historic practices, but put them in a new context and with new technologies. That can be attractive to many people. Other ways of living with less but with greater social context and more meaningful social community — possibly, not what the sharing economy does at the moment, but it could. As a researcher, I think it is important to describe emerging practices that would be low-impact lifestyles, basically.

What are some highlights, memorable findings, or anecdotes from your research or from the case studies you conducted?

I've been doing interviews with both users or citizens that are engaged in different forms of sharing schemes, particularly in Malmö, I've been doing studies and interviews on how public officials in the city, how they think,how they act,what kind of measures they use to promote sharing.

In Sweden, we haven't really been so hit by the post 2008 economic crisis. People are quite well-off. So the entry points for many people into collaborative consumption have been more environmental concerns and wanting to live in a less consumerist way. It's social and environmental reasons for many people. Whereas when I did my case study in Barcelona, it was clear that many people were really kind of hit by the economic crisis and really needed to find other ways of getting by. So saving money was more of an issue there. But from the stories I've heard, many people that even though they entered sharing practices from different points, they stay or they continue because of the social component.

How are cities providing infrastructure for sharing?

In Malmö as well as in Gothenburg, the local governments are proactive when it comes to facilitating for a collaborative consumption in the more non-commercial aspects of the sharing economy. It's not about facilitating for Airbnb but rather they are providing and funding spaces like repairs spaces or bicycle kitchens, swap shops and infrastructure where citizens can share resources, skills, and collaborate. There are several such examples in Malmö where the municipality either owns the space, has initiated it or given funding to organizations that runs the space.

What was different about Malmö's leadership that allowed for this?

They said they felt that they had a political backing from politicians to do this kind of thing, to experiment, and push the social and environmental questions. The economic situation is really quite tough. They came from a quite well functioning harbor city in the '50s, '60s, and '70s, strong working class structure. When the harbor and lots of other industries moved away, it was really hit by economic problems, and there's also lots of immigration to Malmö compared to other Swedish cities. So they became quite poor and they are really aware of the big social tensions and social injustices within the city.

Since they had very little funding, they need to be very wise with how they use it. So they would try to pool social justice funds with environmental funds, and then sharing is a really good way to combine social and environmental questions. This is one explanation they had.

They’ve also had a fairly stable Social Democrat and Green Party coalition for many, many years — so the public servants don't need to so much afraid about doing something that would wrong the next political term, whereas in Stockholm, it has been shifting every mandate period, there’s a new political majority.

What will be your focus around urban sharing going forward, and how do you plan to share your findings?

I have a larger plan to explore how urban environments can facilitate more sustainable and less individual consumption. Consumption, and the state of consumption, is something that politicians don’t want to touch so much, but I think we need to do that.

Traditionally as a researcher, you write scientific articles, and I need to do that as well. This documentary film "Dela är det nya äga" [in Swedish] that we did some years ago, it had a really huge impact in Sweden, and has been shown for lots of different groups. We're also engaging with societal partners, like with municipalities, which means we can try out things in practice, and test, think, and do research, not only observing what they do.

Header image is a screenshot from the "Dela är det nya äga" documentary. Image of Karin Bradley by José Figueroa