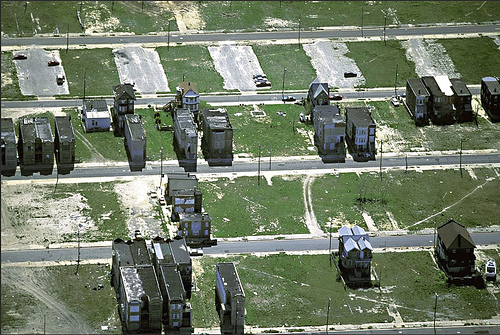 Last week the Urban Land Institute released its 30-year-old annual report on emerging trends in the real estate industry — and revealed that the industry is shifting away from sprawl and overbuilding to investing in shareable, sustainable neighborhoods:

Road congestion, higher energy costs, and climate change concerns combine to alter people’s thinking about where they decide to live and work. The lifestyle cost-of-living equation starts to swing away more dramatically from bigger houses on bigger lots at the suburban edge to greater convenience and efficiencies gained from infill housing closer to work. These homes may be more expensive on a price-per-pound basis, but reduced driving costs and lower heating/cooling bills provide offsets . . . "near-in suburbs will do well especially if they link to business cores by mass transportation."

Industry readers are advised to avoid investing in areas "with long car commutes or where getting a quart of milk means taking a 15- minute drive." Instead, the report recommends investing in urban areas and green buildings, citing buyer and tenant demand as well as operating efficiencies.

It’s important to emphasize that this report — which is based on a survey of 900 investors, developers, lenders, brokers, and planners — reflects mainstream opinion in the real estate industry, and that it represents a startling shift in direction. For decades, the industry as a whole fought against green building, and in favor of the loose regulatory structures that led to overbuilding and the foreclosure crisis.

When I talked with these folks at last week’s massive Urban Land Institute gathering in San Francisco, many of them stressed that this shift hasn’t been triggered by sudden concern about climate change or people who lost their homes to foreclosure.

Instead, the industry is reacting to the catastrophic collapse of the housing market, a changing regulatory environment and increasing focus on urban development by the federal government, more consumer demand for walkable built environments, and technological evolution.

Is this a permanent shift in a hopeful direction or just a tactical course correction in the face of a crisis? Kaid Benfield, director of NRDC’s Smart Growth program, argues that the shift was starting to happen even before the collapse of the market. He cites the findings of a survey of registered voters conducted by the National Association of Realtors in 2007:

Benfield cites another study by Arthur C. Nelson at the University of Utah:

Fully three-fourths of Americans now prefer either attached housing (apartments, condos, townhouses) or homes on small lots of approximately one sixth of an acre or smaller. Twenty-five percent express a preference for homes on larger lots above one sixth of an acre in size. Perhaps putting their money where their stated preferences are, Americans have lowered the average amount of land claimed per person for new development by half since as recently as 2001. Transit use is way up as well, and overall rates have driving are now in decline for the first time in decades.

In other words, people are driving many of these changes, not an industry in immediate crisis. I think the challenge, for those of us who see sharing as a solution to our various environmental and social crises, is to do what we can to leverage these gains and amplify the voices of those in the industry who are embracing the shift.