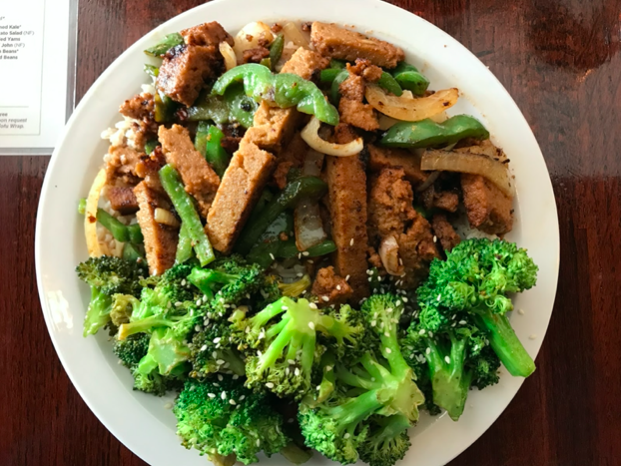 When Devita Davison looks at a plate of food, she sees more than just some nutrients and a hopefully tasty meal.

She sees a whole story.

Sometimes it’s a story of farmers toiling from before dawn to after dusk; of families spending hours preparing recipes handed down over generations; of chefs crafting meals like sculptors or painters; and of communities gathered in diners to plan their collective liberation.

But too often for Davison’s liking, they’re cautionary tales.

These are stories of farm workers and restaurant workers exploited and underpaid, families facing structural racism that denies them access to the fresh ingredients for heirloom recipes, and white-male investors and white-male chefs who capitalize on the culinary traditions of formerly enslaved or colonized peoples.

And don’t even get her started on how food can tell the story of what climate change is doing to foodways around the world.

“Food crosses so many intersections in a way that few other things can,” says Davison. “This one medium allows us to connect so many disparate stories. It allows us to have a starting point that everyone can relate to and get to deeper issues that people may not have ever thought about.”

With the COVID-19 pandemic shuttering many food businesses temporarily or permanently, FoodLab Detroit has refocused on supporting surviving businesses that want to break the cycles of racist, exploitative, profit-first practices — such as tipping — that have long been taken for granted.

Having previously lost her home and her business to Superstorm Sandy, Davison knows better than most how a disaster can be the exact moment that food becomes someone’s method of choice to bring about a more just and equitable world.

“I wouldn’t be what and where I am right now if not for the tragedy of Sandy,” says Davison. “Even though we will always continue to be an organization that is exclusively committed to using food as a tool of choice for transformation in the world, we as an organization had to transform and change to be more specific about the work we’re doing with the resources we have.”

Amid the recent wave of #BlackLivesMatter protests, the food world is coming to a long-overdue reckoning with its race problem.

The top editors of Refinery29 and Bon Appetit, two prominent food industry publications, both resigned this year for racism-related causes. The conversations around those resignations felt even heavier in light of COVID-19’s impact on small businesses, which has come down particularly hard on Black businesses.

The food industry doesn’t have a problem of overall representation — some 46 percent of restaurant workers identify as Black, Asian or Latino, according to the U.S. Census Bureau.

Rather, it’s a problem of power and prominence.

That kind of visibility drives mostly white-men investors chasing the chefs whom they believe are likely to attract the most customers.

Now, FoodLab Detroit members are starting to gain some of that precious visibility, with founding member Sister Pie — with a white woman founder — named a finalist last year and again this year for the restaurant industry’s prized James Beard Awards.

With that visibility comes new choices as businesses grow and begin approaching investors and competing with more and larger rivals: is it worth growing a business only to adopt exploitative, profit-first practices that are the industry norms?

Or can these new businesses  chart a different path that establishes new norms (and also maybe find different investors)?

Davison still believes food can help bring about a more just world, but food would need to start by changing itself — or, more accurately, going back to its roots.

Like so many people and institutions in the United States, the Great Migration profoundly shaped Devita Davison long before she realized how.

In the United States, from 1910-1970, an estimated six million formerly enslaved people and their descendants fled Jim Crow segregation and structural racism in the South to cities in the North and West.

Davison’s parents migrated from rural Alabama to Detroit. As did many parents of the Great Migration, they took their children “back home” to visit grandparents and other family members every summer.

Davison remembers long drives with “shoebox lunches” along the way. On their farms, her grandparents raised pigs and chickens and slaughtered them right in front of her. She heard stories about her great grandparents growing produce they sold in their own store.

In Detroit, her parents, like many of their peers, carried on the agricultural practices they could, cultivating food in their backyard, and even bought a vacant side lot to grow more.

The results were bountiful. Davison remembers going to school every morning with a little red lunch pail full of leftovers from last night’s homegrown and home- cooked dinner.

These memories became seeds in Davison that, much later, would sprout into a vision for using food as a tool for social justice.

From dreams to reality

In many ways, Davison was living out the dream that many of the Great Migration had for their children. She moved to New York City to attend graduate school for marketing, and went on to work for Ralph Lauren and later Hearst Magazines. She took a buyout from Hearst and started a small, local grocery store, The Southern Pantry Company, in Brooklyn’s Bedford-Stuyvesant neighborhood. She eventually bought a house out on Long Island, and a year later Superstorm Sandy hit.

As she watched the waters rise around her house, she promised her parents if she survived, she would come home to Detroit.

“That’s where I found myself after Sandy, sitting on my parent’s couch, asking myself, ‘why me, why did I have to lose everything,’” says Davison. “After two or three days my mother said to me, ‘The Lord didn’t send the waters to drown you, he sent the waters to move you.’”

That’s when she made a cold call to Green Garage, a locally-owned co-working space in Detroit. But no one picked up.

“So I left a message,” says Davison. “Told them a little about who I was, what I did back in New York before the storm. I don’t know what it was, I started breaking down crying, leaving a message on the answering machine.”

In a moment when she felt the most vulnerable, Davison put that vulnerability out there to a stranger, Green Garage co-founder Peggy Brennan, who called her back within the hour, and introduced her to another stranger, Jess Daniel.

In 2011, Daniel had started a meetup with a handful of other would-be food entrepreneurs who all wanted to build businesses that would have an explicit social purpose from the start. It was called FoodLab.

“It was just a meetup group with some of the dopest individuals who were a part of movements around Detroit,” says Davison. “We were hearing about all these investments in downtown Detroit and we were like, ‘Where are Black folks, native Detroiters?’”

Not long after meeting the early FoodLab members, Davison was tapping into networks of commercially licensed church kitchens for FoodLab members to use during off hours.

FoodLab Detroit was also inspired by other kitchen incubators serving marginalized communities around the country, such as San Francisco’s La Cocina.

There are still plenty of barriers facing locally owned food businesses in Detroit — most importantly, gaining access to trusted sources of credit.

While some FoodLab Detroit members are clearly moving past the incubation phase, they also want to re-examine their own business models so as to avoid perpetuating the food industry’s systemic inequalities.

They’re turning out to be role models for other food entrepreneurs, as well.

“They’re at a point where they feel it’s not working,” says Davison. “This industry is exploitative, and these entrepreneurs want to pay better wages, locally source ingredients, they want to transform the industry and use food to dismantle structures of injustice.”

So last year, FoodLab Detroit brought seven local food businesses together in the inaugural FoodLab Detroit Fellowship, and engaged them in what might be called group therapy.

The goal —help chefs, bakers, and restaurateurs form deep relationships around solving shared challenges, such as how to shift to a no-tipping business model.

Tipping is taken for granted in the United States, so much so that the federal minimum wage for tipped workers is just $2.13, not the $7.25 an hour federal minimum for other workers.

While many states have higher minimum wages, only seven states require employers to pay the full state minimum wage before tips.

According to the organization Restaurant Opportunities Centers United, about six million workers across the country are tipped. Of them, about 80 percent are in the restaurant industry, two thirds are women, 19 percent identify as Latino, 10 percent as African American and 10 percent as Asian.

It’s no coincidence that people of color are overrepresented in professions where tipped workers are the norm, as the practice has roots in slavery.

“It has been amazing listening to these business owners talk with each other about all the little things that come up in shifting away from tipping,” says Davison.

FoodLab Detroit is doing another cohort of its fellowship this year. It’s also supporting a cohort as part of the Tapestry Project Action Lab, an initiative that supports “micro-businesses” with five or fewer employees, including the owner.

The Tapestry Project cohort will work together to confront disparities in wealth, access to credit, and lack of trust in financial institutions among Black micro-business owners.

The midst of a pandemic might seem to some like a wild time to be re-thinking the food industry, but Davison feels there is no more urgent moment than now.

“There are people much more powerful than you and I who want things to go back right the way they were,” says Davison. “These exploitative, racist systems were not broken before. They were and are working just as designed for people who are in control, who are in power.”

Oscar Perry Abello is a New York City-based journalist covering alternative economic models and policies in cities for several publications, chiefly Next City — an independent, not-for-profit, online magazine where he is currently senior economics correspondent. He also contributes to Yes! Magazine, City & State New York, Impact Alpha, Shelterforce, and other outlets. Oscar is a child of immigrants descended from the former colonial subjects of the Spanish and U.S. imperial regimes in the Philippines. He was born in New York City, and raised in the inner-ring suburbs of Philadelphia. Oscar has a bachelor's degree from the predominantly-white Villanova University, where he majored in economics and minored in peace and justice studies. He spent several years embedded in the international development industry before transitioning to into journalism full-time in 2015.