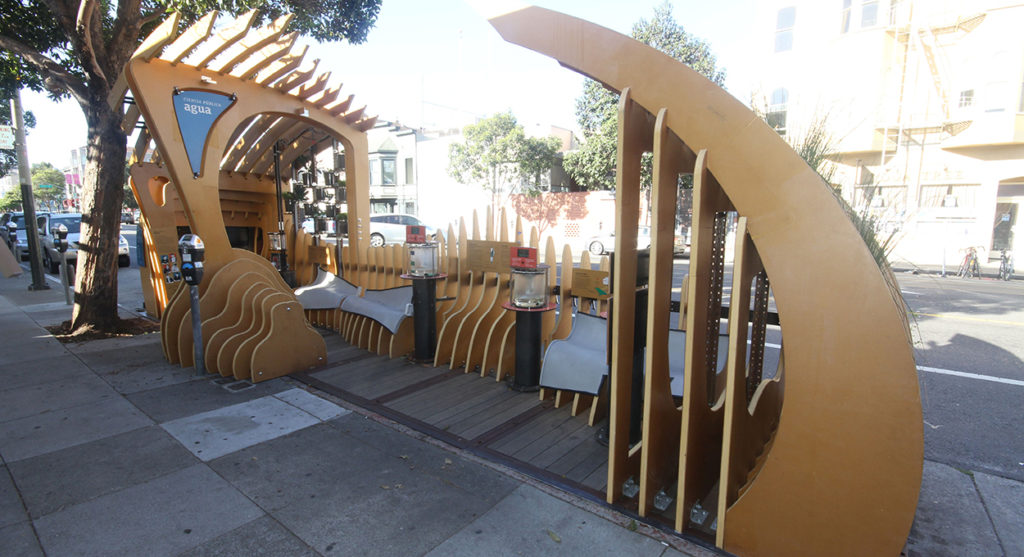 The Aqua Parklet at The Exploratorium; image provided by Barbara Brown Wilson

Every element of a city’s design, from street lighting to sidewalk drainage to the shape of the skyline, is influenced by politics. It’s not always clear what that politics is, or who the decision-makers behind it were, but it’s there. You just have to look closely. When you do look closer, you might realize that the decisions about how a city functions are made behind closed doors. You’ll see how racist and classist legacies shaped our neighborhoods and how they continue in new forms, even when urban planners and designers have good intentions.

In her latest book, “Resilience for All,“ author Barbara Brown Wilson uncovers the politics behind our urban landscapes and lays out an alternative to business-as-usual urban design and planning. The book anchors this alternative vision with a variety of case studies that exemplify how marginalized communities are pushing back against the classism and environmental racism that is embedded in the urban design process.

Shareable contributor, Robert Raymond, spoke with Brown Wilson about several of the case studies outlined in her book and why community-led urban design and planning has the potential to create lasting systemic change.

Robert Raymond: Could you broadly explain what makes the case studies that you present in “Resilience for All” important and how they demonstrate and alternative to more traditional models of urban planning and development?

Barbara Brown Wilson: In “Resilience for All,” I’m interested in what land use looks like when communities make their own decisions about what should go in their communities. I’m interested in practices where people are building power, building capacity and thinking with their own systems in mind. This is a real shift from the top-down way that urban planning and many other fields that govern land use typically function.

In the book, I look at small-scale cases because often that is the level in which this sort of extra-governmental work can really happen, where a community can really make shared decisions about shared space purely. In every case in the book, the communities that I was able to highlight are communities that were thinking with systems change in mind. They were commonly communities of color that had been traditionally disinvested and often were subject to environmental vulnerabilities… having some relationship to environmental or economic classism and racism. And in each of these cases, what they’re doing is they’re linking social and environmental systems because, of course, they really are completely linked. If you are feeling vulnerable to both, you’re innately aware of that.

Another commonality in the case studies is that they model how small systems change could actually make larger impacts. So, for instance, East Biloxi, Mississippi, was an area that was segregated during Jim Crow and is more vulnerable to storms than other parts of the Gulf Coast. What they did post-Katrina was to look at what ecological assets might have been underappreciated — and they found that a particular bayou called Bayou Auguste wasn’t being properly maintained by the city. They did what they called the “Bayou By You,” which was a fully participatory revisioning of Bayou Auguste. [They understood that] it was only one bayou, but it was a part of a much larger and important bayou system. [This] allowed for thinking about not only the ecological benefits that one gets from being able to absorb the shock of a storm in terms of ecological resilience, but also job training programs and the support of the fishing industry that comes from doing bayou restoration.

They also found ways to include this into the educational system in some really profound ways that strengthened the public school systems that were neighbors [to Bayou Auguste]. The initiative also allowed for citizen science that connected what high school students were learning with local environmental needs and monitoring more broadly. And in that case, they transformed this one bayou and modeled a really exemplary practice that was mutually beneficial for lots of different interest groups. The city of Biloxi has now taken this job training infused model and has restored twelve bayous in their system, which is really transformational in terms of both ecological but also economic benefits for the people involved.

Your book is filled with many case studies like this that embody the broader, more theoretical concepts that you outline. Can you talk more about the Ciencia Pública: Agua program in San Francisco’s Mission District?

San Francisco is the home of parklets, along with a notion that with “tactical urbanism” we can think differently about the use of the street. But parklets were not actually something that were beneficial in every community — they didn’t seem to be a part of the lexicon of the urban landscape and existed predominantly in more affluent communities, mostly engaging a certain type of white audience.

The Ciencia Pública project was a really neat partnership between young people and a local museum to try to transform the notion of what a parklet might be to something that’s much more instructive for learning about ecological issues. So in this case, they used water to think about the ways in which young people might engage in making projects and in design — and where they might begin to understand what professions are available to them. The project uses a really cool sculptural form and also involves citizen science in the collection of data about water locally.

Can you talk a bit about the green infrastructure and anti-poverty case study taking place in the Cully neighborhood of Portland, Oregon?

The Cully neighborhood in Portland, Oregon, is the most ethnically diverse neighborhood in Oregon and is a really amazing place filled with strong and creative human beings, many of whom were not feeling heard and seen by the (city). At the time, Portland was creating the notion of supported neighborhood-wide areas called ecodistricts, and Cully began to refer to itself as the Rogue Ecodistrict. They used the same lens of partnership and district wide support that was part of the ecodistrict program, but really took a wealth-building and equity-focused lens to their work.

They are led by a group called Verde, which is all about green infrastructure production and green jobs training towards the hiring of people for high quality jobs. They identified that a lot of areas in the Cully neighborhood were lacking in park space in comparison to other parts of the community. They also knew that the Cully neighborhood was really threatened by gentrification pressures, and so they wanted to build wealth locally while also making sure there was ample community-driven green space. So they did amazing things.

For example, they took one park that was underutilized and underappreciated and they got the city to give them the development rights. They then led a community-driven design process for the vision of what Cully Park could be and then used that as a green jobs training center. They actually built some really beautiful amenities, like a thriving community garden, but also a inter-tribal area and a lot of really beautiful shared spaces that I think are not within the bandwidth of your typical Parks Department to implement.

One exceptional aspect of the Cully neighborhood effort was their leadership program. They have an 11 month leadership program for residents that want to build their voice, their power, and their capacity. Residents are paid for their time and are also supported with transportation and childcare needs — always operating in their native language, because many are Spanish speakers. They’re taught about the ways that change is made and the different points of intervention in the systems, so who to talk to, how to give a testimonial, etc. And then they’re empowered to do their own work to actually make change as a part of their leadership development.

For example, some of these leadership cohorts identified that it was really hard to bike or walk to school safely because of sidewalk flooding issues and also issues with poor lighting or challenges with feelings of safety. So they started doing neighborhood walks and neighborhood bike rides. This then led to the creation of their own wayfinding signage, which is all really culturally infused in really special ways that most wayfinding is typically not.

They continue to do really exceptional work. They’ve built a base of resident power that allows them to advocate for change. So they’ve been able to advocate to help the residents in a mobile home community retain ownership rights, for example. They’ve also been able to advocate for a bond for affordable housing as part of a citywide team in Portland. They’ve partnered with Habitat for Humanity to have a neighborhood-focused structure that’s much more about meeting people where they are and helping with their needs — not just building new housing, but actually helping people stay in their homes and build wealth via that homeownership. They’ve continued to implement the lens of anti-gentrification, anti-poverty, and green infrastructure through a political measure in Portland called Nature for All. They seem to continue to push the limits of insisting that environmental rights are human rights and that you should be able to stay in place and enjoy the benefits of improvement in your own neighborhood without feeling threatened by the positive change.

Despite the fact that we’re in the midst of some pretty turbulent and tumultuous times, you conclude your book on a positive note. What’s one lesson you find particularly salient?

The lessons that felt most important when I reflected on all this amazing work happening across the country were really about the gaps in the way practice happens right now — and how we might fill those gaps with this wisdom. Some of it is just honoring this intractable relationship between social and ecological systems. We are seeing this more in activism than we ever have before — that even just to have terms like climate justice allows us to think completely differently about these intersections between different parts of people’s identity. It also demonstrates the many possible ways that we might collaborate and might be innovative and find shared interests along the lines of both a love of environmental resources but also of social justice. I’m very hopeful about the future of that work because it’s already happening in really exciting ways in all sorts of activism.