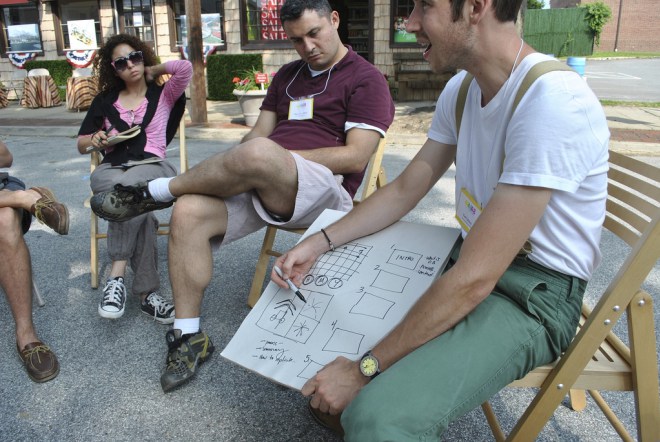 Community members share ideas and visions during a Lighter Quicker Cheaper planning workshop. Photo credit: PPS. This article, cross-posted from PPS.org, is part of a series on the many issues that converge in public space leading up to the Placemaking Leadership Forum (Sept. 14–17, 2016), where practitioners will chart the future of the placemaking movement and share concrete strategies to make it happen.

In the wake of Britain’s choice to leave the European Union, 175,000 citizens of London, where 60 percent of residents voted against Brexit, signed an online petition for the city to secede from the U.K., and Mayor Sadiq Khan demanded more autonomy for the City of London. While London may be facing a unique threat to its future, many cities in other countries can relate to the underlying sentiment. In the early 2000s, Canada had its own mayor-led urban sovereignty movement, the C5, which sought charters for Canada’s five largest municipalities to grant them province-like powers. In the United States, where the phrase “federal gridlock” is so common it has nearly become a cliché, some have called for a “New Localism” that empowers cities to address the many issues where Congress has had limited success, like sustainability and affordability.

But how far could this New Localism go? The same principle that makes urban devolution so attractive and plausible — that governance is most responsive and responsible when it is as close to the people it serves as possible — can just as easily be applied to even smaller scales of self-government.

When it comes to public space, neighborhood residents are too often removed from the stewardship of the places they share, with responsibility for management divided between government agencies with narrow objectives. Transportation agencies control traffic, planners allocate building use and density, parks departments resist new uses that could lead to greater risks or costs, and so on. While this “turf” mentality in government has often inhibited the genuine stewardship of places, many placemakers from around the world are at the forefront of inventing new models of Place Governance that test the limits of localism, exploring how and how far we can devolve governmental powers and responsibilities.

Dating back to the early days of PPS, we have been involved in the creation of new models of hyper-local organizations, complementing and facilitating our inclusive approach to improving public space. In the 1960s and ‘70s, neighborhood associations, Business Improvement Districts (BIDs), Community Development Corporations (CDCs), land trusts, park friends groups, and other community-based organizations stepped into areas that government had neglected, like public space management, and sometimes defended their constituencies against aggressive government intervention.

Today, such groups are more numerous and powerful than ever. For example, both the Dudley Street Neighborhood Initiative in Boston and the Cortex Innovation Community in St. Louis, two district-level organizations with very different missions, histories, and levels of privilege, have won the right to use powerful tools like eminent domain to serve their communities. Similarly, a program of the West Broadway Neighborhood Association in Providence, Rhode Island, to help residents buy solar panels has recently gone city-wide, and prompted copycats around the state. Massachusetts has even drafted new legislation to formally empower, clarify, and diversify such organizations. In other words, if some of our cities are doing more to address economic development, sustainability, and affordability than our federal government, some of our neighborhoods are doing more than our municipal governments.

But some municipalities have also begun to bridge the gap between community needs, knowledge, and aspirations on the one hand, and government resources, services and decision-making on the other. Like the rise of community organizations, these changes took root nearly half a century ago. In the early 1970s, for example, Toronto experimented with a number of decentralization initiatives, including devolving its city planning department to the district scale, and putting staff on site in the neighborhoods they serve.

As public resources and public trust have continued to diminish, however, and the private sector has left the age of bureaucracy in the dust, a handful of governments that haven’t cut costs, cut corners, or cut questionable public-private deals have become more creative and effective in the way they do business. Innisfil, a small community in Ontario, has removed its departmental silos to better integrate how its services come together in specific places. Boston’s New Urban Mechanics has experimented with a variety of pilot programs to harness community assets through technology and design. And perhaps most excitingly, Peter Smith, past CEO of Adelaide, Australia, turned the management and political culture of that city upside down by focusing on public spaces, and developing community capacity for Place Governance.

So, where do we go from here? At the Placemaking Leadership Forum this fall, we will build upon our previous meetings with placemakers and governance thinkers to kick off a campaign for forging the next models of Place Governance. Should every city have a Chief Placemaking Officer? Should municipalities reorganize their departments around place or give districts more power and resources to shape their public spaces? We need your help to set the agenda and make change happen.