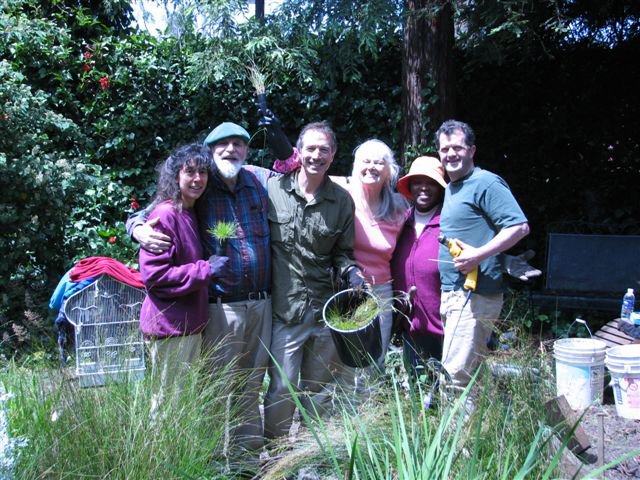 Laurence Schechtman is the founder and coordinator for Neighborhood Vegetables in the San Francisco East Bay, which he started four and a half years ago. Neighborhood Vegetables is a grassroots network of 2,500 volunteers who help each other plant urban vegetable gardens in their yards. Laurence is a long-time Bay Area community and political activist known for his tenacity. He helped develop a barter exchange called the “Labor Gift Plan,” was involved in civil rights and anti-war organizing during the 60’s, and created food coops called “Food Conspiracies” in the 70’s. At the ripe age of 69, he never stops. Everywhere he goes his message is, “We need to organize neighborhood by neighborhood.”

Mira: Where did the idea for Neighborhood Vegetables originate?

Laurence: My first experience was in People’s Park in Berkeley in 1969 where I planted a lovers’ circle made of bamboo and lots of people came out and planted gardens in the Park.  I saw that they really enjoyed doing it. So in the early 70’s, I went to a nearby adult school and asked the students, mostly lower income people of color, to help me dig up some land a couple doors down from my house and promised to feed them lunch. About 10 kids came out and we had a wonderful time creating a garden together. Although I am not much of a gardener,  I am a community organizer.

Then I got into local politics in 2003-2004 and started a political party called the Berkeley Progressive Alliance. It had a lot of members, ultimately, though Progressives were not even nominated by the Alliance. I realized that you can’t create a movement for progressive politics without building community first, where people actually talk to each other.

Mira: How did Neighborhood Vegetables start?

Laurence: It started at the Unitarian Fellowship in Berkeley. I showed a film there called “The Power of Community” which told the story of Cuba’s oil crisis and the struggle to rapidly implement organic agriculture in the face of growing starvation. One hundred people came to the screening. I signed them all up to Neighborhood Vegetables, had them fill out a questionnaire about their gardening needs, skills, and resources, and gave them a leaflet. Then we put in a vegetable garden at the church which remains today. We started organizing garden work parties for people’s private yards. It was tons of fun. The homeowner would cook us lunch, we’d bring more food as a potluck, and people would bring musical instruments to play music while gardening. Although people had committed to staying from 1-5pm, they often stayed until 7pm. The core group grew as regulars kept coming back.

Mira: How do you organize Neighborhood Vegetables?

Laurence: Mostly through phone calls originally. Then it got too big and even though I’d prefer face-to-face and phone organizing, I had to start an email listserv. Now I send out two emails a week announcing the garden work parties. We ask the party host or homeowner to help organize by knocking on neighbors’ doors with fliers in hand as well as contacting their friends, in addition to the listserv posting. There are usually 10-25 people at each party and we do 2-4 parties per week. We borrow the tools from the local Tool Lending Libraries, get free horse manure from a private property and free compost from the City. We do sometimes have to pay for added soil and wood for raised beds, which the owner pays for. I categorize the participants as skilled or not and Permaculturists to match up people who don’t know much with people who do.

We seek out gardens that need work, then we look at the land to see what’s needed in terms of skills, materials, and tools. We gather the materials and borrow a truck from someone. We draft a letter with input from the homeowner and send it out to the list, though I prefer in person contact.

Mira: How has it grown?

Laurence: I am a good salesman and it’s a good idea. I recruit mostly at Farmer’s Markets and churches.

Mira: Do you ever work on vacant lots or on apartment balconies?

Laurence: We have done two roofs. There was at least one lot I could remember, and also we helped organize the Occupy Oakland guerrilla garden in Oscar Grant Plaza. We have broken up sidewalks and driveways (on people’s private property) to put in the gardens and use the concrete, also know as “urbanite” to provide structure for the raised beds.

Mira: Do you ever match up people with gardens with people who don’t have gardening space?

Laurence: Yes, especially for elderly and disabled people who can’t garden themselves. They pretty much give their garden to the gardenless to take care of it.

Mira: What has been your greatest challenge?

Laurence: To decentralize the organization to the neighborhoods, with a leader in each neighborhood to make it sustainable. I believe we should have a central collective for things like policy, but it should be autonomous neighborhood collectives doing this. Part of my challenge is that it’s a 7 days a week volunteer job. I’ve been trying to switch it over to a collective. It’s hard to find time to run the program and organize to build the collective.

Mira: What is your goal?

Laurence: The goal is to garden with your actual neighbors, to get to know them, and form community and integrate with the neighborhood associations. In the future, I’d like to expand these exchanges to other service areas, like babysitting or massage, in a barter or gift exchange system.

Mira: What would you do differently over the last four years?

Laurence: I’d have started out in just one neighborhood, worked intensely there to make it really dense, and used that as a model. I wanted to do that, but I moved in the middle and that made it difficult to organize my neighborhood.  I also would have started it out as a firmly established collective with friends who get along, instead of random strangers.

Mira: Have you heard of this elsewhere?

Laurence: I got a call from an Orange County Democratic State Assemblyman who wanted me to come down there and show them how its done for Occupy Orange County. In Brooklyn there is the Konbit Haitian school community garden. Detroit is filled with urban gardens now. More specifically Neighborhood Vegetables’ strategy is probably similar to efforts in Portland, Oregon. There is a garden installation program in Oakland, called City Slickers, but it more like white college kids coming in and putting in gardens in Black folks homes. There doesn’t seem to be a lot of community building going on.

Laurence: I love riding home everyday past this woman’s garden we helped put in. She is often there watering as I ride by. Some of the gardens are really beautiful, especially the permaculture ones, like the food forest, which is more like a food jungle.