The intersection between open source, with its emphasis on free use, modification and sharing, and a circular economy which produces no waste, is an exciting and increasingly important one.

The upcoming Open Source Circular Economy Days (OSCEdays), which runs June 9-13, is an an open, distributed and globally connected event to advance OSCE thinking and designing, and expand the global network of creators and collaborators. Now in its second year, OSCEdays will take place in an estimated 70 cities around the world, including Cape Town, Havana, Mexico City, Vancouver, Berlin, Chicago, Shanghai and many more. To participate, find an OSCEdays event near you.

Shareable connected with Sam Muirhead, Lars Zimmermann, and Silvia Leahu-Aluas from the OSCEdays Board of Stewardship during a recent Ask Me Anything on the organization’s community board. Here are the highlights of that conversation.

Shareable: What was the original inspiration for OSCEdays?

Lars: The idea came up in a call in 2014 between activists in Paris and Berlin. Open source and circular economy seemed, and seems, like the perfect combination. Both worlds have problems that the other world could solve, so it’s a possible perfect synergy. But in late 2014 there was no discourse about it in the world at all (except from a small website/project I was running for some years).

We decided to launch this question together on a global level with a global hackathon because when there is no "Open Source Circular Economy" there is nothing to show and tell and talk about. We could use the energy of an event to create it.

What's the importance of having an open network designing OSCE Days and for events to be distributed and open to local organizers' vision and design?

Lars: I think in a globalized world, a circular economy needs to work on a global level. It needs to be possible that products made in China can be repaired, reused, remanufactured and recycled also in Africa, Australia, Europe and so on, and the other way around.

So, we need to invent it, to a certain extent, together and in collaboration with each other, and we can probably learn a lot from each other. Working circular practices can be found everywhere in the world and can be exported to other countries.

Sam: There are three reasons:

1. Necessity: We don't have funding or institutional backing, so even if we wanted to, we just don't have the resources to organise one single, large-scale conference, or to manage multiple events. We can't afford to spend our time making publicity material and subpages for local events, organising sponsorship etc. It is much more effective to provide local organizers with the resources and guidelines to do it themselves, and it's also really fun to see what people do. Jenni Ottilie Keppler created a modular system for this year's design, and provided people with the files, some guidelines, and the permission (CC-BY license) to remix it.

One of the local reworkings of Jenni Ottilie Keppler's modular design system.

It's also more resilient this way. If something happens to the initial organizers, or they decide to leave and work on something else, the network can adapt and continue.

2. A Global Movement: Our goal with the OSCEdays event is not just to promote an idea, but to connect people who are doing similar things around the world, give them a framework, an effective methodology, make their work visible and build collaboration.

The initial group that kicked this off was based in Germany, the UK and France, but we wanted to build a global network. We cannot hope to know how to build a community around the OSCE idea in Shenzhen, or Togo, or Bogotá, so we shouldn't force them to do things our way.

As an example, we had a discussion about whether people could charge money for tickets to OSCE events. We quickly realised that different cultures would have different expectations of what a paid event signifies in terms of quality and commitment. There would also be different abilities to pay for tickets. So, each local organiser can make that decision for themselves.

3. Ethos: One of the initiators of OSCEdays, Timothée Gosselin, sometimes talks about trying to be 'straight in my shoes' which is when you're practising what you preach, living according to your principles. Our principles are that you can't expect to know who may have a solution or idea for your particular problem. If we were to invite only people who we picked out as 'relevant' to OSCE, then we would miss people. If we required that local events had some level of institutionality, or that they could pay a fee, that would exclude many people who could potentially unlock all sorts of interesting ideas and collaborations.

It wouldn't fit with our open source ideals if we tried to do everything ourselves, or didn't give people permission to build on our work. It also wouldn't make much sense to organise an event on sustainability and then fly all the participants halfway around the world!

You hope to attract people from a diverse range of fields. How does this support your vision of an open source, circular economy?

Silvia: We view the open source circular economy as the solution to the enormous gap created by human civilization between nature and artifacts. Economy itself is an artifact which, in its current modus operandi, is leading the world on an unsustainable and dangerous path. We want to bring people from all over the world to work and create as close as possible to ecosystems, where diversity and mutual benefits are fundamental to surviving and thriving.

In nature, there are no patents, which is where open source comes into place. Patents and other forms of intellectual property protection are another artifact that, first of all, are based on everything we find in nature and, second, prevent us from adopting, at global scale, the solutions to the wicked problems humans have created: climate change, wealth inequality, poverty, habitat destruction.

By bringing people from different fields of expertise and different places in the world we will accomplish several goals: 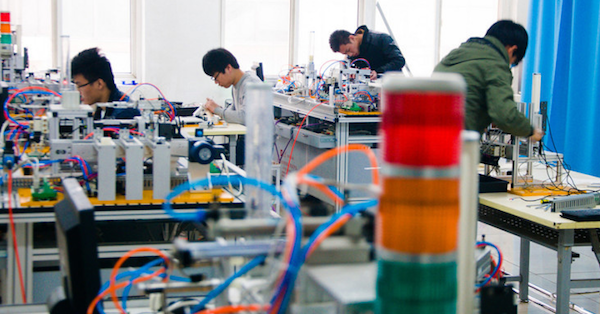 OSCE Days emphasizes hands-on action rather that traditional conference presentations. What kind of outcomes do you hope to see?

Lars: OSCEdays 2015 was globally mostly about discussions. People needed to understand the concept(s) first. This year I hope to see more practical outcomes. One of the outcomes that would be great to have is to see more open source documentation of existing technical circular economy solutions. And that real hardware projects make huge progress in finding new ideas, collaborators, and step [closer] toward openness.

This intersection of open source and circular economy thinking is really fresh and exciting. It points to a new way of being in, and thinking about, the world. What are the most important aspects of this intersection? Why is it so inviting and who do you see getting involved on an organizational level?

Lars: The circular economy has the word "economy" in it. And in today’s world, almost everything has to do with economy. It would be great to have almost all organizations involved, from small grassroots initiatives to large multinationals.

Some people are asking us, why we use "circular economy" as it is a term of the "big businesses" — think of the Ellen MacArthur Foundation's (EMF) Circular 100 with big brands. Why not Zero Waste, Blue Economy, Biomimicry, Cradle To Cradle, Regenerative Design and so on? There are many people that have been working in this field for a very long time. For example, for years I was looking for the correct English translation for our German term "Kreislaufwirtschaft" ("circle-run-economy"). Never could find it! I used "Regenerative Design" or "Ecoeffective Design" or "Ecological Economy" for years.

But in the middle of 2014 Wikipedia started to translate it with "circular economy". This was because the EMF had [created] a lot of buzz. They are working towards a critical mass and, with their marketing skill, they got big companies on board and to sign up to the concept.

Now we take the words and connect it to the grassroot level to establish a dialog. In a circular economy everyone needs to be able to talk to everyone. Only with collaboration we can achieve it. And, it seems unlikely that the big companies will take a grassroot term. But the other way around it might work and it has so far. We have small grassroots [organizations] as well as some big companies being part of OSCEdays. In our chosen wording, our wish to establish collaboration across all levels is expressed.

What's the big picture for OSCE Days? What would you most like to see happen?

Sam: We have started this as an annual event, but the plan is to have more and more events in different places at different times, and ongoing research and development projects. We’d like to transition from 'event' to 'network' to 'movement' to, eventually, 'normal'.

The long-term goal for all of us is a working circular economy and a more collaborative society that empowers citizens and regenerates our natural ecosystems. But that's a long way off.

For me, the goal in the mid-term is that the idea of circular economy becomes linked to the idea of open source. For example, in the field of cryptography, it is generally accepted that open source software is a more secure option, based on a number of theoretical and practical factors. If it's not open source, you can't trust it.

And, if public funding is being awarded for circular economy solutions, then of course it should be a prerequisite that they will be open source.