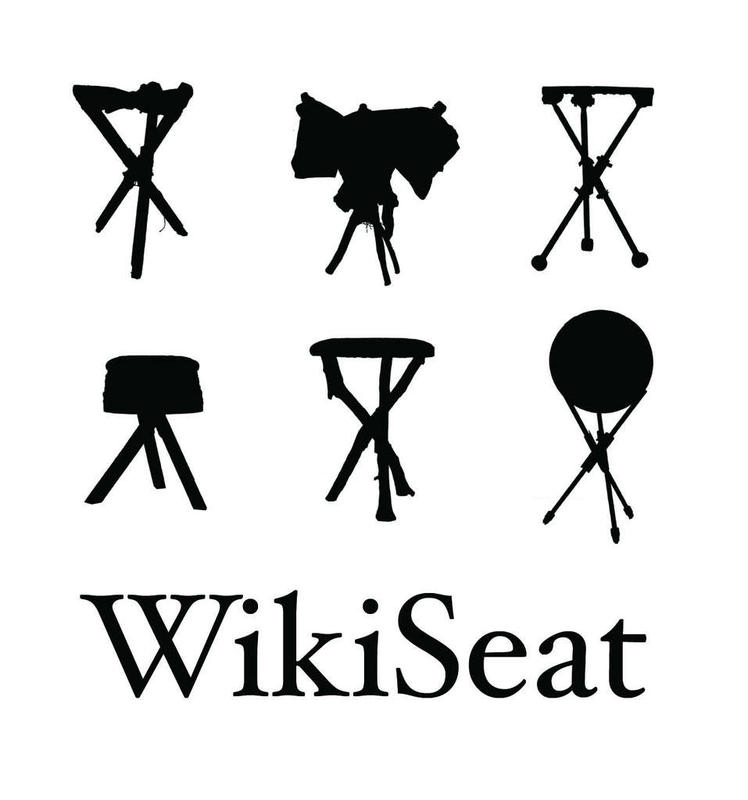 I want everyone to feel confident in their power to make things with their hands, process information, and use their imagination. I want to see a future where we're all able to help each other, freely share information, and feel no fear of failure. I hope to help make this happen with a Catalyst, named for its catalytic properties in the world of seating (see catalysts pictured below in the box marked "WikiSeat"). Now this Catalyst, unlike some others, catalyzes the production of a seat, a WikiSeat. By making this seat, I hope that folks will be inspired to create, share ideas, and collaborate with others. The Wikiseat team is going to give 5,394 Catalysts to students of all ages, from first grade to adults. We have asked that they all build seats. There are educators from all over the world who are going to be teaching their students about design, literature, math, science, English, physics, theology, and life by having their students build seats.

They might sit there with their Catalysts and think, "Where do I start? I've never built a piece of furniture before.” There maybe people reading this who are master craftspeople, but the sad reality is that most shop classes in this country have been cut out of public schools. We don't really have many opportunities to make things anymore. Even though we live in a world filled with dining room tables and armoires, you've probably never built a piece of furniture. I am providing the Catalyst which I believe can open new possibilities. I'm doing this because I believe these awkward pieces of angle iron can fundamentally change how we educate and learn.

Let’s go back to the beginning of my story. I have a passion for building things, and strong opinions about what education could be, because of how public education failed me, and how learning has helped me. This is the story of how I have found myself evangelizing awkward bits of metal.

I grew up in Norman, Oklahoma, and later moved to Colorado, and then back to Oklahoma. For most of the country Oklahoma is either home to Sooner football, or is one of those states you fly over on your way to one of the other exciting, more populated parts of the country. Oklahoma is also home to Woody Guthrie and the very first copyright that could be considered what we now call a creative commons license.

It's in Oklahoma that I learned the value of labor (our state motto until recently has been “Labor Conquers All”), and the joy found in making and sharing what you’ve made with your community.

The first thing I can remember ever making was a cross-stitched cat, from a kit my mom had gotten for me from the Hobby Lobby. I gave the finished product to my mom as a present. She loved it, just like mom’s love everything their little girls give them.

Throughout my whole life, both of my homes, as my parents were divorced, were in varying states of production, construction, and development. We always had a garden, and my mother made my clothes until I was old enough to want to look like the other girls at school. Both of my homes, with my mother and father, were centered on a community built from the collaborative process of creation.  There was never a time growing up when there wasn’t some adult around me building or making something, and then teaching me how to do the same. 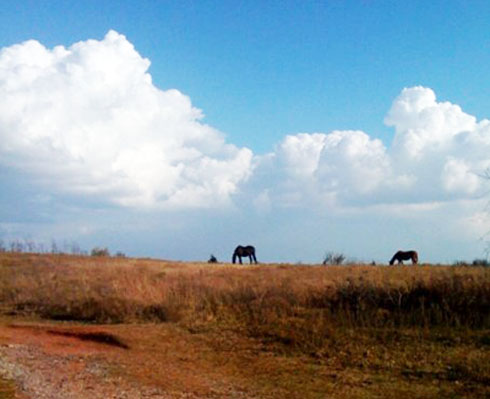 As I grew older, by older meaning when I could properly swing a hammer, my folks had me share in the labor. My mother had me help tear down a chimney in our house in Colorado, and my step dad had me help design things like the fence surrounding the back yard garden. We spent our weekends improving our home, or helping out around the community by lending our maker skills.

This sparked an interest in how things work, and to know how to make most everything I own. So in high school I signed up for shop class. I wasn’t as interested in wood as I was metal, so I took a few semesters of welding and metal lathing, gaining experience and knowledge from my shop teacher. I was one of the few girls in these classes, which bothered me then, and still bothers me.

When I moved back to Norman, Oklahoma in my sophomore year of high school, I found that my new school didn't have a shop class. I ended up dropping out of school at 16 because of a lack of community. I had no interest in class because it was too abstract and the mechanisms I used to shield myself from a confusing world were gone — creating things in shop, theatre, and band. Eventually, I went back to school to get a bachelor’s degree in the history of science at the University of Oklahoma. To me, history of science is a way to understand the world by studying the things we invent, and the context surrounding them when they’re invented. Historians of science, and historians in general, tend to be advocates for free culture, which piqued my interest in the free culture movement. While at the University I attempted to start a chapter of Students for Free Culture (SFC).

This attempt was inspired by a conference I went to in New York City, hosted by SFC. This wasn’t my first introduction to open source stuff, as I had been using Linux for a few years by then. But it was my first time meeting a large group of people, outside of family and friends, who were as passionate about sharing as I was. I loved the environment, and learned a lot, but my biggest complaint, and initial let down was the lack of “physical” open source stuff. It was all coding, and Internet, nothing physical, nothing that didn’t require a computer and an Internet connection.

Coming from Oklahoma, I know people to this day that don’t have Internet connections, and many more who do not own computers. This way of sharing information is simply not practical for these parts of the world, yet.

So how do we teach people about open source without the Internet? How do we tell people that there is an entire big wide world out there that is all about sharing freely, information, ideas, and collaborating with one another? In schools, by person, through the mail, with awkwardly pieced together bits of angle iron, that’s how. 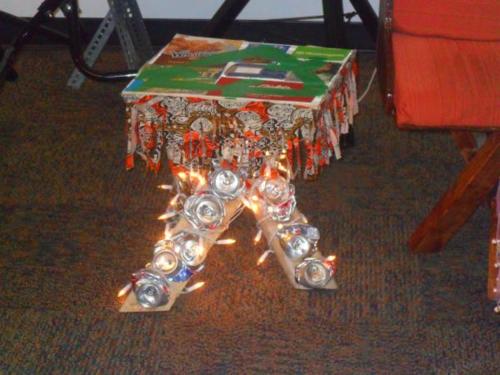 This April, I bought a ticket to San Francisco, to go to another SFC summit, but instead of spending my time at Berkley where the summit was, I spent my time absorbing the brilliance of San Francisco's people. I was introduced to creative people who are finding new ways to share more things and ideas with more people. It was because of this I came back in June, and that's when I met Nicolas Weidinger.

During our initial meeting I didn’t know about WikiSeat, but I was shortly introduced to the project. Over the next few months, I discussed WikiSeat with Nic and he told me the story of its birth. Where he was sitting in his apartment back in Ohio during school, thinking to himself, “Maybe I should make a seat, for this assignment.” Then he told me about Sean Wheeler, and shortly after that I found all of the documentation from Wheeler’s American Literature class last year. I read their stories, and looked at pictures of their seats, I thought to myself, “I wish I had done this in school.”

A few weeks later, after I had gone back to the ranch in Oklahoma, Nic messaged me on g-chat, “So I’m thinking of doing a kickstarter for WikiSeat.” I may have felt some envy, hearing about how Nic was going to be doing this cool thing, and I was stuck in Oklahoma staring at a bunch of llamas on my dad’s 25-acres. Even so, I immediately started to send him links for educational grants and asking how I could help.

At the time, I didn’t know exactly why I felt such sudden fervor to help, and would normally attribute it to my new found crush. In hindsight, it was because I had seen what this project was to those kids in Ohio, and what it could mean for kids like myself when I was 15, remember that girl without shop class lost in a sea of standardized testing.

So, I decided to get out of Oklahoma, and head west, to begin my own Grapes of Wrath journed. I bought my one-way ticket from Dallas, Texas, to Oakland, California for $200. I drove the hot (113° F hot), three hours down to Dallas from Norman in order to get on my plane. I left my car with a friend in Texas, and didn’t tell anybody that I didn't plan to return.

After that, I got on a very dangerous bus and headed, with Nic, and the Noisebridge hacker community to Torcamp. I won’t get into the details here, and will gladly tell this story later, but let me tell you about two very important events.

Nic and I built a zome, named the Tower of Consenso, which had been designed by Chris Palmer, and constructed by Noisebridge hackerspace. In theory, this zome was an awesome idea, but in practice it was cantankerous. So for a number of hours, Nic and I carefully put the zome together in three separate sections so that it could be erected to do whatever it is giant towers do. 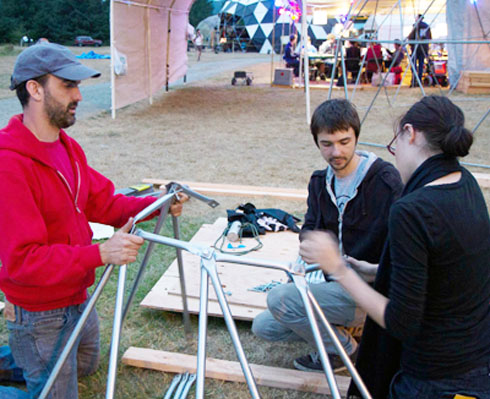 After this, Nic came up to me, that is after this metal monstrosity was pointing to the stars, and asked, “Hey, would you like to come to Maker Faire with me? I think I need help with this WikiSeat project.” So, seeing as I wasn't heading back home, I said yes, and here I am now.

WikiSeat was originally an open source furniture design platform, but it has evolved into something very different from that. It's a way in which anybody can experience creation, for themselves, in any setting. This project helps students grasp and explore four key concepts: critical thinking, creativity, collaboration, and communication. Otherwise known as the 4 C’s of 21st century education. This is the type of thing that engages students, it gives them a channel to express themselves and something to be passionate about. This is the type of thing I would have loved to do when I was in high school, or at any age. In fact, this is the type of thing I love to do now, and I want to share that love with as many people as possible.

Find out more about WikiSeat at wikiseat.org.  Please check out our Indiegogo campaign too.

Alaric Moore is from Norman, Oklahoma, but currently resides in San Francisco, California. At this time she is working on the WikiSeat Project, which is an initiative to try and

Alaric Moore is from Norman, Oklahoma, but currently resides in San Francisco, California. At this time she is working on the WikiSeat Project, which is an initiative to try and bring a shop class like experience into non-shop-like classrooms. You can learn more about this project at their Indiegogo page. She has spent most of her life playing in the red dirt outside on her family ranch back home, contemplating what lies beyond the horizon. She has a strong interest in maker education and the futures possible therein. She also occasionally posts small bits of philosophy (and other nonsense) on her personal blog.