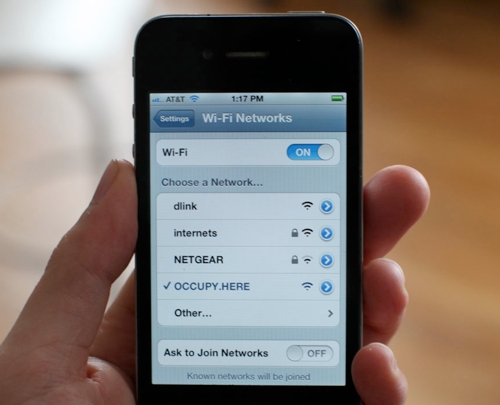 Could the distributed, peer-to-peer Next Net that Douglas Rushkoff envisioned last year emerge from the Occupy movement? Possibly: Occupy.here looks a lot like a pre-alpha version of Rushkoff's grand idea.

With the Department of Homeland Security (DHS) monitoring blogs and social media for allegedly inflammatory terms such as "radical", "cops", and "social media", it doesn't take much imagination to surmise that tweets and posts from Occupiers are being mined and scrutinized by the DHS and other government agencies. Just ask Shareable's Malcolm Harris (or better, his lawyer). For those on the ground and their supporters, Occupy.here could pose a more agile alternative:

[Occupy.here is] a peer-to-peer network of virtual spaces (autonomous from the Internet) for open political discussions. Anyone within range of an Occupy.here wifi router with a web-capable smartphone or laptop can join the network “OCCUPY.HERE,” load the locally-hosted website https://occupy.here, and use the message board to connect with other users nearby. The open source forum software offers a simple, mobile-friendly interface where users can write messages and post replies.

The project has developed in parallel with the Occupy movement and seeks to offer a new kind of venue where both committed activists and casual supporters can engage with each other. The project complements the work of the Free Network Foundation and official NYCGA working groups who have been providing critical infrastructure to the OWS movement. Occupy.here is more about supporting an emerging community through decentralized hardware and location-specific websites. 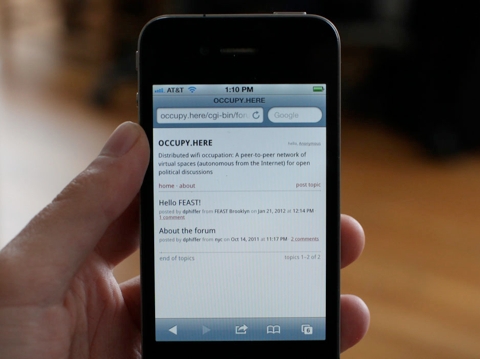 Artist and web developer Dan Phiffer started building the network last October to "create a written supplement to the spoken conversations [he] was enjoying in Liberty Square (aka Zuccotti Park)." Since then, GitHub user Phaelio joined the project, and Phiffer made an open call for contributors from the larger Occupy community.

According to Phiffer, Occupy.here can be installed on a wifi router in minutes, though the process is currently only for the tech-savvy (something Phiffer hopes will change.) Once an occupied router is up and running, any wifi-enabled device can access the Occupy.here message board. The process through which each instance synchronizes data with other nodes is quite ingenuous, something like a cross between a mesh network and a sneakernet:

The forum’s syncing mechanism allows conversations to intermix between different wifi routers using JavaScript’s localStorage mechanism. Each user can copy the local forum’s database to their mobile device or laptop and sync it with subsequent Occupy.here nodes they encounter in the future. The process works a bit like a honey bee sharing pollen between flowers. 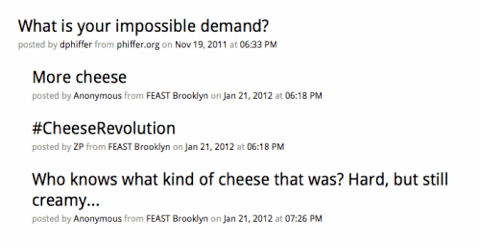 Occupy.here doesn't require personal authentication—users can create an account, or log in as Anonymous—which means that anyone can log on to the network, both a blessing and a curse when considering the prying eyes of government agencies. But as an agile, distributed, and peer-to-peer alternative to the increasingly centralized and monitored Internet, Occupy.here is a promising start. You can try the demo instance at Phiffer's site and contribute to the project on GitHub or through donations.