More than crisis care: Mutual aid for the pandemic and beyond - Shareable
Skip to content 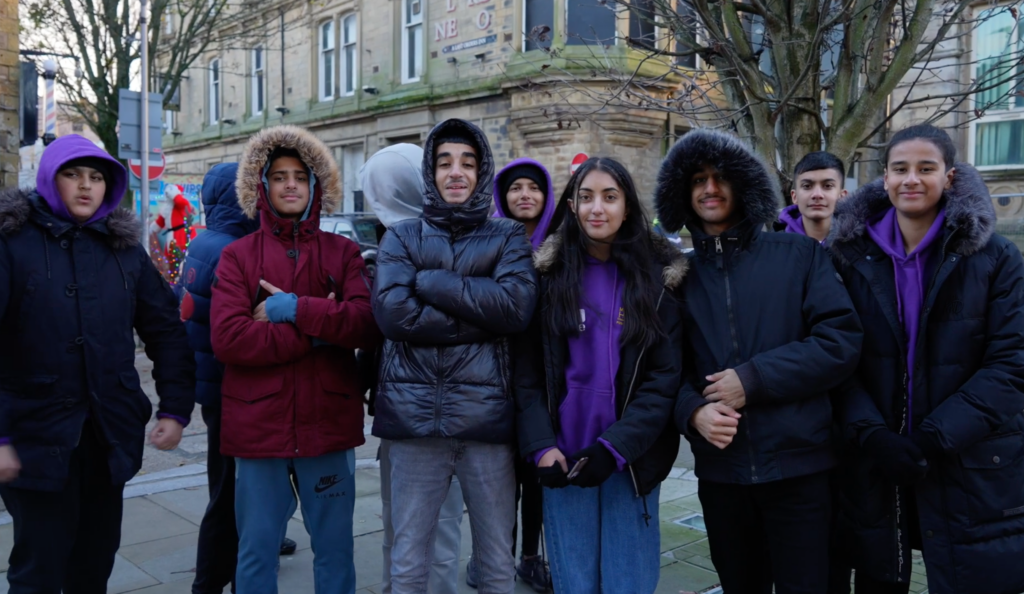 The mutual aid efforts of student organizers from Marsden Heights Community College in Lancashire, England were just some of those covered in the new documentary film From Below. Credit: UKRI Arts & Humanities Research Council

Mutual aid groups were a lifeline for many during the pandemic. In the face of near constant loss and uncertainty, neighbours and communities came together to create networks of food provision, emotional support and more.

Emerging from the Covid-19 pandemic, The UK — like many global communities — remains an economically-precarious and socially-traumatised place. Adding insult to injury, we are now facing a cost-of-living crisis. A growing number of people are requiring help to secure adequate housing, food and shelter. Now more than ever, the mutual aid groups that acted so vitally during the pandemic continue to be needed.

From Below is a feature length documentary film (now being screened across the country) that showcases the human, emotional stories of the mutual aid phenomena. The film also highlights the ways mutual aid can continue to be used as a force for change in a post-pandemic future. The wider research that the film supports is an examination of the people at the center of these crisis care mutual aid networks as well as the barriers and pitfalls they faced at the height of their practice. 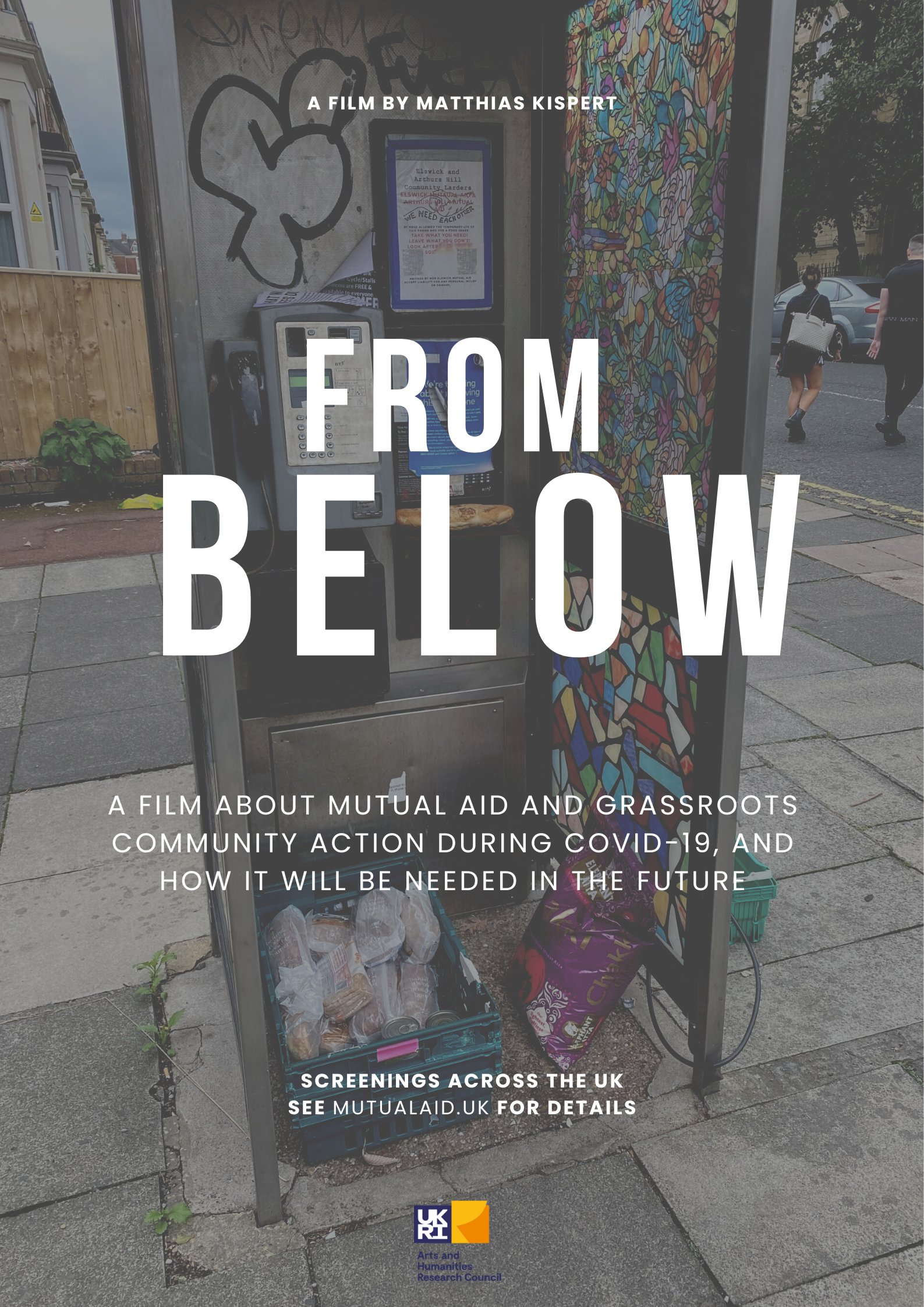 Emotional burnout was the primary problem faced by many volunteers and organisers. Many of them expressed their exhaustion, explaining that the lack of time for self-care and (in some cases) inability to access necessary mental health services contributed to their fatigue.

In other groups, a lack of a functional space hindered their work, which made it difficult to pack bags and cook meals for sometimes hundreds of people. Lack of operational skills affected some groups: team leaders and members sometimes lacked co-operative and team-work skills, had little food safety experience or little financial expertise. Often important vehicles to continue working (such as a bank account to collect donations) were difficult to obtain due to the group not being recognised as an ‘official’ institutional form, i.e. a charity or community interest company.

Supporting the vital work of mutual aid groups means rejecting the assumption that their work must be executed in an institutionalised format in order to be effective.

In fact, our research indicated that it was mutual aid groups’ flexibility, malleability and precisely non-institutional form which was their strength. During the pandemic, people were quick to identify needs in their local community, utilising intimate and ‘embedded’ knowledge of local provisions in order to better mobilise resources.

Schoolteachers and outreach workers knew vulnerable families by name and, as such, were able to share their information with mutual aid organisers who were able to directly provide them with resources. Activists maintained relationships with undocumented asylum seekers. Faith group leaders had intimate knowledge of the needs of their congregation. Residents knew which local community spaces had the correct facilities to be used as a distribution centre.

All of these organisers operated cooperatively, forming a cohesive, localized network of solidarity. If mutual aid groups were to be asked — or forced — to institutionalise their work would be hamstrung, affecting their ability to act swiftly and nimbly. Moreover, and perhaps more importantly, many mutual aid groups operate as political entities as well.

It was a common thread among all the mutual aid groups that we spoke to that the more people got involved, the more they became aware of the social and political contexts that made people vulnerable in the first place. Some said that they “had their eyes opened” to the unfairness of the benefits system, and were able to sympathise with people who they would otherwise judge.

These spaces brought together people from across class divides, creating spaces of learning, empathy and in some cases, radical solidarity. Some groups even merged their food and social services provisions with political action, often referred to in the academic literature as ‘prefigurative politics’. Institutionalising these groups to become more like hierarchical charities would be entirely antithetical to their political rasion d’etre.

They can also make spaces available for mutual aid groups (community centres, social clubs, kitchens etc.) and simplify grant application processes, introducing them to emergency funding in times of crisis. The implementation of national level policies (such as a 4-day working week and universal basic income) would also aid mutual aid efforts by providing organisers with the free time and vital emotional energy needed to do their work. These are just a few examples of what could be done. Our Manifesto for Mutual Aid provides a full list of our recommendations.

Whether we turn our attention to the pandemic, economic inequity, or increasing climate catastrophe, the reality is that we are living in the age of multiple crises. Mutual aid has proved over and over again to be the most effective form of support for many communities in precarious times, but its effect can stretch far beyond that.

As we navigate these compounded crises, it is time to not only acknowledge mutual aid’s ability to address the needs of those most vulnerable, but also support those doing the work of keeping these vital networks afloat.

Oli Mould is Lecturer in Human Geography at Royal Holloway, University of London. His work focuses on issues of urban activism, social theory and creative resistance. He is the author

Oli Mould is Lecturer in Human Geography at Royal Holloway, University of London. His work focuses on issues of urban activism, social theory and creative resistance. He is the author of Urban Subversion and the Creative City and blogs at tacity.co.uk.