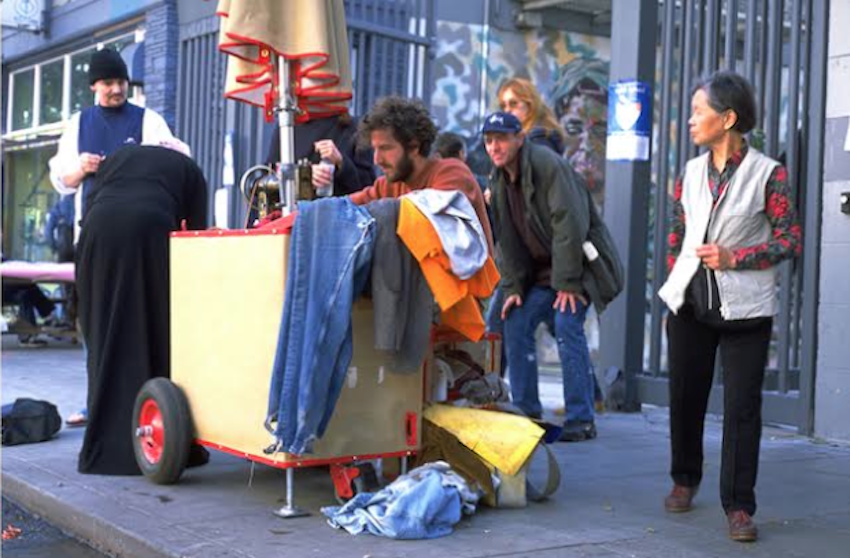 Travel guides generally warn tourists to steer clear of the Tenderloin District, San Francisco's version of skid row. For 14 years, however, Michael Swaine mended clothes for people in the heart of the district. Once a month, he set up his cart, with its antique treadle sewing machine, and got to work repairing pants, tops, jackets, bags, or whatever else a needle and thread could save.

“I understand why some of those comments are out there,” he says, “but in most cases, the violence I’ve seen is violence from one drug dealer to someone who’s buying drugs. I’ve seen horrible things happen, but It’s rare that something even slightly horrible would happen to people who are sitting around mending together.”

The mending cart started as a traveling project, but Swaine quickly learned that carting a treadle sewing machine around hilly San Francisco was not sustainable. He connected with Darryl Smith and Laurie Lazer of the Luggage Store Gallery, who offered to store his cart and let him set up in their alley, which they have transformed into a community space dubbed the Tenderloin National Forest. With their help, Swaine created a life-changing project. 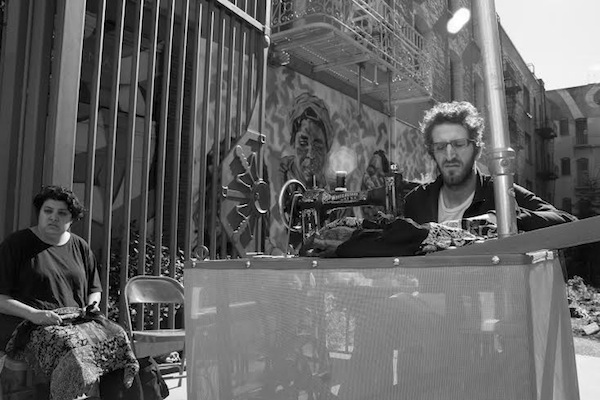 Michael Swaine at work on his antique treadle sewing machine.

With his sewing cart out on the sidewalk, Swaine started connecting with people in unexpected ways. Conversations with the neighbors might initially be about the treadle sewing machine and a memory someone had of it, but often these chance encounters would lead to deeper conversations.

“When you realize that a stranger has let you into their life,” he says, “and you’ve said something that you wouldn’t think you would have said—whether it’s sharing about being married, or about your father dying—for me, that’s a big part of why I keep coming back. Those second conversations are the reason why it’s lasted all these years.”

There were also many moments of connection between people gathered around the sewing machine, waiting their turn, or just swapping stories. Swaine recalls a time when a business person in a nice suit, a minister, and a drug dealer were all standing around talking about the sewing machine.

“I’m hearing the conversation,” he says, “but it doesn’t involve me anymore. Those are some of my favorite moments—when I see what I enjoy, the secondary effects of the project, and they're happening to other people.”

At the beginning, Swaine wasn’t sure how he and his sewing cart would be received, but he wanted to give it a try. When he pulled the cart out for the first time, the neighbors were noticeably checking him out. A local man, whose name Swaine would learn is Moses, decided to give him a chance.

“He looked at me like, ‘I’ll give you a try, I’ll see how this works,’” says Swaine. “Moses let me hem his pants. Then he became my, kind of, advertiser.”

Described by Swaine as a big man with a big smile, Moses is beloved by everyone in the neighborhood and is “the most kind soul.” By the end of the first month, Moses was yelling across the street, “The sewing guy is here—he can fix your stuff.”

“There was still an arc of neighbors understanding me and me being there,” says Swaine, “but I was impressed with the speed, and the kindness, and the trust.” 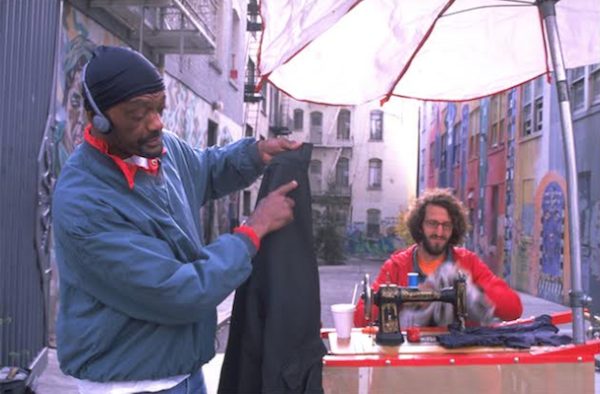 After the initial six month project, Swaine knew he wanted the mending library to continue.

Swaine originally thought the mending project would run just six months, but when that time was up, he realized he wanted to continue—that he was receiving a great deal from the experience.

Around the five year mark, Swaine realized that the project was “kind of inherently more about me than I wanted.” People told him it was so nice what he doing, that it was so kind of him. But Swaine found that the honest thanks he received from someone who brought him a pair of jeans, with a tiny hole in them, that took 10 minutes to mend, made him incredibly grateful.

“I appreciate all of the things that I’ve seen and experienced,” he says. “I’m thankful in the other direction—thankful that this has happened to me and that this has become such a part of Ellis Street. To really feel a whole neighborhood or street take you in, I feel thankful.”

Over the years, countless people have sat next to Swaine and helped with the mending. There have been many donations of thread and even sewing machines, and Swaine and the other sewers have taught people everything from how to sew a button on to how the treadle machine works.

This summer marked the end of an era when Swain accepted a teaching position in Seattle and passed the mending library torch to Laurie Moyer, who has been sewing alongside him for the past year. 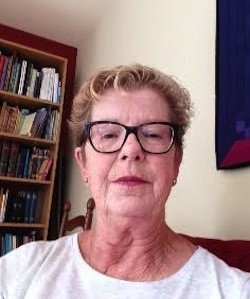 This summer, Laurie Moyer took over the mending library.

For Moyer, taking over the project has been an adventure. She likens the neighborhood to “a kind of Sesame Street,” with all the street activity she remembers seeing when her children watched the show in the late ‘70s and early ‘80s. She has several volunteer helpers who are all learning that the treadle is hard to work, and that life on Ellis Street in the Tenderloin is exciting and even a little scary at moments.

“The scariness kind of adds a little bit of a thrill to the experience, I think,” she says. “We are mostly ladies of a certain age so I think we are quite gutsy to take this work on.”

Moyer has more helpers than when Michael ran the project, and they all bring their own portable electric sewing machines. Many of Michael’s customers continue to come, but one woman named Veronica, who was a regular visitor, has not been back for the last two months.

“I am sad about that,” says Moyer. “I think Veronica was very sad to have Michael leave. She trusted him and confided in him.”

Moyer has found that the most valuable lesson in the project so far is that people bring their clothing to them in trust, and they must work within that trust to do the best they can.

“We realize that these garments are as valuable to them—no matter their condition (and some of them are way beyond what most of us would repair or alter for ourselves)—as ours are to us,” she says. “We come to serve them as best we can. We must respect their desires, and our clients, and we do the best we can to meet their expectations.”

She explains that another part of the experience, however, is learning to establish boundaries as sometimes clients or passers-by “think they can be abusive.”

“I’ve grown some moxie,” Moyer says. “We all have to behave within reason.”

Moyer’s respect for the neighborhood is rooted in an awareness that it is a place of pride for its residents.

“We come into that place and try to serve them as best we can,” she says, “but part of that service is to understand our place as people who need to respect them, and their neighborhood, and its gifts and delights and its problems.”