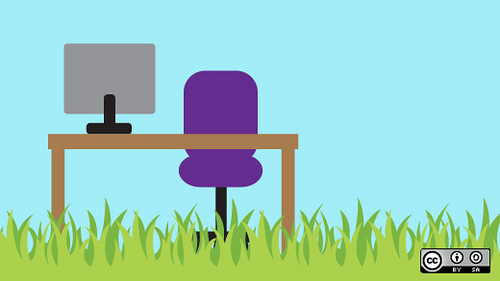 If it feels crazy out there, that’s because it is: we are in the midst of an economic revolution.

Revolution, you say? Aren’t we just experiencing a bit of economic indigestion?

History suggests that what our generation is going through right now is much more than a hangover from a period of excess. Across the sweep of recorded history, there have been four “mother” moments — periods of economic revolution where everything changed. In every one of these periods, there have been two conspicuous factors present: the emergence of a new energy paradigm, and the adoption of a new communication paradigm.

So let’s take a quick walk through history. 8,000 years ago, the first revolution took place. What caused it and what changed?

Stored grain represented a new energy paradigm as society moved from hunting and gathering to agriculture. Communities were for the first time able to anchor and organize in place, rather than following the food supply. Written language emerged as the new communication paradigm, transforming the ability to chronicle and disseminate ideas and histories. Physical communities formed, structures were built, diets improved. Culture was shaped and reshaped in quick waves.

Fast-forward to the mid 1700’s: a new energy paradigm was ushered in by the steam engine, and the communication leap came in the form of the printing press. 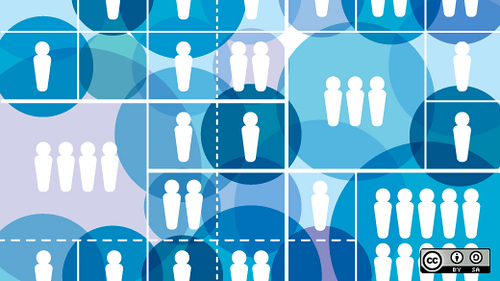 As a result, the first Industrial Revolution took hold, and the locus of human economic endeavor moved to factories, while people and materials were transported more efficiently. Relatively Meanwhile, the printing press made the wide dissemination of diverse ideasa reality. Governments and religions evolved, and were eventually overthrown. The known world was explored and documented.

Step forward another hundred years to the second Industrial Revolution in 1870, and you’ll see another wave of massive change. The discovery and refinement of oil and the invention of the internal combustion engine were the new energy paradigm. The advent of the telegraph opened the era of electronic communications. Once again, in a relatively short period of time these advancements caused massive change. The wide use of oil as a fuel enabled the combustion engine and portable power, and the invention of the telephone , offered real-time communication.

Perhaps more importantly, such innovations have changed expectations for everything from building (LEED certification) to lighting (CFL’s as a global standard, supplanting incandescent light) to cars (hybrids and plug-in electrics).

The communications paradigm is third-generation electronic communications. Smartphones bring us ubiquitous, mobile connectivity to third-generation Web technologies that range from Telepresence services to social networks like Twitter and Facebook. As the Arab Spring demonstrated, the effects are profound. Meanwhile, YouTube allows anyone in the world to broadcast themselves. LinkedIn has made virtual business networks, and their many uses — sales, business development, and recruiting.

But this is all just the tip of the iceberg.

The fabric of society was rewoven during each of these periods of revolution,. In building practice, we’ve gone from mud to stone to steel. We’ve gone from using grain to steam to create energy and drive consumption, and steam to oil. Now we’re focused on renewables as the smart way forward. Transportation has evolved from foot to train, to ship, to the automobile. Now, virtual technologies like Telepresence and Skype supplant physical travel. The model of ownership and job creation has gone from chieftain to king, robber baron, and then executive. Now we have the entrepreneur. 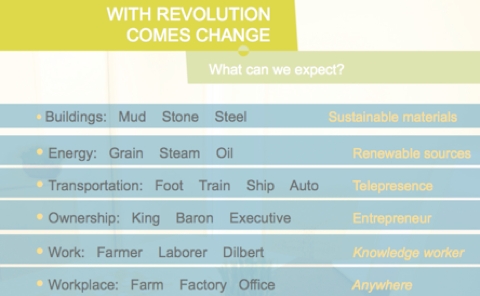 Most important for your purposes, work has changed through these revolutions: farmers, laborers, and eventually, office drones. Today, we’re a nation of knowledge workers.

Accordingly, the workplace has evolved. We used to work on the farm, and eventually we moved to the factory. Then came the office. Today, work is anywhere you are.

Where are the biggest opportunities?

It’s an exciting time, but one in flux.

There will be big winners and big losers. Above all else, real estate is under great duress, and as a result, it’s where some of the best opportunities for innovation in today’s economy present themselves.

Corporations are rethinking their facilities strategies across the board — adapting to new work patterns and cultural norms, and grappling with economic and environmental sustainability mandates. “Space as a service” has emerged as the next-generation model for real estate fueled by an explosion of third places offering space to “work on the go”: coworking spaces, office business centers, hotels, and libraries. The corporate campus has dissolved as a standard.

In parallel, the activity that gets done our workspaces changes at an even faster pace. Knowledge work is moving from individual work to networked work, towards constant collaboration and mobility as a core competency.

What does this all amount to if you’re interested in sharing economies, and the future of work?

It amounts to the fact that the “workplace” industry is transforming. It’s an incredibly hard time to be in the old workplace business — developing buildings and office campuses. On the other hand it’s a wonderful time to be in the business of “Workspace”.

We have more commercial real estate inventory than we will need for the rest of our lives.

There are two drivers behind this sobering fact: Firstly, commercial real estate operated for too long as a supply-driven marketplace, turbocharged by cheap capital and complex financial instruments that created a bubble of value still in the process of venting.

Up until three years ago, supply steadily outgrew demand. Today, over one billion square feet of commercial workspace inventory sits empty. The supply curve actually surpassed the current level of demand twenty years ago, but we kept on building as demand flat-lined.

The second factor at play here is the changing nature of work at a very basic level, from “me” to “we”. This is demonstrated by the dominant trend towards more collaborative and more distributed work. There is a drop in space being allocated to each employee in workspace environments across the board. The norm of 250+ square feet per employee, typical from the ‘70s through the ‘90s, is plummeting to below 100 square feet per employee at many progressive companies. This evolution in the allocation of space serves to add even more inventory to the excess of supply.

The net impact of these two factors is an effective workspace vacancy of over 50% — more space than we will likely absorb in our lifetimes, even factoring in aggressive estimates for population growth.

There is, quite simply, an overabundance of supply in corporate real estate. Why this is the case could fill another post, but in short, it’s because new supply was continually brought online long after the demand curve flattened.

With the emergence of third places and transactional workspaces like coworking spaces and office business centers, we are transitioning to a demand-driven economy. It’s one that will naturally result in the more efficient utilization of assets. 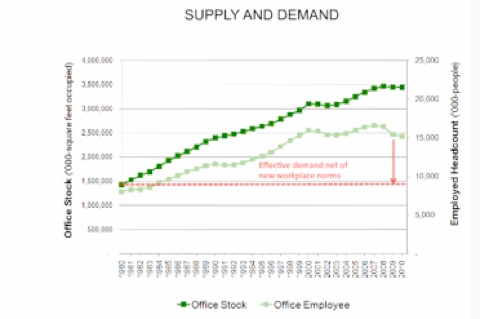 The thing to focus on from here on out is actually pretty obvious to even the casual observer. People are leaving work to get work done.

In some scenarios, we tell employees to leave work to get work done — we give them pink slips, or ask them to work from home.

In other cases, alternative workplace strategies mean that you don’t need a desk any more — instead, workers have access to a wide array of contexts and collaborative spaces that better match their real needs. 82% of Fortune’s “Best Places to Work” have implemented strategies like this, and actively market their innovations as a recruiting tool.

Downsizing has also created an America of freelancers, where project work accomplished by expert contractors rules the day. The “contingent workforce” will double to 40 million people by 2020, representing almost half of all US workers.

Today’s working millennials also have a big hand in this transition — they see flexibility and new work lifestyles as a right, not a privilege. It’s what they expect.

Finally, we leave work to get work done because technology lets us. Laptops, tablets, better battery life, cell phones, Mi-fi cards, easy-to-access public Wi-Fi networks, and online connectivity on planes have made it possible to literally work on the beach. 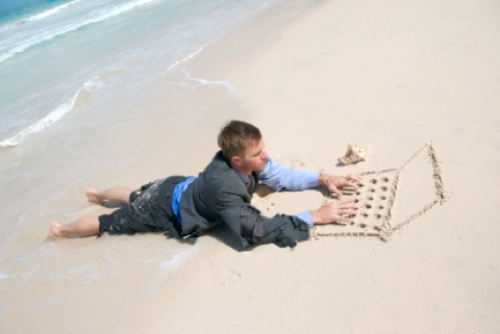 As a result, whether you’re working at an office business center, a plane, a train, an automobile, or even if at home, work is indeed where you are.

Shared and public spaces already got the memo, and are transforming to address this need: the British National Library is effectively the largest coworking venue in the world, with five thousand workers visiting every single day. Meanwhile, hotels have collectively spent $5 billion to remake their lobbies as real workspaces to better entice business travelers.

We are midway through an economic revolution, and everything is changing.

This fourth economic revolution will be distinguished by the proliferation of the Sharing Economy and the harvesting of perishable inventory of all flavors — beds, cars, household tools, and yes, great spaces to work.

At LiquidSpace, we’re focused on the intersection of people and workplace. We see this revolution as “The Great Era of Unbuilding.” We are going to eat into the vast supply of existing buildings, bringing them back to life serving the needs of one billion mobile workers, who make powerful decisions in real-time about how, where and with whom they want to work.

Individuals will thrive given this new freedom of choice, and the planet will smile back at us.

Mark Gilbreath is the co-founder and CEO of LiquidSpace, a marketplace connecting people seeking flexible workspace with venues offering great workspaces to share, in real-time. LiquidSpace has completed

Mark Gilbreath is the co-founder and CEO of LiquidSpace, a marketplace connecting people seeking flexible workspace with venues offering great workspaces to share, in real-time. LiquidSpace has completed more than 50,000 transactions since launching in the SF Bay Area mid last year and is currently connecting mobile workers to over 1,000 great workspaces across the US.

Things I share: my office, my bikes, my experiences