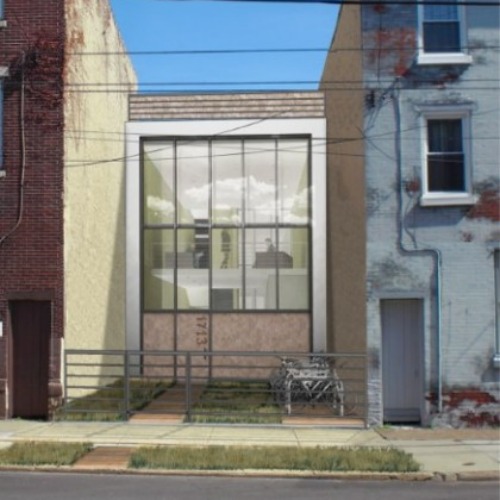 Coworking brings collaboration, sharing, and the power of physical density into the workplace, but what happens when the work's all done for the day?

In partnership with sustainable builder Postgreen Homes, Indy Hall has plans to build a cohousing unit on a currently unused lot on the 1700-block of Howard Street near Front Street in East Kensington (about 2.5 miles from Indy Hall, 15 minutes by bike). The plan for a coworking space to offer cohousing may be a first in the coworking industry.

Inspiration for this ambitious project came when Indy Hall's founders wondered "What if we took all of the things that make Indy Hall awesome and developed something else with them? Something else that addresses the other social pillars besides work – life and play?"

"Our core mission is to 'make Philadelphia a better place to make a living doing what you love', said cofounder Alex Hillman. "There's nothing in that statement that limits us to an office. So rather than just growing vertically by adding more office space, we wanted to first work on growing horizontally, exploring more facets to work but also exploring the other elements of the lives of our members."

Each private living area is self-sufficient – with its own kitchen and living area – but also shares a set of massive common areas – a commercial kitchen with an oversized dining room, a comfortable shared living room, a basement (workshop/classroom), and a roof deck overlooking the Philadelphia skyline. There will also be a couple of small lawns on which food will be grown in community gardens.

The structure's urban environment is one thing that sets it apart from traditional cohousing communities, which are often constructed in more spacious rural or suburban settings.

"Local restaurants, bars, cafes, galleries, and other neighborhood activities become a natural extension of the cohousing experience when its in an urban setting," explained Hillman. "We're very interested to see how that impacts not just the private/semi-private living space, but the surrounding neighborhood as well."

Although the project sprang from a desire to bring the ideas behind coworking to a new audience in a new setting, Indy Hall members aren't the only ones eligible to live in the cohousing community.

Though units will be available for purchase in a condominium-like style, Indy Hall plans to own at least one unit for short-term rentals to accomodate the flow of diverse individuals that visit its coworking space.

Currently, the coalition is seeking those interested in renting, buying, investing and getting involved otherwise. If interested, get connected here.