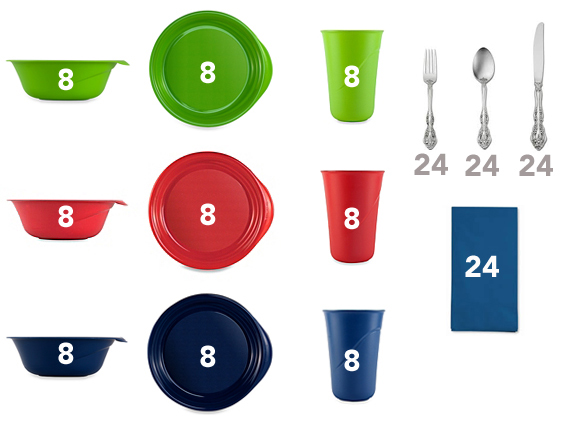 With the holiday season winding down, people are setting out plastic bags filled with used paper plates, napkins, and utensils, for landfill trucks. To reduce such waste, residents of Palo Alto, California have worked with their city officials to create a sharing alternative — the Zero Waste Party Pack.

About two-dozen community members serve as "hosts" for a set of 24 colorful plates, bowls, cups, and other utensils. The dishes are made of sturdy, recycled plastic. Everything is washable, and it all comes in a handy carrying case. The City of Palo Alto has purchased the sets, and hosts loan them out at no cost to neighbors all over town.

People who want to borrow the set email the nearest Party Pack host. If the host's Party Pack is not available, they help the borrower find one that is. The borrower agrees to pick up the set a day or so before the event and to bring everything back, washed and ready for the next user. Hosts keep track of the number of users, along with any loss, and report the data annually to the city.

"It started back in 2009," says Wendy Hediger, Zero Waste Environmental Specialist for the City of Palo Alto. "One of our former city staff, Annette Puskarich, started with a pilot kit in her neighborhood. It worked well, so we expanded the idea to the whole city."

"We had just started our Zero Waste Block Leader program and we wanted to include a re-use program, so it was a great idea for getting people to learn about that," says Hediger, describing the city's community-based approach to educating residents about new methods for recycling. 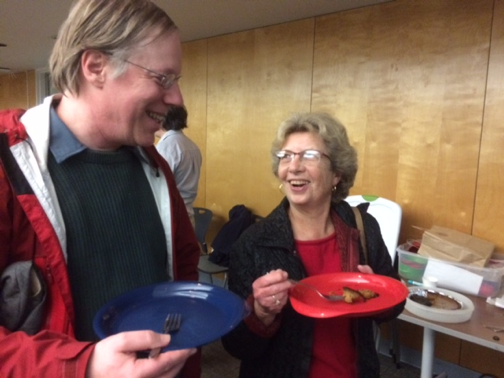 Residents of Palo Alto nosh with the help of a Zero-Waste Party Pack. Photo by Debbie Mytels/Shareable.

"Re-use is really hard," she says. "It's about changing habits, and it’s hard to find big ways to do that. The weight of stuff that this diverts from the landfill isn’t really the point. It’s about education."

The city's Zero Waste program also supports other community projects like a quarterly Repair Café, a Share Fair for garden produce and household items, and a Halloween costume exchange — all of which exemplify the zero waste concept of  "reduce, re-use, and recycle."

A side benefit of the program is that it builds community and keeps social networks connected. One Party Pack host said she received a note via the city from a woman whose daughter had been in her Girl Scouts troop 20 years ago. Although they only lived about four blocks apart, they hadn't seen each other in years, and the block leader said she thought the family had moved away.

From its start as an official city program in 2012 through 2015, the Party Packs have been used 417 times by over 9,000 people. The sets cost less than $300 each, and the city has spent about $8,000, which includes $1,700 to purchase replacement items. Staff time has not been separately accounted for, and Hediger says it is not a large share of her time. The city also pays about $3,700 per year specifically to place ads in the widely read local weekly newspaper. It also utilizes free outreach mechanisms such as Next Door, Facebook, e-newsletter, and emails.

"The biggest problem is having to replace missing items," says Hediger.  "We tend to lose more at bigger parties where three or more sets are being used at once. It works best when borrowers have a chance to describe the purpose of the Party Pack to the guests and show them where to place the items for eventual washing."

To facilitate this, the city has also made 8.5" x 11" laminated signs so party givers can indicate where to place dishware, utensils, and napkins, as well as any compost, recyclables, and landfill items.

Along with the signs, another key to a successful program involves giving the leaders some training and a tip sheet for how to engage borrowers and their guests in how to use the system, Hediger says: "If people don’t learn to collect the things for washing, the loss factor can be a killer for someone that doesn’t have a budget like ours."

"Other than that, the only other issue that's come up is that some borrowers expect the sets to contain really nice chinaware," she says. "But this is plastic picnic ware — if they want fine china, that's available at rental stores."

Hediger's advice for others who want to start a system of sharing party packs: Start with a pilot program first.

"Every community is different,” she says, so consider how your social networks function. Are they built around neighborhoods, schools, or places of worship? How can you tap into that? Also, "be patient," she says. "It started slowly for us, and it keeps growing." It's important to get attention for the program and continue putting it out there. Don't rely on your neighborhood leaders to do that alone. Use the local media and online networks. Send out short promotional messages that your block leaders can re-send to their networks, too.

To make it work effectively in another community — whether the sponsoring organization is a city, a house of worship, a recreation center, or a school — two functions are needed to enable sharing to happen easily. One is a centralized communications hub that sends out regular messages to the community about the program's existence. The hub should also list the contact info for hosts on a centralized website, or the hub should designate a contact person who sends out requests to the hosts. The second function is a geographically distributed materials web, so that the shared kits are easily accessed and returned by people throughout the community. The communications hub should stay connected to the distributed materials web with a biannual face-to-face meeting for feedback and fellowship. Beyond that, this sharing system is simple, low-maintenance and definitely a feel good experience.

Debbie Mytels is an environmental activist who is a Zero Waste Block Leader and Party Pack host in Palo Alto. She works for Acterra, a non-profit environmental education-and-action group and has been

Debbie Mytels is an environmental activist who is a Zero Waste Block Leader and Party Pack host in Palo Alto. She works for Acterra, a non-profit environmental education-and-action group and has been a community-building volunteer for many years.  She is currently serves on the leadership team of Silicon Valley Climate Action Alliance, is on the steering committee of Transition Palo Alto, is an Advisor for the Community Advocates Leadership Academy, volunteers as a hike leader/docent for the Midpeninsula Open Space District, and chairs Peninsula Interfaith Climate Action.