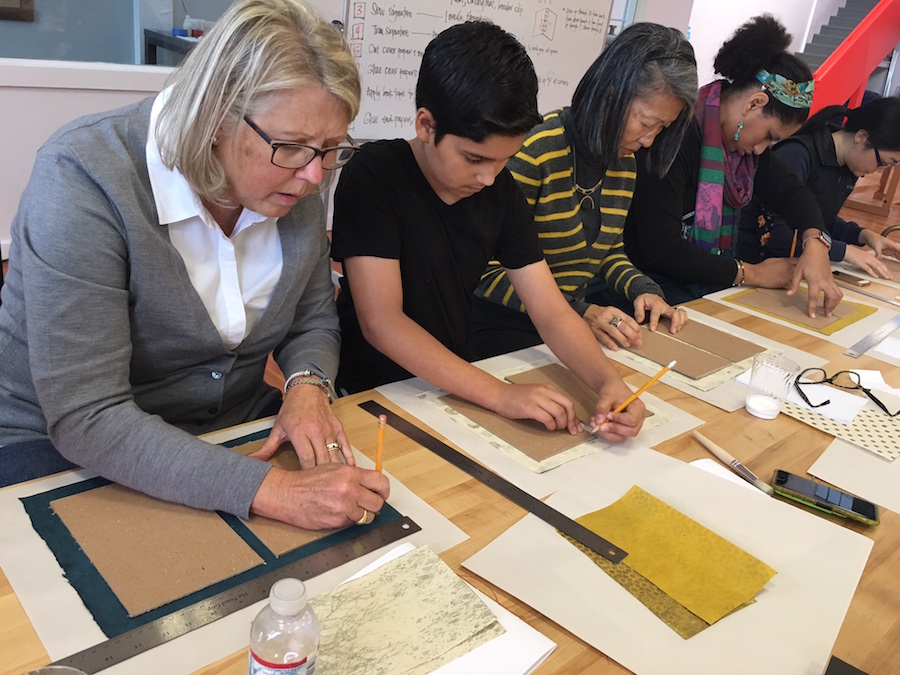 Cat Johnson|April 4, 2017April 22, 2019
In 2008, designer Emily Pilloton created Studio H, a nonprofit based in Berkeley, California, that helps young people design and build items that tackle social problems. As teachers found out about the project — primarily through a documentary about Studio H called "If You Build It," they expressed an interest in learning how to bring Studio H's ethos into their classrooms.
In 2015, a longtime teacher named Christina Jenkins joined Pilloton to help teachers do just that. The two created Unprofessional Development, a program that teaches educators how to bring purposeful design, making, building, and community engagement to their own teaching practice.
We chatted with Jenkins about the vision for the project, the importance of hands-on learning, and how students and teachers can make positive impact on their communities. Here are the highlights of our conversation.
Cat Johnson: How did Unprofessional Development grow out of the work Studio H was already doing?
Christina Jenkins: We began thinking about a creative mindset that we wanted to help teachers cultivate. The way we think about Studio H is not through a series of lesson plans or a curriculum that we can just hand off to somebody. It's a way of approaching the work that is grounded in creativity and design.
We began thinking about all of these things that characterized our work and developed workshops to help teachers develop that creative mindset. We did workshops on collaboration and critique and just getting started, which is really hard as an artist and designer sometimes. 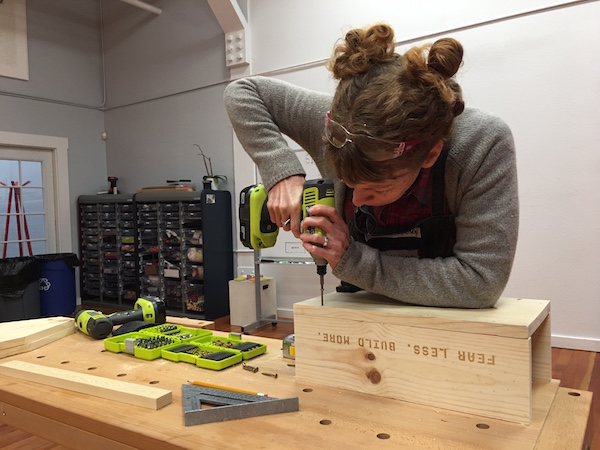 Unprofessional Development inspires an ethos of creativity and collaboration.
What's the big picture vision for the project, which already includes workshops, and field trips, makerspaces?
We were doing one-off workshops out of whatever spaces we could find. Over the past year, we kind of moved away from that model. We opened Girls Garage in the last year and, because we have our own space now, we're able to use it in particular ways. Rather than just doing abstract creativity workshops, we're really interested in helping teachers build stuff. Through the act of building stuff with us at Girls Garage, we want to help them think about what that act means for their own practice. If we help an English teacher build a toolbox with us, how might that help that teacher think about teaching English in a slightly different way.
We felt like the creativity workshops were perhaps too abstract. They were really fun and teachers loved participating in them but we weren't sure if teachers were actually taking anything back to their practice and changing the way they taught. We didn't feel like it was connected enough to pedagogy.
The vision going forward is to emphasize purpose and help teachers identify opportunities to do purposeful work with their kids in their classrooms through hands-on projects. We're not opposed to work that doesn't look like that, but we think we're especially good at helping teachers do that type of work.
Tell me more about the creative classroom and hands-on aspects of Unprofessional Development.
Because Studio H started as an architecture studio, we began thinking about hands-on work in that context, but we acknowledged that teachers are not working in that context. It's about identifying big questions that are specific to the disciplines that teachers teach, and doing work that will invite students to answer those questions physically.
We believe that we learn stuff by doing it and that doing, the verb, is actually making something. It doesn’t necessarily have to be a tangible thing. It can be filmmaking, for example, but it does need to be a thing that exists in real life. 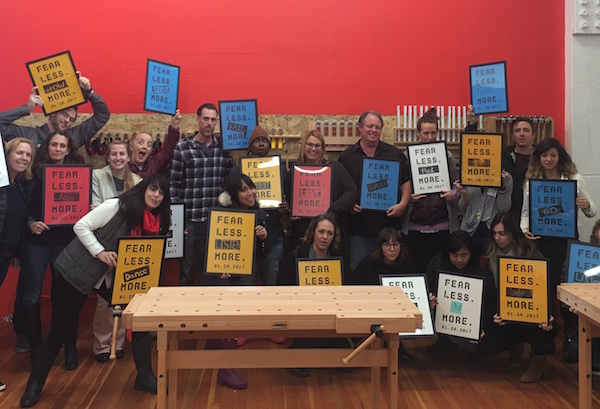 "We believe that we learn stuff by doing it," says Christina Jenkins.

I'm particularly interested in the community projects that come out of Unprofessional Development. Why is that an important piece? Can you give me a few examples of cool community projects students have worked on?
Community, for us, is only one dimension of a purpose. Often, when people think about community projects, they think about doing a canned food drive. We don't necessarily mean that it's community service, mostly just that it has a public purpose in some way.
One example of that is citizen science, which involves anyone doing real, scientific research using low-cost tools and contributing that data to a larger body of knowledge. We believe that's an example of a project with community purpose. If a high school science class goes out and studies the water quality of the creek behind their school and then publishes that data, we believe that has a community purpose.
We're doing a fellowship now with teachers from Sonoma. It's a group led by a guy who teaches fire safety. He taught himself enough about fire safety that his kids could do an inspection for a middle school in their district. It was in collaboration with the fire department, but the kids led the project. They wrote up the report with their findings and it was evaluated by the fire department.
How does collaboration play into Unprofessional Development?
That was a value we identified early in thinking about our work, but we acknowledged that facilitating collaborative work is really hard in the classroom. We don't have the answers to that. We want to put teachers in a position where they are working collaboratively and, while they're in that position, reflect on what that is like and how they might improve that situation for their kids. Oftentimes teachers work alone, then they tell their kids to do group work. It's a weird situation because teachers don't often have the opportunity to work together.
Two examples of that: We do a project inspired by "Project Runway." We give teachers in groups materials and a prompt — design a garment for the end of the world and a constraint — you have to do this in 45 minutes with a pair of scissors and your garment has to be designed out of triangles. With those constraints, the group has to figure out how to work together and how to best complete that challenge. That's one example of how we deliberately set folks up to experiment within those parameters.
The second example we just did a couple of weeks ago was, we gave teachers a set of plans and told them to build a planter box. Within the groups, some had never touched tools before and there were others who taught shop themselves. It was really interesting for teachers to reflect on that experience when they had to self-differentiate and figure out how to make it work given those different skill levels. 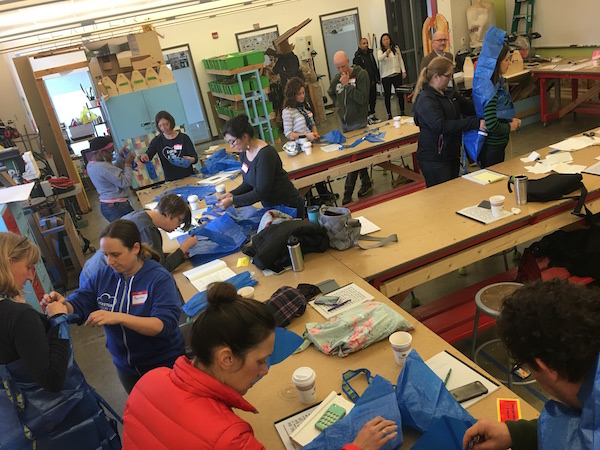 Collaboration is a core part of Unprofessional Development.
What challenges does Unprofessional Development face?
Teaching is so personal, in a lot of ways. By the time I left the classroom I felt like I was teaching in a way that reflected who I was as a human. Hopefully a lot of teachers feel that way, and yet that style of teaching they have developed may or may not be aligned with the vision I have for awesome classroom projects. I'm trying to figure out how to support teachers who believe very strongly in a different pedagogical model that’s not exactly aligned with ours.
What resources does Unprofessional Development offer and what’s the best way for people to learn more and get involved?
We have a whole bunch of free curriculum on the website. The toolbox has about 50 readings and design challenges. Teachers across disciplines and grade levels really appreciate using those. We love hearing from individual teachers and schools who are interested in working with us. We try to make that work at all scales.
All photos courtesy of Unprofessional Development. Follow @CatJohnson on Twitter