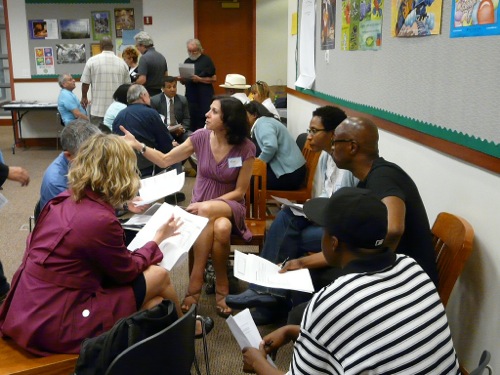 Have you noticed all the cuts being made to your city budget? To schools and libraries, fire fighters and social services, and other public spending? Think you could do a better job managing the budget? Soon, you may have that chance.

Through a process called “participatory budgeting”, residents of over 1,000 cities around the world are deciding how to spend taxpayer dollars. In October, four districts in New York City launched the second such process in the US. This article offers some initial tips for how you could start participatory budgeting in your city.

What is Participatory Budgeting?

In 1989, the Brazilian city of Porto Alegre developed a new model of democratic participation, which has become known internationally as "participatory budgeting" (PB). Through this process, community members directly decide how to spend part of a public budget. In other words, the people who pay taxes (all of us) decide how they get spent.

This sounds simple, but it is not. Budgets are complex creatures, and it takes a lot of time and support for ordinary people to make wise spending decisions. For this reason, PB generally involves a year-long cycle of public meetings. Community members discuss local needs and develop project proposals to meet these needs, then invite the public to vote on which projects get funded. 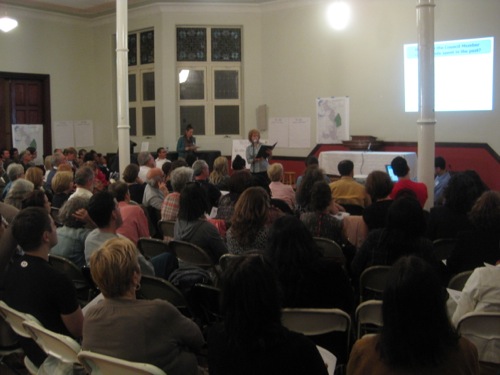 This innovative model has become popular across Latin America, Europe, Africa, and Asia, and the United Nations has named PB a best practice of democratic governance. Cities, counties, states, schools, and housing authorities have used it to give local people control over public spending.

Despite its widespread popularity, PB is new to North America. In 2009, our organization, The Participatory Budgeting Project(The PB Project) helped launch the first process in the US, with $1.3 million in Chicago’s 49th Ward. This Fall, we’re piloting a $6 million initiative in four New York City districts. Discussions are also underway in Providence, New Orleans, Greensboro, San Francisco, and elsewhere.

If you want to bring PB to your community, here are some questions and suggestions to start you off:

Could PB work in my community?

First, check if the right conditions are in place. At the most basic level, you need political will from above and community support from below. You need someone with control over budget money (an elected official, agency head, department director, etc.) to agree to let the public decide how to spend part of the budget. And you need community organizations, in particular those working with marginalized communities, to engage people and push the process forward.

At first, you may not know if you can count on the support of officials or community groups. So ask around. See if there are organizations or decision-makers who might be sympathetic. If so, start organizing.

How do I put PB on the agenda?

To start gathering support, organize a public event about PB to explain how it works, where it has worked, and what benefits it could bring to your community. The PB Project can help provide speakers and materials. Ask organizations and universities to co-sponsor the event, to build up more support and resources. Invite government officials and community leaders to respond to the presentations, to say whether and how they think PB could work locally.

You can also try proposing PB at other community meetings, writing editorials or blog posts, and asking elected officials or candidates to take a stance. Bit by bit, this public outreach can add up and spark local interest.

Who should be at the table for initial discussions? 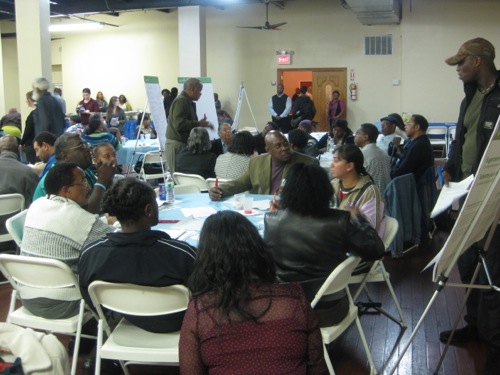 When you begin to introduce the idea of PB to your community, talk with as many interested organizations and parties as possible. This includes government representatives and elected officials, local nonprofits, block clubs, religious institutions, political groups, foundations, universities, schools, and activists. The knowledge and relationships of these groups will determine how far your efforts will go.

How do I pitch PB, to attract interest?

We’ve found that different people get excited about PB for different reasons, but these six angles attract the most interest:

• Democracy: Ordinary people have a real say—and they get to make real political decisions. Politicians build closer relationships with their constituents, and community members develop greater trust in government.

• Transparency: Budgets are policy without the rhetoric—what a government actually does. When community members decide spending through a public vote, there are fewer opportunities for corruption, waste, or backlash.

• Efficiency: Budget decisions are better when they draw on residents’ local knowledge and oversight. Once they are invested in the process, people make sure that money is spent wisely.

• Social Justice: Everyone gets equal access to decision making, which levels the playing field. Traditionally underrepresented groups often participate more than usual in PB, which helps direct resources to communities with the greatest needs.

How do I deal with resistance?

When government officials and other decision makers first hear about PB, they often raise the following doubts:

• That’s the Elected Official’s Job: Voters elect government officials to make the tough decisions, so shouldn’t budgeting be their responsibility?

Sure, they should be responsible. But if they share this responsibility with community members, they can better represent local needs and desires. PB helps officials do their job better, by putting them in closer touch with their constituents, and by injecting local knowledge and volunteer energy into the budget process.

• There’s No Money: Budgets are being cut across the board, so how could there be money to launch PB?

Fortunately, PB does not require a new pot of money, just a change to how existing budget funds are decided. You will need some resources to carry out the PB process, but this investment saves money down the road, as participants discover new ways to make limited budget dollars go farther.

• The Process Will Be Co-Opted: If budget decisions are opened up to the public, won’t the “usual suspects” and powerful community groups dominate?

This is a valid concern for any kind of public participation, and PB is not immune. But if you involve all segments of the community in planning the process, and reduce the barriers to participation for marginalized people, you can prevent any one sector from taking control. Regardless, when people are given real responsibility to make budget decisions, they tend to rise to the occasion, and think about the broader community.

What pot of money will the community allocate?

PB usually starts with “discretionary funds”—money that is not set aside for fixed or essential expenses, and that is instead allocated at the discretion of decision makers. While this is typically a small part of the overall budget, it is a big part of the funds that are available and up for debate each year.

There are many sources of discretionary money. It could come from the capital budget (for physical infrastructure) or operating budget (for programs and services) of your city, county, or state. City councilors or other officials could set aside their individual discretionary funds, as in Chicago and New York. These officials may also have control over special allocations like Community Development Block Grants or Tax Increment Financing (TIF) money. Housing authorities, schools, universities, community centers, and other public institutions could open up their budgets.

The funds could even come from non-governmental sources like foundations, community organizations, or grassroots fundraising, if this money is oriented towards public or community projects. Some PB processes mix funds from different sources, to build up a bigger budget pot.

How much money is enough to do PB?

Almost no pot of money is too small to start. PB has worked with a few thousand dollars and with many millions of dollars. Most processes involve 1-15% of the overall budget. PB usually starts as a pilot project with a small budget. If the process is successful, it can build political will to increase the pot of money.

How much money you need depends on what it will be used for. If students are allocating the money to school activities, a couple thousand dollars will go a long way. If residents are deciding on significant physical improvements for public parks, streets, and buildings, you’ll probably want at least a million dollars. These capital projects typically require more money than programs and services, since they are built to last multiple years.

Regardless, you’ll want funds that are renewable from year to year, so that PB isn’t just a one-year fling. And in the long run, the more money, the more you can do!

What other resources will I need? 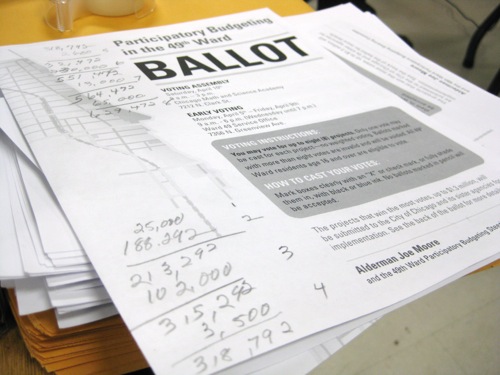 Creating a new experiment in democracy is not easy. It requires months of planning to design a sound process and build community buy-in. Successful PBs draw on the expertise and resources of dozens of organizations and agencies. Bringing all these people to the table is not easy—and getting them to agree on a plan is even harder!

Once your process gets going, you will need an extensive outreach and communications effort. Without the financial and human resources to conduct outreach, print materials, and run scores of public meetings, community participation will be limited. Usually, the elected official, city, or agency pays most of these expenses. Foundations and other funders can also help cover costs—especially at first, when the work is greatest.

Starting PB in your city is a lot of hard work, but if you do it right, the payoff is tremendous. You can make government more transparent, budgeting more efficient, and public spending more fair. You can educate thousands of people on how government works, develop hundreds of grassroots leaders, and build stronger community networks. And in the end, you might even fend off those waves of budget cuts, and replace them with a people’s budget.

Other Shareable articles about Participatory Budgeting:

An Ohio native, Maria Hadden now lives in Chicago’s Rogers Park neighborhood but considers herself a global citizen. She earned her B.A. in International Peace and Conflict Studies from The

An Ohio native, Maria Hadden now lives in Chicago’s Rogers Park neighborhood but considers herself a global citizen. She earned her B.A. in International Peace and Conflict Studies from The Ohio State University and her Master's degree at DePaul University in their School of Public Service. An AmeriCorps*VISTA alum, Maria is also a Mediator and Mediation trainer. She became involved in Participatory Budgeting as a volunteer community representative during the first cycle in Chicago's 49th Ward. She continues to work with PB in the 49th Ward and joined the Participatory Budgeting Project to bring the process to even more locations in the United States and beyond.

Josh Lerner is the Director of The Participatory Budgeting Project. He has completed a PhD in Politics at the New School for Social Research and a Masters in Planning at the University of Toronto. Since 2003, he has researched, advised, and worked with participatory budgeting processes in the US, Canada, Argentina, Brazil, Guatemala, Spain, and the UK. In addition to teaching at Fordham University and The New School, he has worked as a popular educator with the Center for the Urban Environment and as a community development advisor on UNDP projects in Slovakia. He has published in venues such as YES! Magazine, The Christian Science Monitor, The National Civic Review, Shelterforce, and the Journal of Public Budgeting, Accounting and Financial Management.