An Ohio native, Maria Hadden now lives in Chicago’s Rogers Park neighborhood but considers herself a global citizen. She earned her B.A. in International Peace and Conflict Studies from The

An Ohio native, Maria Hadden now lives in Chicago’s Rogers Park neighborhood but considers herself a global citizen. She earned her B.A. in International Peace and Conflict Studies from The Ohio State University and her Master's degree at DePaul University in their School of Public Service. An AmeriCorps*VISTA alum, Maria is also a Mediator and Mediation trainer. She became involved in Participatory Budgeting as a volunteer community representative during the first cycle in Chicago's 49th Ward. She continues to work with PB in the 49th Ward and joined the Participatory Budgeting Project to bring the process to even more locations in the United States and beyond.

Josh Lerner is the Director of The Participatory Budgeting Project. He has completed a PhD in Politics at the New School for Social Research and a Masters in Planning at the University of Toronto. Since 2003, he has researched, advised, and worked with participatory budgeting processes in the US, Canada, Argentina, Brazil, Guatemala, Spain, and the UK. In addition to teaching at Fordham University and The New School, he has worked as a popular educator with the Center for the Urban Environment and as a community development advisor on UNDP projects in Slovakia. He has published in venues such as YES! Magazine, The Christian Science Monitor, The National Civic Review, Shelterforce, and the Journal of Public Budgeting, Accounting and Financial Management. 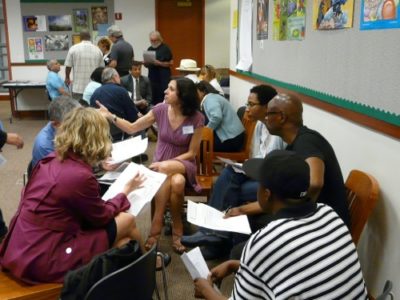