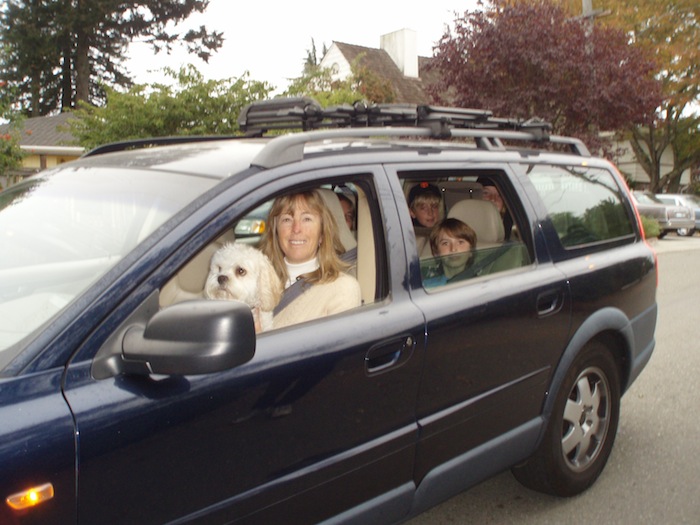 Ever since my husband traded in his Saab sedan for a Toyota Prius in 2005, I’ve been wondering if I should do the same with my Volvo station wagon.

The car is only eight years old with less than 100,000 miles on it, but it gets half the gas mileage of the Prius and is more car than I need for most everyday driving. With global warming and rising gas prices, getting rid of it seems to be the smart and ethical thing to do.

But I’m reluctant to lose the Volvo. Like many families with kids, I appreciate having a car that can haul a lot of gear and provide extra seating when I need it. The car has four-wheel drive, so our family can take winter ski trips to the mountains without carrying chains. If I replace my Volvo with a smaller, fuel-efficient car, I want to find a way to get four-wheel drive or larger cargo space when I need it.

Wouldn’t it be great if I could somehow “have my car and drive it too”?

Enter car sharing. Car sharing involves trading car ownership for having access to a car only when you need it. It is designed for people who need a car infrequently — but it can also work for someone like me, who needs different cars for different occasions.

In Berkeley, California (where I live) City Car Share, a non-profit car-sharing program, has been in operation since 2002 and is one of the first of its kind in the world. For a nominal per use charge, anyone can pick up a car on a moment’s notice and drive it away for an hour or for up to a few days. There is no paperwork, no car insurance, and no costly maintenance.

According to Matt Nichols, principal transportation planner for Berkeley, becoming a member of City CarShare can save you thousands of dollars a year. He should know. He and his wife took the plunge, got rid of their car, and use City CarShare for almost all their driving needs. Their two kids have been raised with carsharing.

“It works great for us,” says Nichols. “It’s easier than you might think.”

There are car share companies like Zipcar and UCarShare that operate in several cities and universities all around the country. If you need a special kind of vehicle for a particular use––say a pickup truck if you’re hauling a load or a BMW is you want to impress your boss––they can often arrange that too. Since you only pay for the car when you use it, it encourages you to pay more attention to the actual costs associated with driving.

When people get in their cars, says Ganson, they don’t think of the hidden costs of driving––like insurance, registration fees, parking costs, and general maintenance fees. But when they pay per use, the cost becomes more apparent, and that helps people think twice before taking off in a car instead of using alternative means of transportation or just staying home. “The more people don’t get in their cars, the less greenhouse gas emissions,” he says.

But there are benefits to car sharing besides reducing pollution. “The number one cause of death for people aged 1-35 in this country is auto collisions,” says Ganson. “When there are fewer cars on the road and less congestion, there are fewer accidents.”

He points to evidence from last summer when the recession hit: people drove less and there were 3-4,000 fewer deaths from auto accidents than expected based on statistics. Car sharing also reduces noise pollution and photo-chemical smog, encourages less road construction, and means less oil and other leaked fluids ending up in our waterways.

Plus parking a car is expensive, though the costs are often hidden. “The amount of public money spent for on-street parking around the country is somewhere between what we spend on Medicare and on the national defense budget,” Ganson says.

His arguments are compelling. But I’m afraid that my life has already been planned with car ownership as part of the equation. I live in the hills above Berkeley, a steep bike ride away from city lots with share cars. My kids’ school is ten miles away and public transportation is spotty at best. It would be impractical to give up car ownership completely.

What else can I do? That’s the question I tackle the next installment of “How to Share a Car.”