How to Create a Pop-Up Library - Shareable
Skip to content 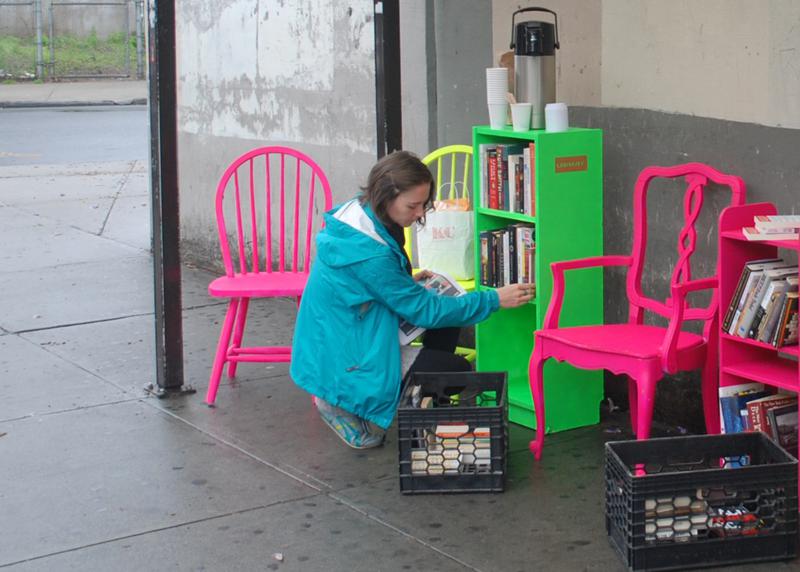 It was a grey and rainy New York day when Adam Wiesehan and Margaret Day brought their pop-up library to life. They had been working to find a way to combine Adam’s architectural training and interest in street art with Margaret’s background as a librarian and her commitment to library activism. Hosting a pop-up library turned out to be a great way to do just that.

A popular trend these days, pop-up libraries are, well, popping up all over in the form of payphone and phone booth libraries, the Book Bike, Little Free Libraries and more. The idea is that by making books freely available we can enhance public spaces, utilize underused resources and encourage reading and self-learning.

Expanding on the idea of simply leaving books for people to take, Adam and Margaret “activated” their space. Through their pop-up library, which included brightly colored shelves and chairs, hot coffee, good conversation and plenty of books, they met their neighbors, turned a busy but drab area into something inspiring, shared resources and contributed to their community.

Now experienced street librarians, Adam and Margaret offer some tips on how to create a low-cost, pop-up library anywhere.

The Books
Adam and Margaret suggest looking on Craigslist for free books, asking public libraries for unused books, putting a sign and a box in coffeeshops, keeping your eyes out for books that have been left on the sidewalk (that seems to be a thing in New York), asking friends and family to contribute books, buying dollar books from a local bookstore and keeping an ear to the ground for unexpected sources. The majority of Adam and Margaret's books were donated by Occupy Wall Street. From their experience, having to gather books is a one-time thing though, as book donation offers started rolling in once people heard about the project.

They suggest having a wide variety of subjects and genres, including plenty of children’s books. Throughout the day, they gave away around 100 books, but their sense was that you could create a library with as few as 30. 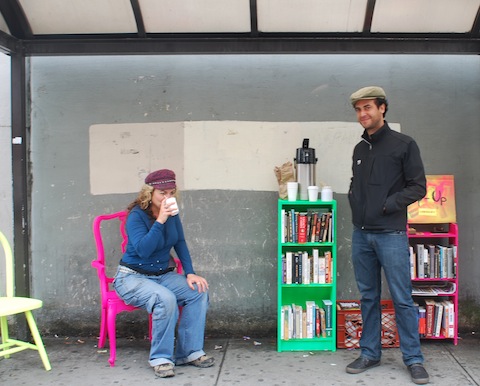 The Furniture
Having brightly-painted furniture and signage called attention to the library and invited people over to see what the cheerfulness was about. “If [the shelves and chairs] weren’t painted, we wouldn’t have gotten nearly as much attention and positivity from people,” says Margaret. “The bright colors really made people feel happy.”

Having a place for people to sit while they were reading and sharing stories made the library a welcome place for people to take a load off and make new neighborhood connections. Adam and Margaret suggest keeping an eye out for discarded furniture, checking thrift stores, checking Craigslist and asking for donations. The furniture they used was all found on the street. With a fresh coat of paint it was good to go. Throughout the day, they tinkered with the arrangement of the furniture, keeping it interesting and fresh.

Coffee
The coffee aspect of the library was an important part of the project. Coffee nooks are natural hubs of activity and conversation. “The coffee was really great,” says Adam. “Nobody came and got a coffee and left. It sparked conversation and that’s really what we wanted, even if they weren’t going to take a book.”

Adam and Margaret suggest asking a local coffee shop to donate the coffee or provide it at a discount. [Note: they were surprised at how many people didn’t drink coffee, so it may help to offer tea as well.] 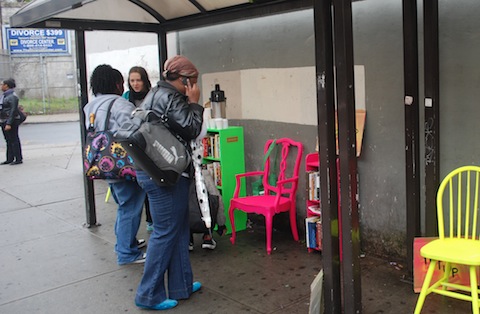 Location
This particular pop-up library was at a bus stop, which Margaret says, was perfect in this situation. “People were waiting around with a little bit of time on their hands, a little bored, anxious to get going. It provided them with an activity.”

Adam and Margaret suggest finding a location that’s active and bustling, but that doesn’t have a lot of cultural activity going on. There are plenty of busy streets but if you choose one that is too active, with people hurrying along to their next appointment, it won’t be effective. Being a transportation hub, their bus stop was a prime spot. It’s a stop for six bus lines and there’s a subway station around the corner.

Planning and Post-Production
Not anticipating how well the library would be received, Adam and Margaret didn’t create an infrastructure for receiving and transporting donations and storing donated books. They suggest having a plan in place, before the library pops up, that addresses these issues. And if you want a website, or to otherwise document the project, set it up ahead of time. Adam and Margaret were so busy talking with people that they weren’t able to get as many photos as they would have liked. Their advice: take a friend whose job is to document. 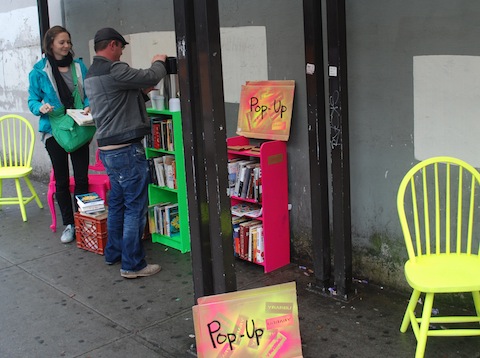 Big Picture
The beauty of pop-up libraries (or pop-up anything, for that matter), is that each one can and presumably will be different. For Adam and Margaret, having graffiti-inspired, brightly-colored furniture was just the thing for this project, but another space may call for something different. “People live in very different types of communities,” says Margaret. “Just by observing the area where they live, people are the best judge of the space. Maybe neon furniture isn’t the best for their location. Maybe something else would work better. Be open and creative,” she adds. “Just think about what people in the neighborhood might be interested it.”

The Wrap
Something that struck Adam and Margaret was the ease of putting this together. They talked about the project off and on for a few months, and then put their plan to extend sharing and friendliness into their community into action. Some people were initially hesitant, wondering what the agenda was, but there was none, other than fun. As Margaret put it, “There was nothing they could be negative about.”

In the end, the project was an activating, community-building project that inspired library visitors as well as its librarians. While Adam and Margaret’s pop-up library was focused on books, they point out that this format could work with tools, musical instruments, clothing, bikes etc.

“Looking back,” says Adam, “it was really an easy thing to do to get on the street and share ideas with people and have people share their ideas with us. That really motivated us to get back out there and see what else we can do with it.”