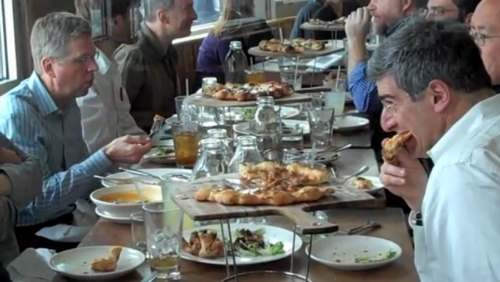 What does it look like to start a values-based business with members of your community? Gather is a sustainable restaurant that serves as a successful model. Located in downtown Berkeley, California and catering to conscious foodies, the farm-to-table eatery keeps thriving with an omnivore-friendly menu and steady reservations. Esquire magazine named it one of the top restaurants of 2010 with Sean Baker its Chef of the Year and The New York Times described it as a “Michael Pollan book come to life.”

When owners and mountaineering guide-friends Eric Fenster and Ari Derfel developed their business plan 10 years ago, they had no formal culinary or business training. It was smart planning, relationship building, and a new way to raise funds that made their vision possible.

Derfel considers himself an “unusual entrepreneur with unusual motivation.” An inspiring public speaker at the recent TEDxPresidio Business 3.0 convergence and a role model in the green movement, Derfel embarked on a year-long project to collect his garbage – mostly food packaging – during 2007 to challenge himself and learn. This gained him media coverage everywhere from The San Francisco Chronicle to CNN and resulted in an art piece at the 2009 Greenfest festival.

Then during a period of 18 months from 2008 and 2009, Derfel explains how he spent countless hours “tirelessly networking” to open Gather in the new David Brower building – a hub for environmental and social action organizations under one roof, built with cutting-edge green design techniques. The goal was to raise $2.5 million, during what he calls “arguably the worst economic climate during our lifetime.” By creating a long term goal to grow their outdoor adventure company, and later their organic catering business Back to Earth, Fenster and Derfel built the credibility to garner investments and open Gather within their 10-year plan. But building the restaurant from scratch  using environmentally-friendly design proved to be very expensive. Though help came from a community bank and a lending institution, relationships with values-driven investors made the difference in the final push.

Over 65 investors and their partners were drawn to the idea of funding the community food system close to home. Derfel describes Gather’s 100+ co-owners as “an incredible mix of people who wanted to build an institution together.” The vast majority live in the vicinity, invested anywhere from $5,000 to $400,000, and will receive 95 percent of the profits until they are paid back. Together Fenster, Derfel, and Chef Sean Baker own 50 percent of the LLC as managing members with decision-making authority, meeting with co-owners once to twice a year.

Today the restaurant serves as one of the first and best examples of Slow Money, a new model of investing in small, local food enterprises that connects investors to projects that revive economies and build healthy communities. Based on author Woody Tasch’s book Inquiries into the Nature of Slow Money: Investing as if Food, Farms, and Fertility Mattered, the movement’s principles hinge on shifting investments from fast profit to those that build relationships, accountability, and a better ecosystem over a longer period of time.

“Fast money made sense when corporations were small and the world was big, when resources and places for waste disposal seemed infinite, when mass production was first being tapped to fuel higher standards of living,” writes Tasch. “We must now find new ways to mark our progress.”

Slow Money’s mission is to create billions of funding for restorative environmental projects, beginning with food. Now a non-profit organization with Derfel as its Executive Director, it has helped funnel over $4 million to small food businesses throughout the U.S., including Gather.

Although Derfel and Fenster had received most of the funding when Derfel presented at the first Slow Money conference in 2009, an additional amount from like-minded investors helped open Gather within the 10-year plan. The money came from folks who not only shared the vision for Gather, but also believed in allowing that money to grow in wealth over time.

This group of evangelists is one of the many “intangible gems” that Derfel refers to as a return on investment in the Gather business venture.

“The beautiful thing is that those people are now the best marketing one could ever hope for, because they constantly tell anyone and everyone to come and eat at this restaurant,” he goes on to say.

Since opening, Gather has created 75 new jobs, helped support several local farms, cultivated a tight knit staff, and started a chain reaction of restaurants opening in the area. The restaurant has its own dedicated half acre of produce grown at Lindencroft Farm, which includes heirloom varieties of produce, chiles and herbs. Its menu appeals to both vegetarians and carnivores. Benches covered in sleek, re-purposed leather belts, a mural in the bar made from reclaimed packaging, and elegant salvaged wood are just some of the features that make it stand out in innovative, environmentally-friendly design.

According to Derfel, “Not only is Slow Money possible, it's happening. Every one of us is an investor, and we all need to begin investing our money like this."

And it’s growing these relationships, rather than just the profit, that Derfel says has made Gather worthwhile.

“What we needed was money, adds Derfel, “what we got was a community.”

Health educator and writer with a background in sustainable food, wellness, and conscious living.

Health educator and writer with a background in sustainable food, wellness, and conscious living.