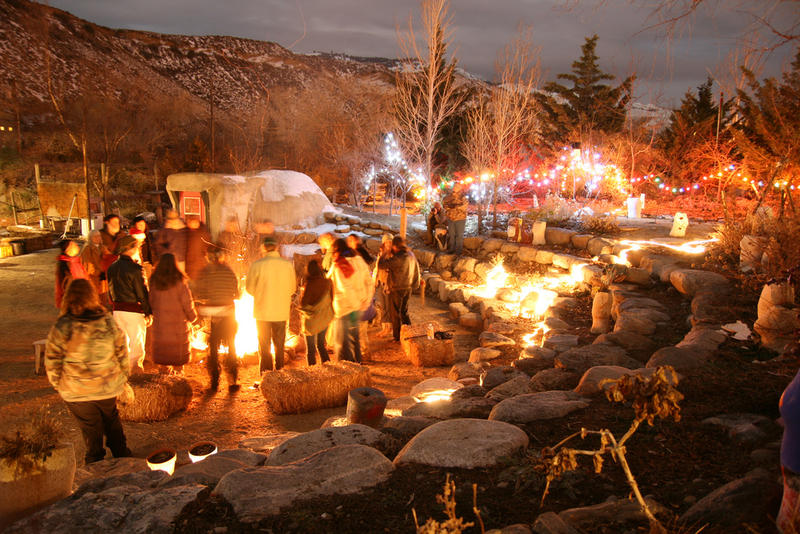 It's a warm October afternoon, and in a bright classroom at River School Farm, a fidgeting group of preschoolers is attempting to grasp the concept of seasons. Outside the classroom walls, autumn rages in a riot of gold and red leaves; in a moment, the children will go outside to discover other signs of fall. Here at River School Farm, those signs are everywhere: not just drifting downward from tree branches, but peeking out of cloches and leafing out in hoophouses. The ducks have moved down to their winter pasture near the river bank, where they paddle and mutter as late afternoon sun sparkles on the surface of the Truckee.

“The Truckee River connects us to each other,” says Tom Stille, founder of River School Farm. In an office-slash-kitchen overlooking the water, we sit around a simple table with Monique Monteverde, River School Farm Director. These two are the core of River School Farm, with the easy rapport of people who love what they do. The kitchen is full with the smell of lunch cooking; beans are steaming in the solar oven. Today, as usual, eight to ten people will gather at the table to share food. It's a normal day at River School Farm, a central hub in Reno's local food scene. I'm here to find out what that scene looks like, and what part River School Farm plays in its past and future. 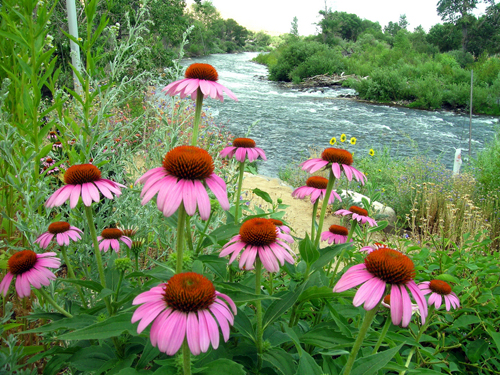 Stille starts with the watershed – after all, without the Truckee River, none of us would be here today. This river is unique, he explains: an inland-flowing current that connects the Sierra Nevadas to Pyramid Lake and thereby the Great Basin desert. “I like to think of Reno as the gateway to the Great Basin,” he explains. The Truckee, Pyramid Lake, Lake Tahoe and Walker River form a protected and fertile foodshed that's nurtured communities for ten thousand years. Recently, local food is bringing people together again – and it's happening at River School Farm.

Growing food in this area isn't easy. The mountains are rocky and cold, the basin windy and dry. Reno gets an average of 7.48 inches of rain each year; during the growing season, it's generally less than half an inch per month (with July's average standing at .18 inches). Summer months are hot, with highs in the 90s and above, but winter temperatures often hover just under freezing for days or weeks at a time. And throughout the spring and summer, the Washoe Zephyr gusts through town at up to 60 miles per hour, kicking up clouds of dust and dessicating tender plants.

Still, agriculture is far from impossible. Skies here are blue and sunny 300 days of the year, and the Truckee River deposits a steady supply of rich soil along the valley floor – along with enough water for sustainable irrigation. Inside protective greenhouses, plants can survive and thrive year-round. The main challenge lies in educating the community, many of whom don't see this as a fertile landscape, in the area's unique potential. Tom Stille has been leading the charge for decades. 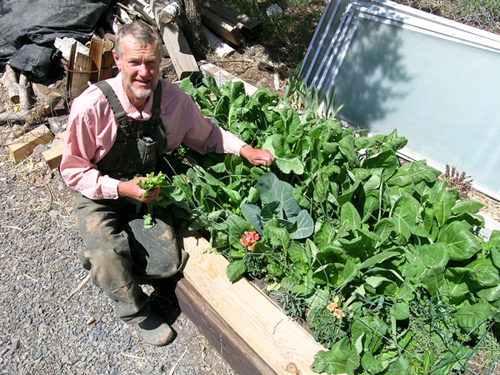 When Stille came to Reno in 1967 as Parks Superintendent, xeriscaping was an unfamiliar concept. He became a board member of the National Xeriscape Council, and was instrumental in bringing water-saving native gardening techniques to northern Nevada. “Since then,” he says, “we've always been trying to build gardens with less water.”

Stille went into business for himself as a landscape architect, and continued to seek out new ideas in sustainable living and holistic lifestyle. A lover of dance, he was inspired by the power of food and dance to bring people together. “In those days, we didn't have a Conscious Dance here,” he says, referring to the barefoot, judgment-free dance movement beloved by Californian bohemians. Stille took it upon himself to create new opportunities for people to gather and celebrate. Over time, that mission led to the opening of River School Farm in 2005. Its purpose: to provide an educational and cultural center for sustainable living, creative expression and bioregional design.

In a city like Reno, where cattle ranchers rub elbows uncomfortably with ski bums and desert rats, the success of such a project is a matter of careful planning and impeccable timing. Historically, food production has often taken a back seat to growth, with much of the “Truckee Meadows” agricultural zone now filled in with commercial and industrial properties. Most restaurant fare is trucked in from California. But increasingly, attitudes are changing and the community is seeking out local, fresh food.

The area's first cooperative grocery store has opened its first permanent location and created a new regional distribution center. A wave of new restaurants – steadily replacing the all-you-can-eat steakhouses – now advertise their local and organic fare. And in 2011, when the University of Nevada considered shutting down its student-run slaughterhouse for local grass-fed beef, public outcry stopped the decision in its tracks. 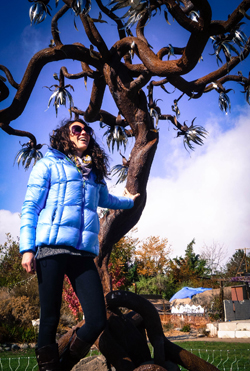 In this changing climate, River School Farm's experimental outlook found an active community of supporters. Monique Monteverde was one of them. “There's something about this place,” she says. Having left the area to earn her masters degree and live in Europe, she found herself drawn back to Reno-Tahoe and to River School Farm. Reconnecting with Stille, she created her own part-time job running events, classes and outreach. She joins two full-time farm managers, a full time office manager and two interns, all of whom work tirelessly on a wide variety of collaborative endeavors.

The property itself is relatively small, about 2 acres of riverside land, .5 acre of which is farmed intensively and year-round under Reno's sunny skies. This isn't the extent of River School Farm, though; there's another plot at the nearby Patagonia service center, and its biggest farm plot is a few thousand square feet at the urban campus of Hug High School. There, students help grow food for their classes, while farm employees turn out produce for River School Farm’s CSA.

In practice, the farm's collaborative projects expand its influence far beyond its physical borders. The projects are too numerous to name. Big ones include a year-round garden in downtown West Street; ongoing outreach and activism as part of the Local Food Network; and shared programs with local educators. Today's class of preschoolers is led by Urban Roots Garden Classrooms, and oriented toward homeschooled children. Workshops continue throughout the winter, as do CSA pickups.

These collaborations aren't just signs of River School's success, but its foundation. Vibrant and growing though it may be, “our market isn't that big,” Stille says. Reno's food culture is growing, but demand is still limited. For independent projects to succeed, competition isn't an option. Everybody's got to pull together and, out of necessity and shared passion, they do it with style. 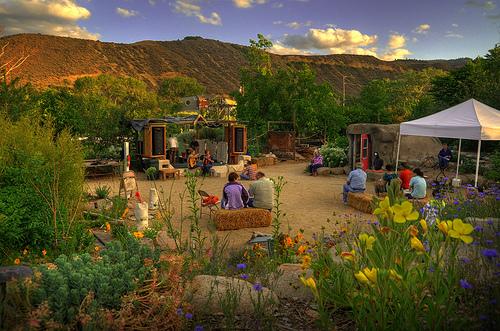 Here, those who eat together also party together. Stille's love of dance leads to endless opportunities for community. Daily yoga classes, midnight moonlight dances, Conscious Dance gatherings, African drumming sessions, kids' music classes, shows and even weddings bring in new faces every day. When guests arrive, they may find more than they expected in the artfully-designed property. Mixed in with the outdoor stage and sculpture-ringed lawn overlooking the river, there are chicken coops and goat pens; hoophouses and garden beds; and a towering strawbale/earth plaster lodge topped with solar water heating panels. It would be impossible to visit this spot and not pick up a little inspiration. That's the idea, and it works. 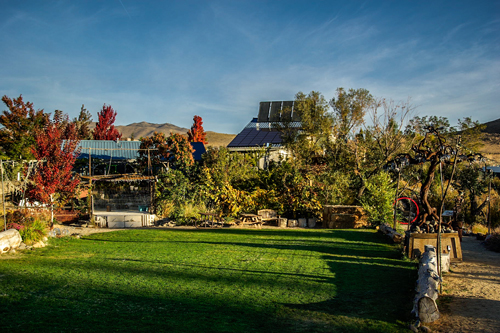 Ask any local foodie about Reno's culinary future, and they'll likely touch on the same central concept: The foodshed and the waterways that define it. Increasingly, this community is learning to support itself with local resources – and as in so many places, food is leading the way. “Food systems bring communities together,” Stille says. But creating a bountiful, sustainable life here is ultimately about much more. “It comes down to loving yourself and loving your community,” he says. Through education, collaboration, elbow grease and plenty of footloose nights, River School Farm is spreading local love in a whole new way.