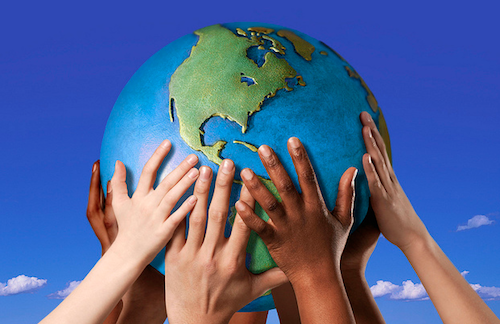 These aren’t mere political slogans. These are statements which define, respectively, the essence of the Wikipartido (Mexico), Partido de la Red (Argentina), Rede Sustentabilidade (Brasil) and Partido X (Spain). All four first appeared in recent months. And together they seem to pose a question to representative democracy: If the Net is changing every aspect of society, how is it that democracy remains based on 19th century form and technology?

These four parties didn’t come out of nowhere. In fact, they evolved from other parties, such as the Spanish Wikipartido, Sweden´s Demoex, Equo, the Pirate Party, Lista Partecipata from Italy or the Partido de InterNet. These parties, despite their differences, already shared some points in common. A big one: technology isn’t just a set of tools for spreading ideas. Technology is the new process that changes the way we work, make decisions, and communicate. For example, Equo open-sourced their program for the Spanish General Elections of November 20, 2011. Meanwhile, The Pirate Party uses a participatory, interactive program called Liquid Feedback, where each voter can cast their vote through a web of trust. Special mention goes to the Spanish Wikipartido, which, long before the birth of the 15M movement, was experimenting with building collective proposals. Using the motto “Collective Intelligence: Better Decisions,” Wikipartido proudly states in their wiki platform that “every citizen has the right to propose legislature”.

What do Net parties bring to the political scene, and what differentiates those described above? First of all, unlike Equo for example, they aren’t led by familiar faces. The Wikipartido in México clearly states that ”Any attempt to generate a new political option will undoubtedly fail if built around a personality.” Partido X goes even further. It defies persistent political self-promotion by continuing (despite criticism) to protect its members identities. The Argentinian Partido de la Red explicitly criticises the “personalismo” (self-promotion) of current politics in their highly recommended Web Manifesto, which states that: “#StuckDemocracy is a bargain-basement supermarket forcing the debate and election of prominent figures, as opposed to ideas”. One notable exception would be the Brazilian Rede Sustentabilidades, centered on the charisma of the popular Marina Silva, a fact which could be explained by the anthropology of the country´s affections.

Regardless, the biggest difference between the new Net parties and the old is something else: their open program. Both the Pirate Party and Partido de Internet have very specific objectives regarding Internet freedom, free licenses and participatory democracy. And Equo doesn’t try to hide its green face. The Candidatura d´Unitat Popular (CUP) – a Net-born Catalonian Party – defines itself as “Anticapitalist, Separatist Left.” Despite this, Net parties are, above all, open processes. They are also, by choice, unfinished mechanisms. The aim is to create platforms, protocols and tools that can employed by others. Anyone can use the mechanism, regardless of the content created with it.

The Partido de Red defines itself as “a #HumanWeb without a center, sharing knowledge, experiences and wisdom.” The Wikipartido of Mexico, in the word of its founder, Alfonso Tamés, “wants to work just like Wikipedia”. And Partido X, rather than develop a full program, insists on the construction of a basic infrastructure of platforms and tools to activate the collective intelligence. Their Democracy. Period – the only item in their program – is precisely that, a process. Social software, a space for dialogue. The party-as-software equation is one of the defining features of the new bottom-up dynamic being fostered by the Argentinian Partido de la Red: “#PartidodelaRed” uses Software for the construction of collective thought and the promotion of new interactions between citizens and policy.”

Another common thread is the perceived lack of ideology of the new Net parties. Traditionally, being “neither left nor right” was taken to mean being a centrist. Or anarchist, ultra right wing or apolitical. Within the new logic of the Internet, it can mean something quite different. In complex networked systems, 2 + 2, as the theorist Kevin Kelly likes to remind us, almost never equals 4. Asking an old question to try and explain something new just won’t work. For example, do transparency, participation and network horizontality have more to do with the political left than the right? Santiago Siri, expert on social networks and member of Partido de la Red, drops a few clues in a recent essay: “Never before have we been the objects of one another´s attention as much as we are now, in our routine online experience…and that is neither good nor bad, it’s simply new.”

What about traditional parties. Aren’t they trying to incorporate Net dynamics, open processes and interactivity? Antonio Guitíérrez Rubi, in his essay, The Political Party as a Social Co-Working Space complains that “the day-to-day workings of political parties are becoming less and less attractive, stimulating and creative for many citizens.” Additionally, Joan Subirats, director of the Institute of Government and Public Policy (Instituto de Gobierno y Políticas Públicas or “IGOP” in Spanish) states that certain parties, such as UPyD or Ciutadans de Catalunya, “are trying to play at New Politics.” They claim to be neither left- nor right-leaning. Instead, their operations and ideologies contradict much of the essence of what would be considered a Net party.

In fact, traditional parties aren’t even seeing themselves reflected in the mirror of the web. They don’t understand non-hierarchical leadership. The meritocracies that emerge in free-software and networked systems are unknown to them. One sentence from the Web Manifesto sums up the abyss separating traditional political parties from the Internet’s aggregate logic: “#Pairs are plural: not governed by adversarial logic, they seek synthesis, rather than displace the other”.

It´s possible that Net parties may never govern a country. But it’s also very possible that, before long, they may change the rules of the political game forever.

Originally in Spanish. Translation by Stacco Troncoso & AM Utronco/Guerrilla Translations.