How Do Things Ever Change? - Shareable
Skip to content 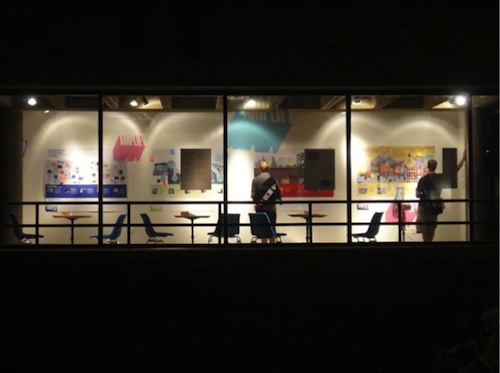 How do things ever change? Let’s say that there are two ends of spectrum:

Today, change of either sort looks more and more difficult. People with corporate power do not want change, and people with democratically elected power seem unable to agree on what rules to make. Everyday life, hemmed in on the one side by concreted infrastructures transporting their food and energy, and on the other side by global media broadcasting a more or less uniform messages, seems very static these days, without the capacity to evolve in new directions.

Reacting to this inertia, many progressives are now developing and sharing alternative strategies for change:

), building consensus on to-be-taken actions (e.g., Transition Town Handbook), and then implementing change (e.g., The Answer to How Is Yes

). Organizing in this way remains on the intentional side of social change. But, because these strategies are not about ruling but agreeing (which is part of their effectiveness – the changes stick), their scale remains small, or at least, they can only be done one community at a time.

There is another way in which societies change: by design…

Ironically, design-based change is often not fully intentional. Somebody, or some company, innovates something; people take up that newly designed product; as a result people develop new habits and expectations around what that product does. The innovators of ‘breakthrough’ products rarely anticipate accurately the social impact of their products. Henry Ford did not anticipate car-dependent suburbs, just as the military who developed the net did not anticipate everything on ‘shareable.net.’

For many years, design researchers around the world, now forming a research network called DESIS (DEsign for Social Innovation and Sustainability), have been interrogating the way in which design could facilitate social change toward more sustainable ways of living. This has involved a different way of thinking about design.

Often designing is characterized as the creative ideas of inspired individuals. For DESIS, the job of designer is more about finding good ideas that already exist in this or that community, and then redesigning them so that those ideas are more robust and more easily replicated by more people. New ideas about how to resource everyday life more sustainably come from self-organizing communities rather than the designer him or herself. But once developed, the job of the designer is to enable more people in those communities to take up those innovations in more effective and more permanent ways, and to enable people outside those communities to take up those innovations more quickly.

DESIS style research has been conducted on nearly every continent except North America – until now. On August 5th, the DESIS Lab at Parsons The New School for Design opened an exhibition in the Lower East Side of New York City, at the Abrons Arts Center. This exhibition is part of a project entitled ‘Amplifying Creative Communities’ funded by the Rockefeller Foundation’s 2009 NYC Cultural Innovation Fund. It is not an exhibition of results, but part of the research process; it is a way of finding less visible examples of ‘creative communities’ that design researchers can then try to ‘amplify.’ The exhibition has lots of channels for visitors to contribute sustainable social innovations they know about or would like. 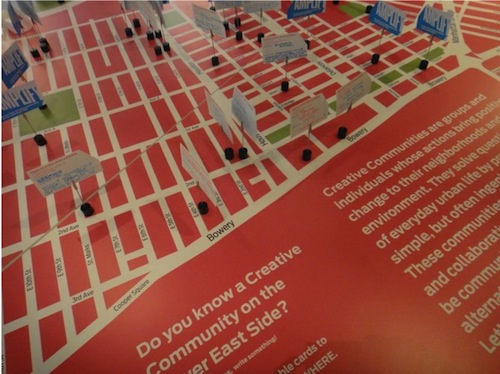 The exhibition has three main parts. The first consists of examples of ‘creative communities’ around the world. These are cases of people getting together to share: food sourcing and production; facilities, devices and expertise; child and elderly care; etc. The cases are drawn from a series of research projects that you can explore here.

The second is the most visible examples of ‘creative communities’ in the Lower East Side (apart from the work of religious and ethnic organizations) – the 40+ community gardens.

The third is preliminary research by Parsons students who talked to residents about community innovations they know about or feel the need for. The students (under guidance of the project’s lead faculty, Lara Penin and Eduardo Staszowski) developed design propositions for amplifying existing initiatives in the areas of:

‘Amplifying Creative Communities’ is a research project with lots of questions about the potential and limits of design-based social change, particularly in relation to the special conditions afforded by a cosmopolitan place with a long history of urban activism like New York City.

A first issue is, how to find good ideas? The premise of the project is that there are good ideas for new ways of living more sustainably out there, in apartments, blocks, parks, community centers and even local businesses. However, these good ideas are often hidden. They might be concealed by being part of an ethnic group, or part of community formed around other non-sustainability focused interests – a support group or fan club or class through which people get to know each other and start to help each other with transport or accommodation or sharing equipment.

Good ideas might just be too small to notice. One of the project partners is Green Map System, which does an amazing job locating ‘green organizations.’ But informal groups that do not have premises or a registered organizational structure tend to be too fine-grain for the mappers to include.

It could also be that those good ideas need to be concealed because they are not officially legal. A recent New York Times article pointed out that people home-baking goods for sale at markets as a recession-coping strategy are illegal until they’ve had their kitchens certified by the Department of Health. Designers could help meal sharing initiatives ‘get up to code’ but only if they can find those innovators in the first place – or if those innovators will risk letting themselves be found.

The second issue concerns the role of design in scaling up innovations. Good design makes things easier, and more effective and/or enjoyable. This is how designs enable new habits. Another premise of DESIS is that there are people who could take up sustainable social innovations but who cannot or do not want to organize into a community that commits to implementing consensual change. In other words, there are many people who will take up sustainable social innovations, like sharing, if they are a bit easier – if they can be done without as much need to community organize. But can, and should, ideas be designed out of their originating communities?

Without that cultural context, and that level of community organizing, perhaps the social innovation is weakened if political forces move against it (in the week the exhibition opened, the Mayor’s Office had a hearing about the imminent lapsing of the ten year moratorium on the destruction of NYC community gardens by developers). Or, if made visible and loud to people outside their communities by design, perhaps social innovations are also easier to marketize, putting them at risk of being commodified by corporations.

At a DESIS workshop held as part of the exhibition, Ezio Manzini pointed out that design has always been the challenge of increasing the quantity of an innovation while losing as little of the original quality of that innovation as possible. So the answer to the question, how much design?, depends on how well the designing is done. IDEO have been involved in the project, helping test different ways of designing in response to the creative community initiatives that are found. It also depends on what exactly is designed. This Lower East Side first phase of the Amplifying Creative Communities project will end with the production of toolkits.

These could be boxes filled with all you need to start a barter-based home restaurant in your apartment building, based on a case found amongst Puerto Rican residents of a block in the Lower East Side. But the toolkits could also be less specific, designed for existing formal community organizations to find sustainable social innovations that they could care for; or they could be toolkits for setting up your own creative community to do its own social innovating.

In this way, DESIS is asking, like shareable.net, how best to share the ways in which people are increasingly sharing; how to amplify the work of those who are taking designed social change into their own hands.

Chair of Business Design, Parsons The New School for Design - currently running a lecture course on 'Not-Owning: Designing (in) Systems of Shared Use.'

Chair of Business Design, Parsons The New School for Design - currently running a lecture course on 'Not-Owning: Designing (in) Systems of Shared Use.'