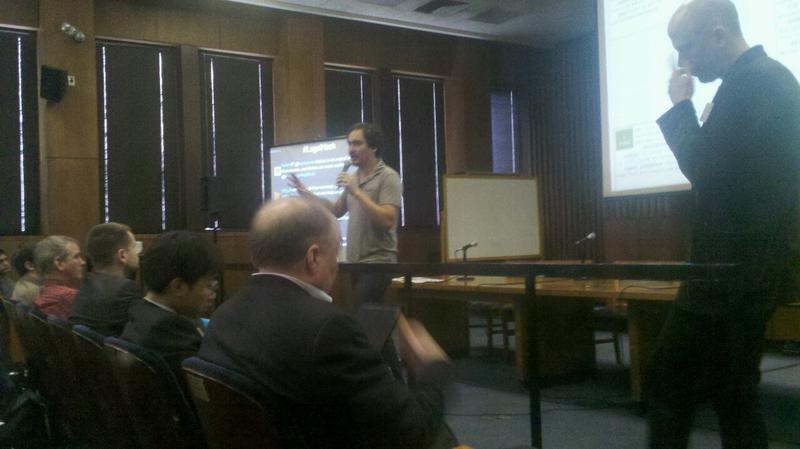 On Sunday, April 15, Brooklyn Law School’s Incubator and Policy Clinic (BLIP) hosted its first “Legal Hackathon.” Describing lawyers as “traditionally conservative wallflowers and naysayers,” Jonathan Askin, the founder of the BLIP Clinic, urged the crowd of lawyers, law students, coders, and entrepreneurs to join a “common mission to apply the law to pave the way for technological, civic, social, and cultural progress.”

The Legal Hackathon was conceived as a way to get lawyers and law students to work collaboratively with coders, policymakers, and entrepreneurs to develop creative ways for lawyers to use new technology and for coders to interact with the law. At the BLIP Clinic and elsewhere (even, tellingly, that Saturday at New York School of Law), law students and newly minted lawyers are engaging with technology, and with hacker culture, in exciting ways.

The event was a fascinating, occasionally contradictory collision of radical politics, technological creativity, legal doctrine, and business acumen. Two introductory keynotes set the tone for the discussion. One, from New York Tech MeetUp chairman Andrew Rasiej, urged participants to push for increased technology use in government and legal work. The goal, he explained, is to move “from e-gov to we-gov,” to use interactive technology not as a government platform, but a “citizen platform.” Rasiej complained that when he ran for New York City Public Advocate on an “city-wide open wifi access” platform, he had to explain the concept of wifi to other policy makers and the press. Open source platforms, he hopes, for citizen participation in governance will increase public interaction with local government, enabling greater transparency and participation – turning “e-gov” into “we-gov.”

The second keynote came from Tim Wu, senior advisor for consumer protection at the Federal Trade Commission and professor at Columbia Law School. Wu’s keynote struck a very different chord than Rasiej’s, emphasizing the historic tension between technological innovation and the law. Most of the inventions that made the information environment what it is today, Wu said, “have two things in common: they’re all hacks, and most of them involved breaking the law somehow.” Wu’s talk emphasized the ethos of hacking, an approach to work that values play, creative problem-solving, and collaborative processes. When asked how the law can keep up with technology, Wu questioned the premise: “Is it actually our aspiration for law to keep pace with technology?” We do not want the law to react quickly, Wu argued, because it represents the slow codification of what we have to say about the authorized use of force. Ultimately, the law should protect a space for innovation, a space that would otherwise shrink and be hampered by private power, Wu said.

Then, with these two keynotes ringing in their ears, the participants split into small groups for afternoon seminars, “taking off the training wheels,” in Askin’s words. The seminars ranged from attempts to develop a way of crowdsourcing mayoral candidacies in New York City to “Hacking a Model Privacy Policy for ISPs.” The afternoon seminars were geared to the development of working models for new, technologically sophisticated solutions to legal problems.

There was an unspoken current of radical politics underneath the stated goals of the Legal Hackathon; Askin, a longtime member of the National Lawyers Guild, referred more than once to the increasing need for active, tech-savvy public interest lawyers. And Wu invoked one of hacker culture’s most radical elements in his keynote: “Nothing clouds the creative mind,” he said pointedly, “like the prospect of huge piles of cash.” History’s greatest innovators have been rebels, radicals, and often outlaws, he reminded the crowd.

The BLIP Clinic’s followup reflections sum up the tone of the event: “Fortunately,” wrote Phil Weiss, a student in the Clinic, “our little event was met with great reviews and awesome coverage. Unfortunately, the first legal hackathon only scratched the surface.” The event organizers seemed to expect more “hacking,” without ever stopping to discuss what “legal hacking” might look like – but Weiss hit the nail on the head in his final assessment.

The Legal Hackathon was “an introduction to an ethos, a method to improve existing legal regimes in innovative ways.” As such, the Hackathon illustrates a growing trend among law students and new lawyers. We are committed to the practice of law, but find the dominant ethos of law practice unsatisfactory. At best, it doesn’t convey our reasons for studying the law; at worst, it represents everything we oppose: the perpetuation of lawyers as “conservative wallflowers and naysayers.” In Jonathan Askin’s words: “We are ‘yeah, but’ lawyers in a ‘why not?” world.” This might be how the legal establishment sees it, but the BLIP Clinic’s Hackathon made one thing very clear: there are plenty of lawyers and policy makers who stand ready and able to participate in that “why not?” world.

Lea Rosen is in her final year at Rutgers Law School. Her work centers on privacy rights in the digital age.

Lea Rosen is in her final year at Rutgers Law School. Her work centers on privacy rights in the digital age.