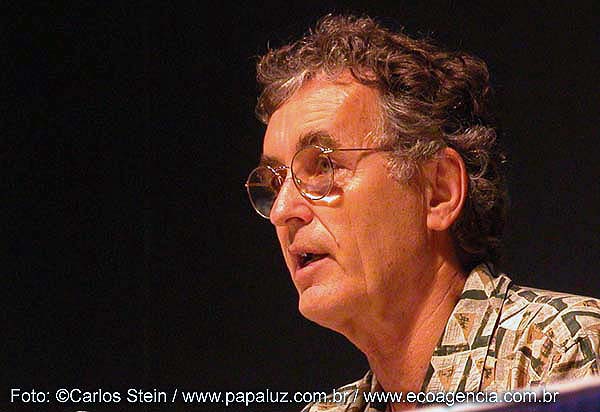 “Nature nurtures life through communities,” said physicist and bestselling author Fritjof Capra. “This is a process that started with the first single-celled organisms.”

“Because of the close connection between sustainability and community,” said Capra, “the basic principles of ecology can also be understood as principles of community.”

Capra (cofounder of the Center for EcoLiteracy, which sponsored the talk) has a formidable, inexorable way of presenting his arguments, which can obscure the leaps and assumptions embedded in them. I had a hard time, for example, imagining how the energy driving community “flows from the sun” — but most of the rest of Capra’s parallel between ecology and community makes intuitive sense to me.

These are, of course, fundamentally countercultural notions; elsewhere in America (i.e., outside of Marin County), we tend to see tooth-and-claw competition as the basis of evolution and success. Nature-as-bloodbath sounds tough-minded, but it’s not the worldview embraced by most scientists who study evolution.

Today, I had a chance to interview University of Washington oceanographer Danny Grunbaum, who has spent years trying to understand (among other things) how ocean life cooperates in order to survive. Our conversation brought to mind Capra’s talk–and echoed many of his points.

“The role of unbridled violence in evolution is greatly overestimated,” he told me. “When we see animals like elephant seals fighting with each other—as we do in lots of nature documentaries—we’re really seeing only a very small sliver of time. Much more of the time they’re accommodating each other and respecting where the boundaries are—and that’s cooperation. There is a tremendous amount of cooperation in nature.”

Grunbaum describes evolutionary processes as mechanically relentless, “a collection of natural processes and mechanisms through which some genotypes do better than others.” I suspect he might say that Capra presents an overly rosy view of evolutionary processes—is it too easy to point out that the scientist Fritjof and the film director Frank share the same last name?—but cooperation still plays a critical role in Grunbaum’s vision of natural selection.

Or as Capra put it yesterday, “In a human organization, new forms of order, organized around new meaning, emerge out of chaotic states. The new order was not designed by any individual but emerged as a result of the organization’s collective creativity.” He continued:

Designed structures are the formal structures of the organization—they provide stability. Emergent structures, on the other hand, are created by the organization’s informal networks and communities of practice, and they can be disruptive. The challenge is to find the right balance between the creativity of emergence and the stability of design.

This ecological understanding of human community, argued Capra, calls for "a form of leadership that creates conditions instead of giving directions, that facilitates the emergence of creativity and novelty. It also means holding the space for the community as a whole to create something new."

This goes right to the heart of what we’re trying to do at Shareable.net; as our project matures, I’m going to remember Capra’s four principles of ecological–and intrinsically shareable–leadership:

Of course, cautioned Capra, not everything that emerges from the structure will survive. The important thing, he said, is to experiment, to explore, to make mistakes, to learn from them, to share what we discover. Words to live by.