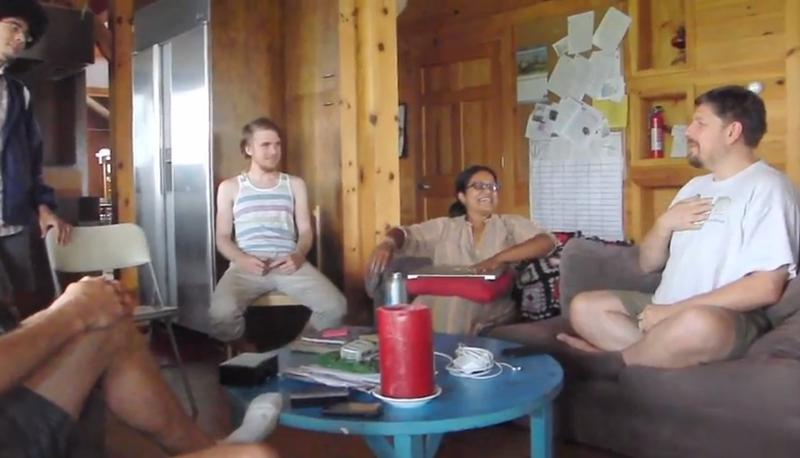 I’ve been priveleged to take part this month in a “rapid prototyping” startup cycle of the Emerging Leader Labs peer learning and project acceleration program that is taking root in a decommissioned paper mill in the upper Hudson Valley of New York State. It’s a dramatic, inspiring, and surreal backdrop for intensive “culture hacking” exploits which seek to infuse this rugged industrial relic with a new organic enterprise cluster and training ground to reinvigorate declining economy, ecology, and communities here locally and via roots and shoots outward in many directions.

There is so much that is new and exciting about how this thing runs, it’s hard to sum up–is it a hacker/maker-space? Is it a coworking station? Is it a social enterprise incubator? A peer-learning academy? Is it a gift-economy think/do tank? It’s a little of each of these, and it’s been designed to emerge in open collaboration. Right now, to me, it feels, well, RIGHT!– and in a few short weeks it’s become almost second nature to live and work outside of the monetary economy, amongst variously splendid equals, co-creating something wonderful, productive, and contagious.

The origins of the program are storied in brief here, and you can also view the five minute concept talk which co-initiator Arthur Brock gave in 2010 when the idea was at its seed stage. Truly, an idea whose time has now come! There is a lot of fantastic volunteer talent and energy that came together rather quickly behind the program, including a standout team of advisors and coaches from vanguard initiatives such as Metacurrency and Thrivable. The spirit of collaboration is deep in the DNA, and an open source ethos guides every play for shared benefit.

There’s much to anticipate throughout the remainder of this Seed Project “alpha” run! Progress and outcomes are being tracked on the website, in a flexible structure around the unique Wagn “wiki + tagging” framework. There is a culminating open house event taking place on site in Chatham, NY on August 25th. We are arranging for a live web stream Hangout-on-Air next week to recap the Seed Project’s accomplishments in preparing for the upcoming “beta” Leader Lab run in the Fall.

Want to apply to be a part of the next cycle? Want to see about starting your own Lab, or similar, to nurture the seeds of abundance for a post-monetizing society? Get in touch, and be in trust. As this project is based sqaurely in gift economics, we do fervently invite your contribution of goods, services, and attention. I have some particular requests for additional camera equipment to further the Media and Storytelling work track, and you can browse other project requests on the Wish List page. Take part, spread the seeds, cross-pollinate: rise up in communion as a rich, resilient stand!