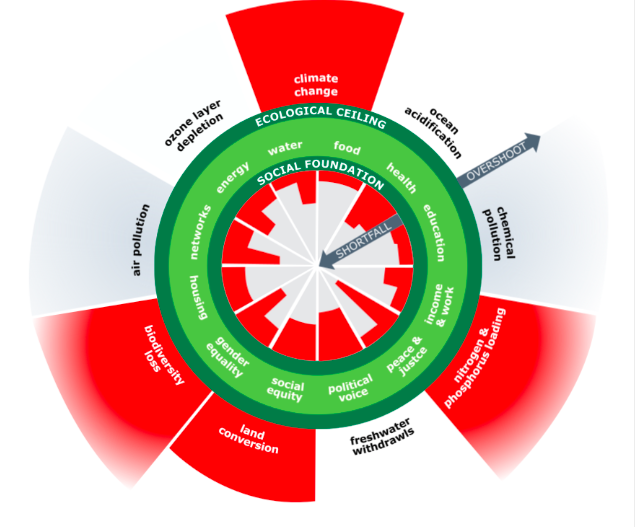 If a doughnut isn’t the first thing that pops into your head when you think about saving the planet and fixing the economy, I wouldn’t blame you. But, as it turns out, a doughnut might be just what we need right now.

As the world continues to crumble around us, communities and cities have been turning to an economic model known as “Doughnut Economics.” The “doughnut” is an idea that was first presented by renegade economist Kate Raworth in her bestselling 2017 book, “Doughnut Economics: Seven Ways to Think Like a 21st-Century Economist.”

The idea is based on an image that contains two rings. The inner ring represents our social foundation and the outer ring represents our ecological ceiling. The goal of the “doughnut” model is to get humanity into the doughy center — the space where we are meeting our economic needs while remaining within planetary boundaries.

“So many people are saying we need a new economic story,” Raworth says. “We need a new narrative of what the economy is, and I agree with that. But the most powerful stories are the ones told with pictures. And if we don’t redraw the pictures it’s going to be very hard to tell a different story.”

The most prominent image that is associated with economics is probably the supply and demand curve. And while useful in certain contexts, Raworth wants to replace this image with that of a doughnut. Her vision is one which rejects our current attachment to endless economic growth while making sure that humanity is thriving.

“What is the goal of the economy?” Raworth says. “The old diagram that told us what the goal of the economy was that of GDP growth, which is just an ever rising line going up and up — this deeply rooted notion that forward and up is good. But we know that GDP growth and growth itself is not bringing all the wellbeing that we want in the world. The process we have now is leading to extraordinary environmental degradation and extraordinary inequalities as well.”

By creating policies and frameworks which reject blind, endless growth — policies that lie within the doughnut’s sweet spot, Raworth believes that we can structure our societies in a way that provides communities with the economic securities they need while maintaining a habitable planet.

“The doughnut is trying to represent a vision of the world in which we can meet the needs of all within the means of our planet,” Raworth says. “That is the vision of human wellbeing that it’s depicting. So that every person has the resources and abilities to meet their needs and their rights to food, water, health, education, housing, community, connection, energy, and political voice — so that we can meet all of those needs and all live lives of dignity and opportunity, but doing so within the means of the planet.”

And Raworth is not alone in her vision. Many communities and even entire cities have begun exploring the “doughnut” model as a goal for community and environmental wellbeing as well as for public policy. And although the goal is a global doughnut, all of them will not look the same. The model is flexible and can be applied in a grassroots way by a diversity of communities, cities, states, and even countries. In fact, earlier this year the city of Amsterdam embraced the model as a starting point for public policy decisions.

“The city of Amsterdam was the first city that said, yes, we’re using the doughnut, we’re designing our circular strategy for the city,” Raworth told Shareable. “So we created a Doughnut City Portrait, which was a looking at their city through the lens of the doughnut, and they decided to publish it in April, 2020. Right in the height of their covid crisis. Amsterdam’s deputy mayor Marieke van Doorninck was thinking, are we really going to publish this strategy in the midst of a covid crisis? And she said, yes, actually, we know that transformation becomes possible in crisis. Crisis opens up opportunity and sometimes even in the darkest hour, that’s when we most need to see the light.”

Together, Raworth and city officials were able to build a framework that aims to place the municipality of Amsterdam firmly into the center of the doughnut. The focus is on creating a circular economy, a model that rejects the traditional economic linearity of growth and which instead focuses on how economies and societies can follow a more sustainable and humane path.

“We need to turn those linear lines into circular lines,” Raworth told Shareable. “We need to create economies in which resources aren’t used up, where instead they’re used again and again and again, far more carefully, more collectively, more creatively, and more slowly.”

And it’s not just Amsterdam. Cities all over the world have been inspired by the “doughnut” and have been working to bake the model into their policymaking and their future visions.

“Within six weeks of Amsterdam publishing it, the city of Copenhagen had a vote which was passed with a massive majority to say, hey, look what they’re doing in Amsterdam,” Raworth told Shareable. “Here in Copenhagen we will vote to draw up our own plan and explore what it would mean to become a Doughnut city.”

After realizing how much interest there was in the doughnut model, Raworth and co-founder Carlota Sanz launched the Doughnut Economics Action Lab, or DEAL to create a global network of communities that want to embrace doughnut economics.

“Ever since Kate Raworth came up with the ideas, people have been spontaneously applying them in different contexts — so neighborhoods, cities, and businesses have been picking up the idea,” Rob Shorter of DEAL told Shareable. “The ideas have been put into action for many years now. What DEAL is about is creating space for this emerging community of change makers who are applying these ideas spontaneously and helping people connect around the ideas.”

DEAL’s approach to economic transformation includes reframing economic narratives, influencing strategic policy, and innovating with the DEAL community itself by providing the tools for communities to co-create methodologies that turn the ideas of Doughnut Economics into action. In the United States, Philadelphia and Portland are two cities that are currently in the process of exploring what the model might look like for them.

“Those cities went through a process with city authorities and residents to come up with an approach of taking the global doughnut and saying, how can we apply this to our city?” Shorter told Shareable. “How do we downscale this? So we’re taking our recognition of our global responsibility to the global doughnut, and recognizing what our local aspirations for a thriving city are.”

But it’s not just at the municipal level. Most recently, residents of the state of California have been gathering in Zoom meetings in an attempt to bring the “doughnut” model to their state.

“I read Doughnut Economics when it came out and honestly it was the first glimmer of hope,” Jared Ruiz Bybee told Shareable. “It brought together lots of different threads that I knew were important individually but didn’t have a mental map for them being together. So when Kate Raworth and the DEAL team launched the DEAL platform and were making some of these tools and concepts available to people I was really hopeful that I could participate in something happening in California and later around the world.”

Bybee has been spearheading the efforts to bring the “doughnut” to his state. The group is in their very early stages of development, having had only three meetings so far. But Ruiz is confident that there is interest and excitement around the idea and hopes to introduce it to policy makers once the group has had a chance to develop a “Doughnut Portrait” for the state of California.

“We are trying to stay really broad and open about what it might mean to apply Doughnut Economics in the state of California,” Bybee told Shareable. “Whether that’s at a very grassroots level or whether a statewide policy level. I’m most interested in statewide politics and policy, but other folks from the group are interested in much more grassroots type efforts. And we’re hopeful to create a big enough tent that there’s a space for each of those and everyone in between.”

After setting up a Slack channel and amassing around 100 people, the group created different working groups that focus on the different dimensions of bringing the doughnut model to California, including the ecological dimension, the social dimension, and the business dimension.

“I’ve been listening in on lots and lots of meetings from different agencies across the state of California, and I think there are going to be a lot of friendly ears,” Bybee told Shareable.  “A lot of these conversations are happening already and I think the concept of assessing what it is we do as a state through this Doughnut lens is going to really resonate with policymakers just the same way that it resonates with a lot of people.”

Many of the conversations around bringing the Doughnut to cities or states are in their very early stages. And although there are no public statements coming from the incoming Biden administration, Raworth did recently give a presentation to the Biden transition team, which demonstrates that there is at least some level of interest on the federal level as well.

“The transition team were saying, well, what we really want to hear is ideas that could be enacted in the first 100 days that don’t need further legislative approval,” Raworth told Shareable. “And so I put forward some first one hundred days ideas. But then I said, to be honest, I think the real value of Doughnut Economics is not a one hundred day idea — it’s the mindshift set. It’s stepping back and asking what would it mean for the United States to be a home to thriving people in a thriving place while respecting the well-being of all people and the health of the whole planet? This isn’t the work of a hundred days. It’s not even the work of one presidency. It’s the work of a decade.”

It’s far from certain that the Biden administration will embrace the doughnut model, but as interest and engagement continues and communities continue to work to influence policymakers on both the municipal and state levels, who knows what is possible.

“I’m hopeful that, like with a lot of things, California can take the lead,” Byee told Shareable. “That we can show other states and other places what is possible if there was political will to think about economics and to think about our economy in more holistic ways.”