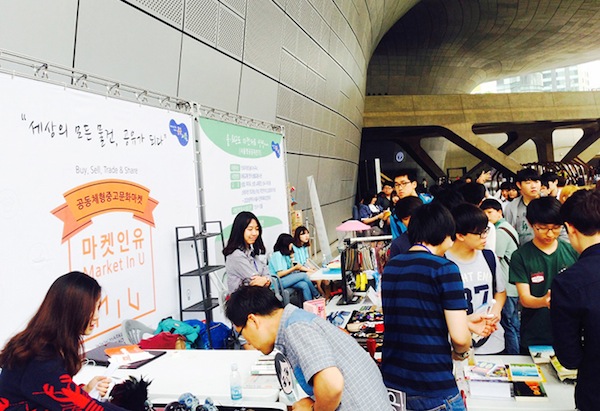 In 2012, the city of Seoul launched Sharing City Seoul to create a local, government-sanctioned sharing culture – establishing the city of 10 million as a frontrunner in the sharing cities movement. City officials committed to cultivating a vibrant local sharing economy, and Seoul was quickly praised as a global sharing leader.

But results on the ground have been mixed, and the initiative remains a work in progress. Sharing City Seoul hasn't taken off as hoped, and awareness of the sharing economy in the city remains low.

In an unpublished survey of city residents by the Seoul Institute, only 12 percent were aware of the sharing economy. A study conducted by Maeil Business Newspaper found that less than two out of every 10 respondents were aware of the sharing economy, while 55.6 percent of respondents replied, “I am not very familiar with it” or “I am not aware of it at all.” When asked, “Are you willing to pay for goods or services other people do not use?” 59 percent responded negatively, unaware of the advantages of sharing.

Despite its three years in operation, “many people are still unaware of the project as a whole,” Seoul’s Sharing Initiative team explained by email. To change that, the Seoul Metropolitan Government (SMG) “is currently focusing on the proliferation of a sharing culture, and is working with local governments to increase awareness among citizens of sharing initiatives.” City officials have doubled down on Sharing City Seoul, and SMG views the sharing economy as the city’s best hope for addressing social and environmental challenges.

Investing in the Sharing City

From the program's inception, the city has supported sharing business mentor programs and incubation projects. Now, the city is helping to finance a handful of “representative sharing star businesses” so these companies can scale in the international sharing marketplace. In addition to money, the city provides these “sharing stars” with customized consulting and promotional help.

Seoul’s most successful sharing enterprises are showing the way through their impressive results: Kiple has shared 8 million pieces of clothing and is now affiliated with 230 daycare centers throughout Seoul; car-sharing companies Green Car and SoCar, created in 2013, boast nearly 500,000 members combined; Modu-Parking has shared 10,000 parking spaces in residential areas and at institutional and organizational lots.

Among the growing network of sharing economy businesses and services in Seoul are:

City officials are also promoting the sharing of urban spaces, opening up public buildings for public use during off-hours, and extending open hours at public museums and art galleries. They’re planning “experiential sharing events and campaigns,” they’ve released thousands of data sets for public use since 2012, and they host an annual Sharing City Seoul Fair to foster sharing culture and introduce the public to sharing apps and services. 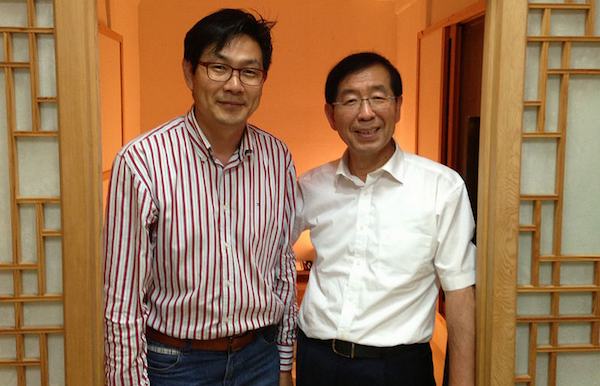 Seoul has received international recognition for its efforts, including Special Mention at the 2014 Metropolis Awards, from the international organization Metropolis, representing 139 member cities. The organization recognized Seoul's sharing city legislation and two years of progress spreading sharing culture and helping ameliorate social and economic issues. Representatives from more than 100 cities have visited Seoul to learn about the city’s sharing policies.

Even as the project has struggled to catch on in the general public, it has produced some real economic and ecological results. According to official estimates, sharing has enabled city residents to save 12 billion won annually, while the city has saved 1.18 trillion won. Sharing projects have also generated 1,280 new jobs, while reducing CO2 emissions by 29,800 tons.

On a smaller scale, the sharing movement in Seoul is emerging in schools, where students of all ages run educational programs about the sharing economy, create sharing clubs, and start groups to share unused school supplies. Some of the children have written songs that celebrate sharing.

“The lessons students learn from these kinds of sharing activities and education,” writes the Sharing Initiative team, “will carry into adulthood, proliferating the idea of sharing on a daily basis for generations to come.”

Some sharing initiatives, such as tool libraries, have struggled to catch on. Demand remains low for some 80 tool libraries created in apartment complexes and public buildings over the last three years. Now, the city is examining how to transform these into better-utilized sharing spaces, such as lending libraries for camping gear, sports equipment, and toys – or use them as workspaces to make, for example, kimchi, Korea's most famous side dish. 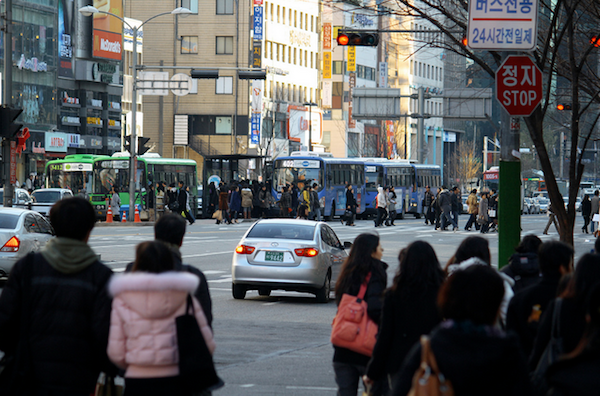 Reimagining Seoul as a Sharing City

Recovering from near-total devastation in the Korean War 60 years ago, Seoul has emerged as a global, high-tech megacity. But South Korea's rapid industrialization has frayed the country's social fabric. South Korea has among the highest suicide and alcohol consumption rates in the OECD (Organisation for Economic Co-operation and Development), and faces rising inequality and a decline in social welfare that has pushed a generation of elders into poverty. Young people face immense social challenges and pressures. As TechCrunch reports, "Thousands of burned out teens slog through the meat grinder that is the South Korean educational system, and 80+ hour, six-day work weeks are the norm for South Korean workers.”

Amid this social deterioration and isolation, new sharing initiatives strive to cultivate community. These efforts include the One Roof Inter-Generational Sympathy Project to connect people of different ages for housing and companionship; PJT OK, a house-sharing service that aims to reduce single person households and now offers 16 shared houses, where 117 people live together; and pilot car sharing programs in apartment complexes.

Monica Bernardi, an Italian PhD student writing her thesis on sharing cities, explains that this sharing ecosystem is part of a larger Korean social entrepreneurship landscape, in which everyone is encouraged to become a changemaker. To help this social economy can thrive, the SMG opened the Social Enterprise Development Center which supports development of an ecosystem that spurs self-development and continuous growth.

“In my interviews,” Bernardi writes, “I registered a lively, energetic and confident atmosphere. The impression is that all these people sincerely believed in the new opportunities that [the] sharing economy carries.” 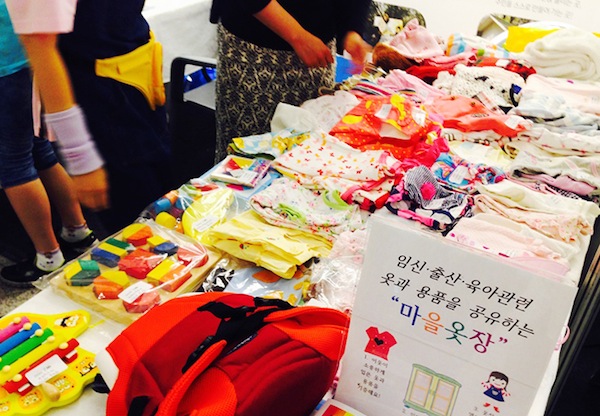 Sharing City vs. the Sharing Economy

As other cities have discovered, there is a difference between a sharing city and the sharing economy. Nanshil Kwon, manager of ShareHub – the information-sharing clearinghouse for Sharing City Seoul, created by Creative Commons Korea (CCK) – says that most of Seoul’s efforts have focused on supporting tech-driven sharing economy businesses without properly defining what a sharing city is. As she explains:

“Seoul declared [itself] to be a sharing city in the hope of solving urban issues through sharing policies and practices. With this aim in mind, the government, sharing companies, and nonprofit organizations have collaborated to build the Sharing City Seoul.

I think the different parties need to make an effort to figure out how we share the city's infrastructure and how we better work together to resolve issues that could be solved through sharing, such as parking, housing, and environmental issues. But so far, most discussions have been more focused on what should be done to boost sharing companies.”

CCK’s vision is to raise awareness about the sharing city by creating sharing projects in local villages, supporting the local open source movement, and engaging in city planning from a public interest perspective.

“Setting good examples and introducing interesting stories is not easy,” says Kwon, “but we believe this is the right path to help sharing culture take firm root in our daily lives in a sustainable way.” 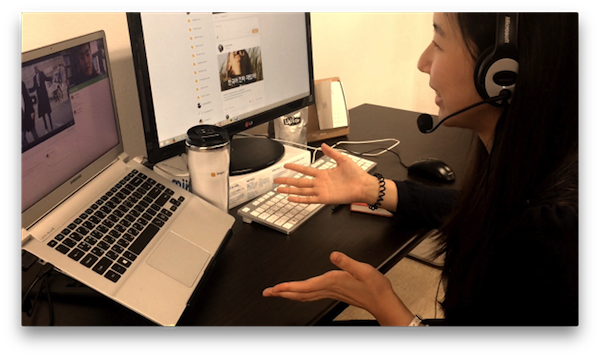 Lingofly connects people to learn and practice a new language

Still, some business leaders emphasize expanding the sharing economy. SanKu Jo, founder and CEO of Kozaza, says that awareness of the sharing economy in Seoul is growing but that, so far, few such companies are “doing business well and getting investments.”

“Although the environmental and social value of the Sharing Economy is very important,” says Jo, “I think, it is still about [the] economy. So, there should be lots of startups doing business well or having backup from VC or government, which will create the business ecosystem. This is very weak point of the sharing economy in Korea.”

To broaden Sharing City Seoul’s reach and appeal, SMG has tapped into the global community of sharing economy thought-leaders and pioneers. They created an international advisory board of sharing economy experts (including Shareable co-founder Neal Gorenflo), and they plan to create a National Sharing City Association, a Consultative Group of World Sharing Cities, and a Global Organization of Sharing.

Still, even with the support of the local government, a strong tech infrastructure, and funding for Sharing City Seoul, the question remains: what will it take to expand awareness of local sharing initiatives and the sharing movement at large?

Paving the Way for Sharing

Like many municipal officials, Mayor Park and the SMG face challenges with global sharing companies such as Uber and Airbnb. In May, South Korean lawmakers passed a bill, aimed at Uber, to ban taxi services provided by private drivers. Last year, the city launched KakaoTaxi, its own local taxi-hailing app, complete with geolocation, information on drivers and users, and a rating system. This kind of local-oriented sharing solution makes Seoul even more of a sharing city, argues Gorenflo.

To address tensions between sharing businesses and existing laws around transportation, insurance, tourism and more, SMG created a Sharing Facilitation Committee. The committee aims to improve laws and policies that “are hindrance to the growth of sharing businesses.” SMG plans to revise existing statutes and create more institutional support for sharing, such as enacting special laws.

By hosting forums that encourage public input on sharing laws and reforms, city officials hope to engage Seoul citizens to create a sharing city that serves everyone, whether through tech-enabled apps or neighborhood-level sharing initiatives aimed at building community.

The SMG’s vision is for a city-wide sharing culture and movement that is led by citizens rather than government. Such a vision, explains the sharing initiative team, “will accommodate the needs of the elderly, and others who may be unfamiliar with smartphones, and that the sharing culture will naturally begin to share products and services without a particular platform. In other words, through sharing, we hope that struggling communities can experience a sense of revival, leading to the regeneration of local areas and eliminating some of the problems of urban life.”