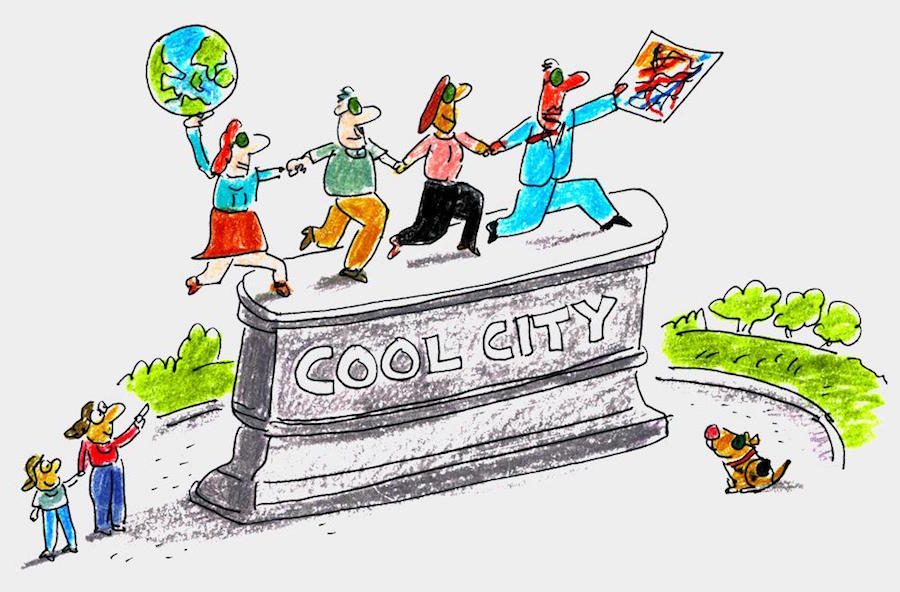 In her 30 years of working in the sustainability sector, Sandra Slater has learned quite a bit about human behavior, including the idea that just giving people information doesn't inspire a change in behavior.

"If you just go in and say, 'Let's lower your carbon footprint,' it's a nonstarter," Slater says. "You have to go in with other motivators." She says people are looking for social connection, meaning, purpose, safety, and efficacy.

Slater is the Northern California director of the Cool City Challenge. It's a program of the Empowerment Institute, a consulting and training organization that aims to reduce the carbon footprint of cities. The group also runs Cool Block, an initiative that helps neighbors connect with each other, share resources, and collaborate on climate and disaster resilience projects.

A Cool Block project starts with the simple act of someone reaching out to their neighbors.

"We say this is the most radical intervention ever designed — knocking on your neighbor's door," says Slater, explaining that in most cases, people are glad they've been asked to participate.

"People are afraid of rejection, that they'll be seen as pushy or that they always want something," she says. "We talk about these things openly because these are all beliefs people have that stop them from doing it." 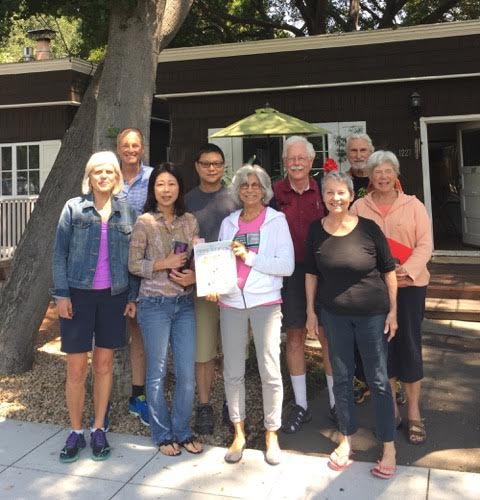 One of the Cool Block teams. Photo courtesy of Sandra Slater.

The Cool Block pilot was launched in various neighborhoods in Los Angeles, San Francisco, and Palo Alto last year, and those groups recently completed the program. After making a few tweaks, the Cool Block team will launch a beta version this year. Once beta participants have gone through the program, the plan is to roll it out to three cities and engage a minimum of 25 percent of their residents. This is the Cool City Challenge.

"We'll see what happens in the culture when you have 25 percent of the population doing something," says Slater, pointing to the work of former Stanford University researcher Everett Rogers who popularized the terms early adopters, early majority, late majority, and laggards. Rogers argued that an idea or a social innovation can scale if you can reach 15 percent of the people — the early adopters. Then the early majority will come along.

"Too often, we preach to the laggards," Slater adds, comparing it to smartphone adoption. "Like any technology, early adopters go through the pain of trying it out. If it works, the early majority comes, then the late majority. Laggards are never going to have a smartphone anyway."

In addition to creating a critical mass of awareness about climate and disaster solutions, Cool Block creates local networks that go beyond disaster planning and carbon-reduction.

"All of a sudden the participants are activated and they're doing things," Slater says.

One group wanted a speed bump, another identified two elderly people and decided to connect with them — not only in case of a disaster, but to have the occasional cup of tea. When a power surge fried all the appliances on their block, one group organized to get discounts at the appliance store and streamline the process of replacing the appliances. Groups created informal sharing systems by creating a document of goods and tools that are available.

By partnering with cities, Cool Block organizers also raise awareness about resources that people may not know about, including rebates for solar energy, community classes, block organizing initiatives, and party packs people can share.

The human scale nature of the Cool Block means that everyone, from those just starting to learn about the importance of climate issues to sustainability veterans, can engage in the program and with their group in meaningful ways.

"There are always ways to deepen your practice," Slater says.

Editor's note: This piece was originally published on Jan. 11, 2017. We're sharing it again as part of our special series on shared, cooperative, and community-led energy projects across the globe.