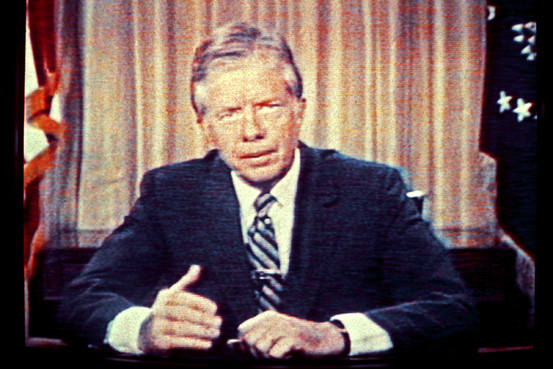 On July 15, 1979, President Jimmy Carter spoke to the American people about the "Crisis of Confidence" faced by Americans who were losing faith in the government and who increasingly feared that their children would be worse-off than them. In this famous speech, Carter laments the loss of American values in the face of rising consumerism.

Our people are losing that faith, not only in government itself but in the ability as citizens to serve as the ultimate rulers and shapers of our democracy. As a people we know our past and we are proud of it. Our progress has been part of the living history of America, even the world. We always believed that we were part of a great movement of humanity itself called democracy, involved in the search for freedom, and that belief has always strengthened us in our purpose. But just as we are losing our confidence in the future, we are also beginning to close the door on our past.

In a nation that was proud of hard work, strong families, close-knit communities, and our faith in God, too many of us now tend to worship self-indulgence and consumption. Human identity is no longer defined by what one does, but by what one owns. But we've discovered that owning things and consuming things does not satisfy our longing for meaning. We've learned that piling up material goods cannot fill the emptiness of lives which have no confidence or purpose.

The symptoms of this crisis of the American spirit are all around us. For the first time in the history of our country a majority of our people believe that the next 5 years will be worse than the past 5 years. Two-thirds of our people do not even vote. The productivity of American workers is actually dropping, and the willingness of Americans to save for the future has fallen below that of all other people in the Western world.

Sound familiar? Setting aside the religion issue for the moment, it's clear that we face many of the same problems Carter discussed in 1979 today – and more. We are no longer a nation at peace everywhere around the world. The energy crisis has worsened. Consumer debt and national debt is out of control. Millions of Americans have been pushed out of their homes and unemployment is reaching record highs. Still, in the face of clear evidence that rampant consumption is unsustainable, we measure the health of our economy by our spending. Still, we measure the quality of American life by our ability to spend. It's like consumerism has practically replaced citizenship. But how did this happen? How did we go from a nation of citizens to a country of consumers? Liberals will argue that rampant de-regulation was the culprit. Conservatives will say that free market capitalism is the purest expression of democracy. Personally, I'm less interested in esoteric discussions about economic theory than I am in conversations about how we, the citizens of America, can impact the future of our own communities. How can we re-build the sense of community and common purpose in our local neighborhoods? How can we restore values of thrift and saving for the future? How can we work together to restore a sense of confidence in the future of America?

We are at a turning point in our history. There are two paths to choose. One is a path I've warned about tonight, the path that leads to fragmentation and self-interest. Down that road lies a mistaken idea of freedom, the right to grasp for ourselves some advantage over others. That path would be one of constant conflict between narrow interests ending in chaos and immobility. It is a certain route to failure. All the traditions of our past, all the lessons of our heritage, all the promises of our future point to another path, the path of common purpose and the restoration of American values. That path leads to true freedom for our Nation and ourselves.

21 years after Jimmy Carter delivered his speech, a movement is growing to take up his mission to "commit ourselves together to a rebirth of the American spirit." Neighborhoods across the country are taking their communities into their hands. The number of farmers' markets has more than tripled since the mid-90s. Activists in cities across the country are supporting community projects like urban farming, bicycle lanes, and community art projects. Location-based technologies like Foursquare and Loopt are exploding in popularity as citizens are seeking to be more connected to their local communities.

In their upcoming book, What's Mine is Yours, Rachel Botsman and Roo Rogers argue, "[In] the 20th century of hyper-consumption we were defined by credit, advertising, and what we owned, and how in the 21st century of Collaborative Consumption we will be defined by reputation, community, and by what we can access." Collaborative Consumption is an explosive movement of "sharing, bartering, lending, trading, renting, gifting, and swapping… that is transforming business, consumerism and the way we live." The authors examine the growth of services like ZipCar, Swaptree, Couchsurfing, and NeighborGoods. As the founder of NeighborGoods, a peer-to-peer lending and borrowing service for local neighborhoods, I'm proud to be a part of this citizen-driven effort to rebuild local communities and restore confidence in America's future.

But how can borrowing and lending household goods help restore confidence in America's future? At NeighborGoods, we believe that hidden inside all the stuff you own is a whole bunch of latent value. The items you are not using on a regular basis hold latent monetary value as well as social value. Obviously, when you share objects with others, you are helping your neighbors save money. By getting more use out of your power drill, you are extracting more of its monetary value. By sharing that power drill, you are also creating stronger social bonds with your neighbor, thus extracting the hidden social value in that object. We've spent most of the 20th century buying objects and building fences to protect them. NeighborGoods and other sharing services help us lower those fences as we transition into the more sustainable, less consumer-driven economy of the 21st century. By lowering your fences and sharing with people around you, you are actively participating in the Collaborative Consumption movement. You, my generous and forward-thinking friends, are true citizens.

Citizenship is the state of being a citizen of a particular social, political, or national community. Citizenship status, under social contract theory, carries with it both rights and responsibilities. "Active citizenship" is the philosophy that citizens should work towards the betterment of their community through economic participation, public , volunteer work, and other such efforts to improve life for all citizens. In this vein, schools in some countries provide citizenship education. Citizenship was equated by Virginia Leary (1999) as connoting "a bundle of rights — primarily, political participation in the life of the community, the right to vote, and the right to receive certain protection from the community, as well as obligations." – Wikipedia.org Video and transcript of "Crisis of Confidence" speech via Miller Center of Public Affairs, University of Virginia.