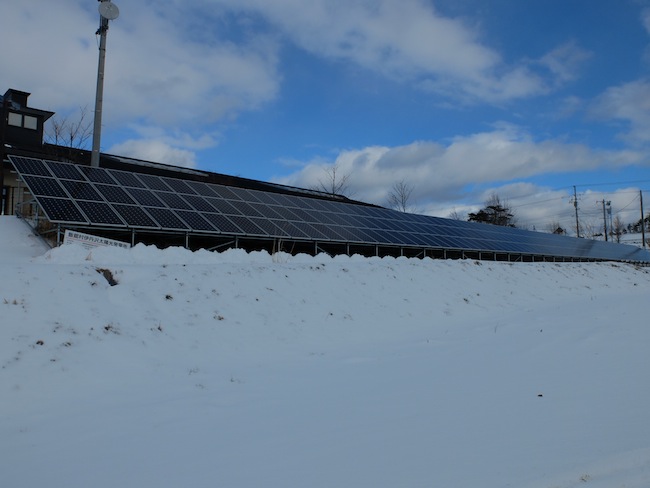 In 2011, the Great East Japan Earthquake and tsunami ravaged the Fukushima prefecture, in the Tohoku region of Japan's main island of Honshu. The natural disaster was catastrophic — 15,894 dead, an estimated 470,000 displaced, and more than 2,500 are still missing. In Fukushima, the scale of the "man-made disaster" that followed was just as devastating.

The Fukushima Daiichi Nuclear Power Plant melted down, forcing residents from numerous nearby villages from their homes. In a way, the power plant was a symbol of the prefecture's vulnerability. Though it was located in Fukushima, it was providing power almost entirely to Tokyo's metropolitan area.

The same could be said for the region's numerous hydropower facilities. Owned almost entirely by a few large companies, the benefits of these corporate energy corporations flow to big investors and residents of Tokyo, and not to people in Fukushima.

"It is an energy monopoly," says Tetsunari Iida, director the Japan-based Institute for Sustainable Energy Policies. "Only a small number of people [are in control], and they neglected other values, such as risk. They pushed nuclear on us with huge amounts of money and political power."

Thus, in the aftermath of the 2011 earthquake and the nuclear disaster, it was Fukushima residents who suffered the consequences. Tourists stopped visiting the region due to fear of radiation. There was not a single visitor at any of the hotels at the once-thriving tourist town of Tsuchiyu Onsen Village — despite the fact that the village was located a safe distance from the nuclear fallout zones.

"[Fukushima] had been damaged badly by the nuclear accident, but also a great part of the damage was caused by rumors," says Kaoru Kobayashi, mayor of Fukushima City.

Rumors also affected the prefecture's other major industry — agriculture. Fukushima is famous for its fruits. It also produces some of the best quality rice in Japan. But unfounded fears led many Japanese to stop buying any produce from the region — even from areas far from the nuclear plant — leading many farmers to despair and in many cases, commit suicide.

The scale of the disaster is hard to comprehend. Today, nearly six years after the disaster, numerous villages in the region remain off-limits due to radiation fears. The clean up efforts are still ongoing. Yet, from the ashes of disaster, a new movement is seeking to transform the dynamics that left residents so vulnerable in 2011, and build a prosperous, clean energy future for the region.

One of the leaders of this movement is Yauemon Sato, co-founder of Aizu Power, and the operator of a ninth generation family run sake brewery in Aizu, Fukushima. Despite his strong ties to the region, the nuclear disaster was a wake-up call for him. 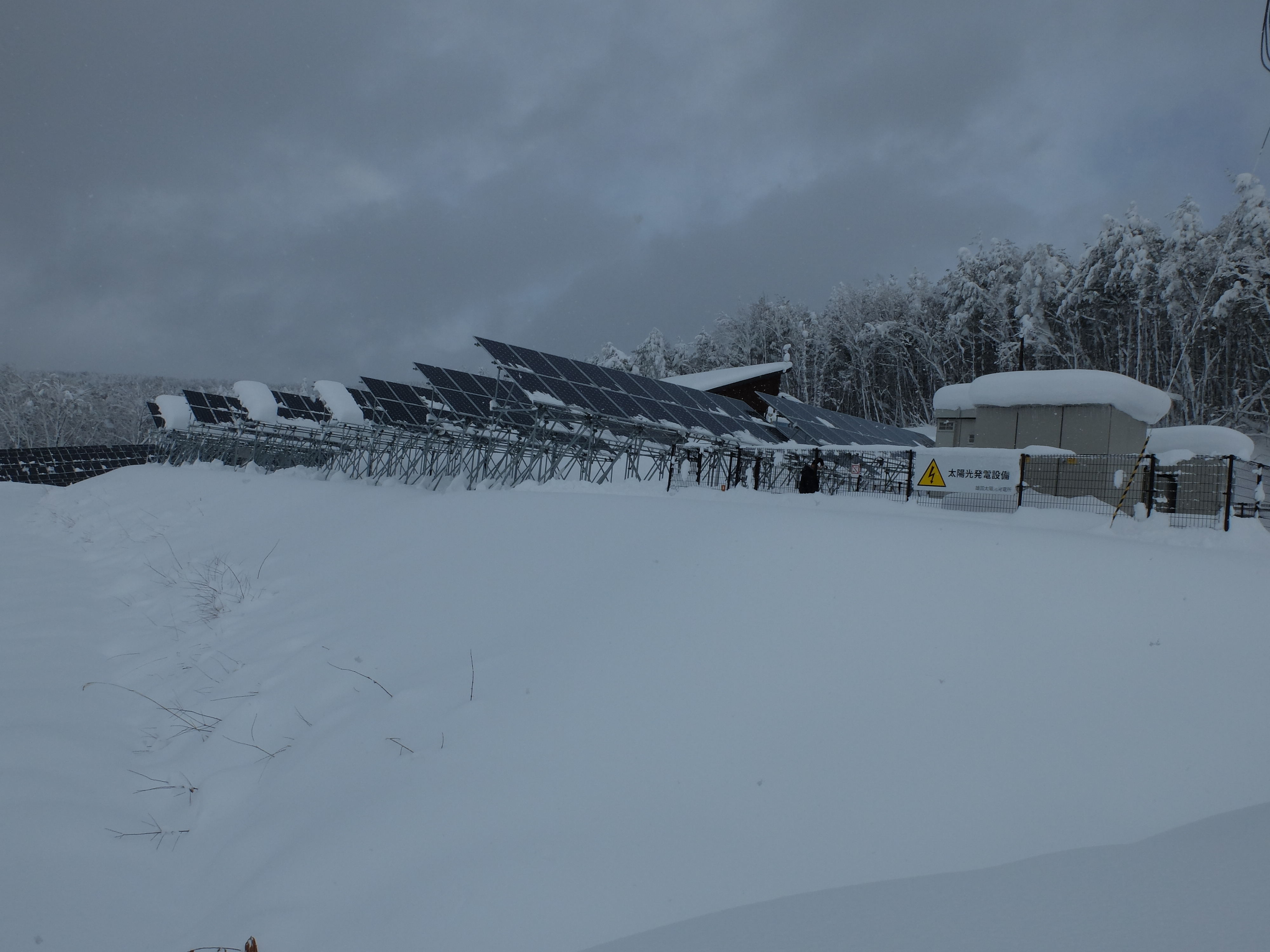 "This accident proved how unsafe we were," Sato says. "We had the responsibility to change, or the future generations are going to question us as to why, even after this disaster, we didn't change."

Sato and others knew that waiting for Japan's national leaders to lead would be a folly, as the big power monopolies still held considerable sway in Tokyo. So they decided to take matters into their own hands and start a new, local company called Aizu Power to bring new energy options to the region. Though set up as a corporation, Aizu Power is, according to Sato, run as a cooperative, with buy-in from local municipalities. Its goal is to empower locals to control their power generation options and gain income from Fukushima’s vast renewable energy resources.

Today, his company currently operates a dozen small-scale solar power facilities across inner Fukushima. All were built with community involvement, and show that even in a snowy region, solar is a viable option.

Aizu Power is just one example of a number of energy alternatives that are sprouting up in Fukushima. In nearby Tsuchiyu Onsen Village — the same village that saw tourist numbers drop to zero after the quake — a new, community-owned, geothermal plant is now providing energy to residents and others through the grid.

"Our goal was to create employment for younger people, produce energy by ourselves, and make the power plant a symbol of our reconstruction," says Norimichi Chiba, senior managing director of Iitate Power.

The geothermal plant is a truly community initiative, with more than 40 villagers having invested in the project, making them all part owners. All the plants' revenues return to the village, providing a new source of income. It has also become a tourist attraction due to its unique visible binary design.

Community power also works in regions that were directly impacted by the disasters. Not far from Tsuchiyu Onsen village, Chiba's company, Iitate Power, is developing innovative, small-scale solar installations in Iitate village, which was evacuated after the meltdown of the Fukushima power plant, when winds sent a radiation cloud to this valley and contaminated the land.

One of the company's innovations is "solar sharing," which are small, raised solar photovoltaic devices that can be installed above farmland. This allows farmers to continue farming, while also getting new income from solar. Currently, 13 of these are in operation in Iitate Village, with another 16 in various planning stages.

Iitate Power, Aizu Power, and the Tsuchiyu Onsen Hydropower plant are just three examples of many small-scale, local initiatives cropping up across Fukushima. While the first goal is for the region to recover from the 2011 disaster, the larger goal is to change all of Japan.

Despite the huge negative impacts of the nuclear disaster, politicians from outside Fukushima are seeking to restart the country's remaining 50 functional nuclear plants, under pressure from companies like Tepco, which operated the Daiichi Plant. The reason? They want to keep control of Japan's power sector, despite the fact that the country has survived fine for half a decade without nuclear energy. Moreover, they see renewables as a threat.

"Less democratic societies are more familiar with nuclear, and this structure is now changing with renewables," says Iida. "Renewables connect with local values — the sun is shining everywhere, wind blows everywhere, and the locals right to use this power, that is… democratization."

If clean, renewable, community energy continues to expand, the arguments to restart nuclear power plants and build new coal power plants will no longer hold sway. And that is a future that Fukushima, and Japan, can be hopeful for.

Editor's note: This piece was originally published on Feb. 14, 2017. We're sharing it again as part of our special series on shared, cooperative, and community-led energy projects across the globe.