Ted Howard, Executive Director of The Democracy Collaborative, calls it "the next great advance for American philanthropy": the embrace, by a small but not insignificant group of community foundations, of an "anchor mission." An anchor mission builds on the concept of anchor institutions, large organizations that are rooted in place and play a significant role in the local economy. While universities and hospitals—"eds and meds"—have a long history as anchor institutions, community foundations can fulfill a similar role, particularly if they direct their resources to local economic development. A new report from The Democracy Collaborative, A New Anchor Mission for a New Century, identifies an emerging trend of community foundations adopting a community wealth-building anchor mission, and asks why and how similar organizations might follow suit.

The reorientation of community foundations toward an economic anchor mission represents a new course for the groups, away from passive grant making in favor of a higher-risk, potentially higher-reward model of community support. According to Marjorie Kelly and Violeta Duncan, authors of the Democracy Collaborative report, a couple of forces are responsible for the trend. The first is competition from nationally-managed donor advised funds like the Fidelity Charitable Gift Fund. To compete with the big names, community foundations must emphasis their place-based identity by participating in projects with an identifiable local impact. The second factor is the economic distress generated by the Great Recession, which in turn has led to a focus on jobs and local business development. 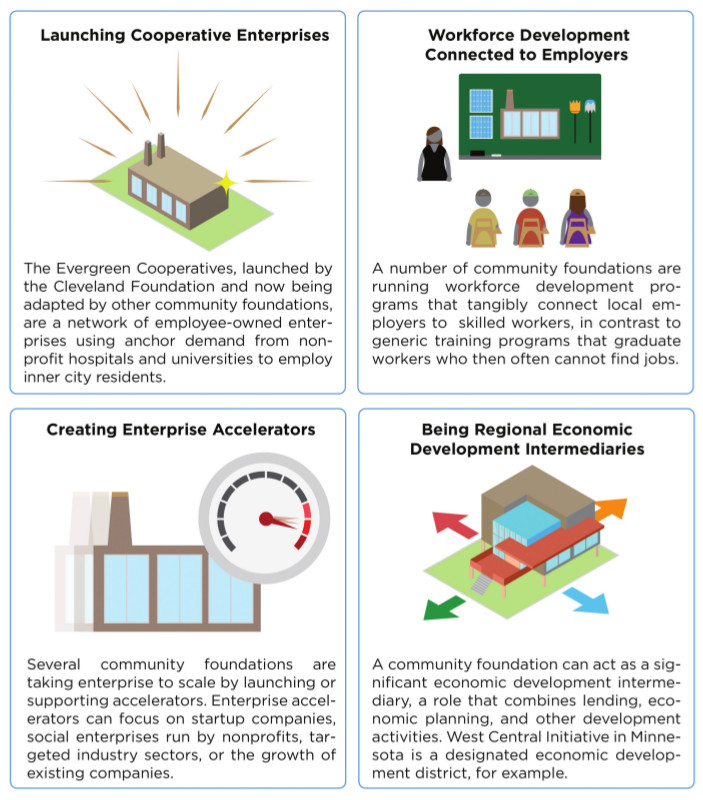 Direct support for economic development is one strategy by which community foundations can engage in community wealth-building. (A New Anchor Mission for a New Century, 2014)

Kelly and Duncan identify two strategies by which community foundations can engage in community wealth building. One path involves explicit support for economic development through the creation of cooperative enterprises or enterprise accelerators, or by acting as lending or financial planning intermediaries. The second strategy is impact investing, which can mean investing directly in local start-ups, or contributing to community banks that in turn provide loans to place-based projects. The two strategies are not mutually exclusive, nor do they eliminate the need for basic services like food and shelter. 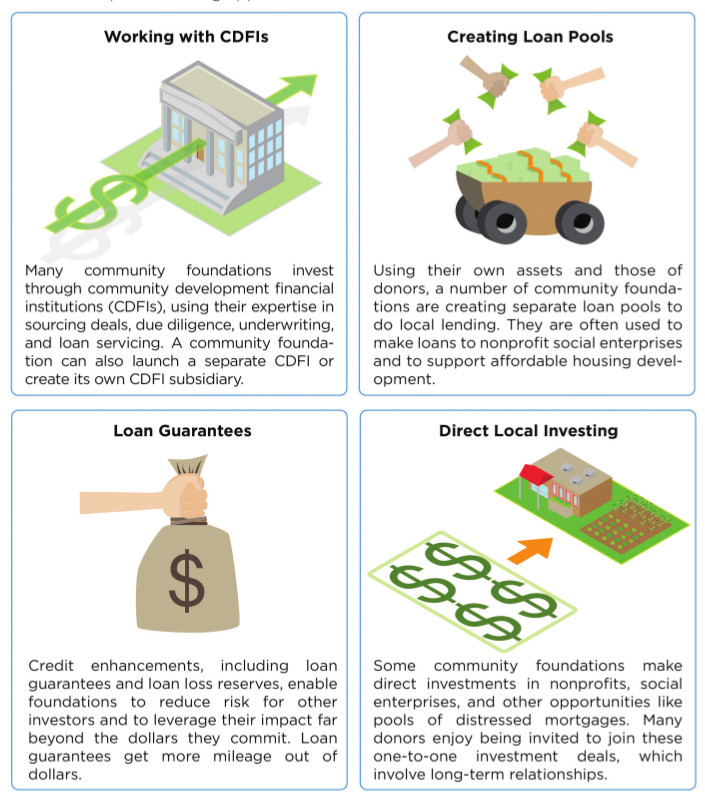 Impact investing is a second strategy associated with an economic anchor mission. (A New Anchor Mission for a New Century, 2014)

The number of community foundations currently identified with an economic anchor mission remains low in part because of the challenges involved in revising an organization's philanthropic model. For instance, board members and foundation staff may be put off by the higher risk associated with economic development and impact investing vis a vis traditional grant making. More generally, Angela Jones Hackley, acting president of The Community Foundation for the National Capital Region, observes, the adoption of an economic anchor mission involves "shift[ing] your mindset from a poverty-reduction frame to a wealth-building frame—not just providing direct services, but how you really set people on a path to take ownership of their lives."

Nevertheless, the Democracy Collaborative report suggests, the move from so-called ATM philanthropy to community wealth-building can benefit community foundations as well as the local residents they serve. With their flexible combination of donor and discretionary funds, community foundations are uniquely positioned for out-of-the-box giving. Moreover, some of the financial models involved—like impact investments—offer improvements over passive grant making in that the funds involved can be recycled. Finally, an anchor mission fulfills the moral (and legal) imperative that a community foundation do the maximum amount of good with the money it has. Kelly and Duncan quote Martin Garber-Conrad, CEO of Edmonton Community Foundation in Canada. "If you can do all the good that needs to be done through grants, then do that," he said. "If your endowment is big enough and meets all the needs put forth in your mission, then do that. But if there is more that needs to be done, then you need to think about other things."