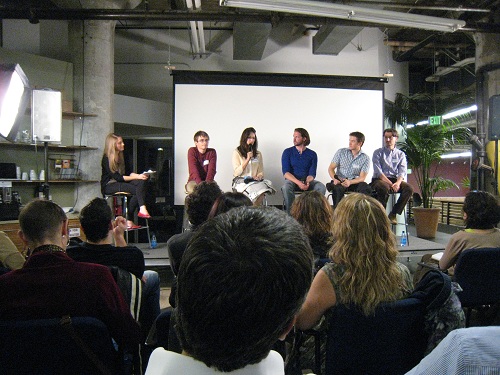 Last night Legit, in partnership with Shareable, hosted the launch of Collaborative Chats at Hub SoMa. People from all aspects of the San Francisco sharing community came out to learn more about the series’ first topic – Building Community in the Sharing Economy. Casey Fenton from CouchSurfing, Shelby Clark from RelayRides, Elizabeth Mueller from Airbnb, and Paolo Parigi and Bogdan State who are studying trust at Stanford University, came together to explore their experiences with building community, and how it influences the adoption of sharing and collaborative consumption.

While the conversation took a myriad of turns through the night, there were some themes that clearly stood out as questions the sharing community as a whole is interested in exploring around building community.

What brings people into the sharing economy? And what keeps them sharing?

For many of us in the sharing community, we want to know what the gateway is for people to begin to start adopting sharing practices. What draws people to use a P2P car sharing service or Airbnb? The panelists agreed that the functionality of sharing – being able to get your needs met in an efficient way – is what initially draws lots of people, but that community, the ability to meet and interact with others in a positive way, is what keeps them sharing. Casey said that many of his users start using CouchSurfing just as a convenient service, but end up truly believing that sharing is a movement, and are eager to become part of the larger community.

How important is building trust?

Trust and security are big issues within sharing communities. Initially, in order for someone to share, there’s an inherent small level of trust that a user must have to try out a service, and that initial trust can be aided by how well a service can build trust, connection, and safety into it's platform.

One form the need to create trust has taken is the creation of reputation systems – but there is a lot of debate about how to regulate these systems and whether they can actually inhibit the natural building of trust and community. For example, sites like eBay had a tough time regulating retaliatory negative feedback from users (e.g. – if you write me a negative review, then I’m going to write you a negative one). So, they along with many other sites have ended up “filtering” negative feedback. However, hiding negative feedback also inhibits a feeling of trust. So, how can people who manage online communities allow people to be honest about their experiences while at the same time promoting a positive, self-policing, community? And how do you protect people who are not actually at fault but get bad reviews? Some possible solutions that were suggested were encouraging people to resolve their issues with their fellow users first, or to report negative feedback directly to the service so that an independent party can regulate reputations. Another conversation that’s beginning to happen is the idea of creating a sort of reputation system that spans across platforms. Is it fair to assume that someone who is a good Airbnb user would also probably be a good car sharer? Could it be possible to aggregate someone’s reputations on different platforms into one reputation score?

How can we insure that online sharing communities are fair and democratic?

As was mentioned last night, communities are nothing new – and there’s just as much of a history of bad, dysfunctional communities as there is good ones. There is always the potential for problems to abound in communities. They can become homogeneous, exclusive, or begin to police themselves based on the majority’s norms. How do we make sure that sharing communities both online and off stay open, fair, and democratic? Reputation systems in the current economy, namely, credit scoring agencies, tends to skew in the favor of people with higher incomes with more affluent backgrounds and create a stratified system of haves and have nots. If someone were to get a bad reputation in the sharing economy, would they have the opportunity to get to repair it? How? And who would be the authority that decides who is a fit user and who isn’t? While the answer is unclear, I think it was agreed that it’s important to not recreate the same inequalities that exist in the current economy in this new Sharing economy, and that a commitment to transparency and democracy are important to the future of sharing communities.

If sharing platforms are helping to lower the barrier to connection for people, what does that mean for our society?

Casey mentioned that many of his users feel like CouchSurfing can help them connect deeply to others in a way that’s pretty rare in every day life. That connection, fostered by being able to use a medium like a car or a couch, is something that helps shift people’s perspectives about themselves, their communities, and how they view the world. Paulo and Bodgan mused about whether or not repeated positive experiences with trust and sharing can help change the rest of people’s lives by shifting their perspectives of the world. Bodgan ended the panel by saying that positive sharing experiences have the power to counter the vicious cycle of distrust that happens when we see bad things happen in society. What if every sad thing we hear about – A Ponzi scheme and people losing their retirement, for example, were countered by a positive experience of being able to trust a stranger and have a positive interaction?

We’d love to hear your thoughts on these topics, or anything else you’re wondering about when it comes to building community in the sharing economy. Please share any comments you have below and help us continue this conversation!