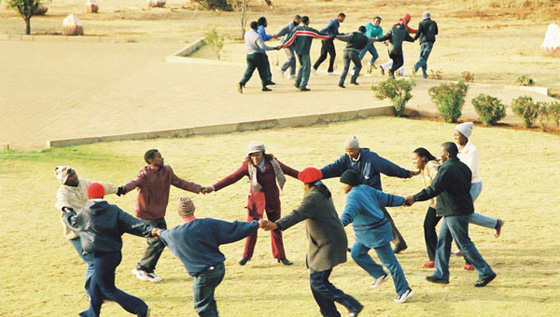 Worker co-ops, meet green jobs. Green jobs, allow me to introduce you to worker co-ops. I think you two have much in common and could be great friends.

Such was the take away from a Worker Co-ops & Green Jobs panel discussion March 18 in Berkeley, California, presented by Co-opist. The panel was made up of Melissa Hoover, executive director of the United States Federation of Worker Cooperatives (USFWC), and the executive directors of two San Francisco Bay Area worker cooperative incubators, Hilary Abell of WAGES and Dana Harvey of Mandela Marketplace. Mandela Marketplace outreach specialist, James Berk, joined Harvey in fielding questions.

Although the cooperative and green jobs movements seem to know little about each other, the discussion suggested that there might be some benefit to building alliances to meet the shared objective of creating just, heathly, and ecologically and environmentally sustainable jobs.

Mandela Foods Cooperative is a grocery store and nutrition education center in West Oakland that opened in 2009. The worker co-op was incubated by the nonprofit, Mandela Marketplace, in response to a 1999 assessment that the West Oakland community was “food insecure.” The grocery store specializes in fresh, healthy food that is sourced from local and minority farmers whenever possible.

“It provides an entrepreneurship opportunity for people who otherwise might not have that opportunity, which then gives them a political voice they may not have. As business owners they are going to be heard more than as employees,” said executive director Harvey.

Harvey attributes the success of the Mandela Foods Co-op to the way the community was engaged in its creation. Key decisions about making it a worker co-op of local people, and focusing on healthy, local food sources where driven by the neighborhood, “rooting it in the community and assuring its economic sustainability.”

When asked the question, Hoover referenced the seven International Cooperative Principles that co-ops recognize. Most of the principles address internal co-op governance, such as #2, Democratic Member Control and #3, Member Economic Participation. But, the newest principle, #7, Concern for Community, added in 1995, dictates that, “Co-operatives work for the sustainable development of their communities through policies approved by their members.” Perhaps it is here that a commitment to work that is green and sustainable resides.

The panel speculated that parallels to the green jobs movement may go deeper still. Workers-owners are empowered to create work that is healthy for themselves and improves their quality of life. The democratic control of the co-op means that the business makes decisions that benefit broadly, benefiting the entire membership, and less directly, the community/ties they are a part of. In this way, worker co-ops are inherently concerned with community, and by extension, tend to do work that is sustainable and green.

With its inclination for community stewardship, and track record of success, the worker co-op business model seems like it would be heavily promoted by those pushing for green job creation. In spite of the recent publicity for worker co-ops in Cleveland (Evergreen Cooperative Laundry, Ohio Cooperative Solar, and Green City Growers) and in the Michael Moore film, “Capitalism: A Love Story,” worker co-ops have been conspicuously absent from green jobs policy conversations.

Green job initiatives have popped up around the world in the past several years, conveniently addressing both a global economic depression and the need for quick adaptation to a changing world. The United Nations Green Jobs Initiative recognizes the need for new jobs in the renewable energy, energy efficient building, and sustainable food systems sectors. The initiative also acknowledges the need for training and skills building for these new jobs and for creating work that is just and economically sustainable.

Nonprofit organizations like WAGES and Mandela Marketplace take this same holistic view and consider training and skill development an essential part of their incubator programs. Equally important to getting the new worker co-ops off the ground is raising the capital needed to start and grow the business, and these organizations assist new worker-owners with that as well.

Melissa Hoover noted that it is notoriously difficult to fund worker cooperative startups in the US. Most banks are not comfortable lending to a group, and are only set up to lend to a single owner or partnership. Credit unions, which are cooperatives themselves, are limited by law in how much they can lend to business development. Recently, cooperative organizations such as the National Cooperative Business Association have been lobbying to have the US Small Business Administration provide loans to co-ops. Changes to federal credit union laws and a worker cooperative credit union are also in the works.

Cooperatives receive less recognition in the US relative to Canada and much of Europe. But, co-ops may have an opportunity to ride the coattails of the green jobs, sustainability, and local economies popularity and mainstreaming. Perhaps in the future there will be more cross-pollination with advocates for these movements attending each other’s conferences, joining each others’ organizations, and generally learning more about each other.

At the national and international levels, the cooperative movement could be more explicit about the green, local, and sustainable nature of co-ops. Doing so might bring increased public awareness of co-ops, influence policy, and possibly bring more funding to co-op startups.

This article originally appeared at Co-opist, a nonprofit that gives cooperative workers what they need to grow cooperative business.