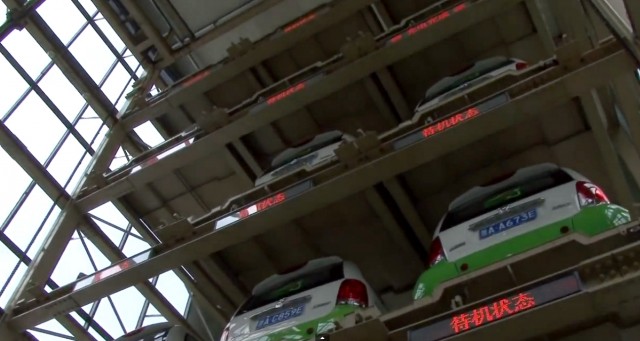 A Chinese electric vehicle (EV) manufacturer has a novel approach to making a dent in China's smog problem. Kandi, a publicly traded company on the NASDAQ exchange, is building networks of urban EV car share "vending machines" — garages that can dispense up to 300 fully charged electric shared cars — in China's most polluted cities to address the problem at scale.

China's urban smog problem is notorious. According to a 2015 study conducted by the University of California Berkeley, 38 percent of the population breathes toxic air on a daily basis, and 1.6 million die annually from smog. That's about 4,000 smog-related deaths per day.

And although the study points the finger at coal burning for electricity as the culprit, automobiles are widely believed to be a significant contributor to smog in major cities. In May, 2014, the Chinese government announced plans to remove 6 million vehicles from the road to combat smog, and has been subsidizing the EV industry in recent years.

Can electric vehicles alone make a difference? Tesla is looking to build its electric cars in China, and expects Chinese EV sales to exceed those in the United States by 2021. And manufacturing of electric cars in China is spiking. But with China's rapidly expanding urban population, and attendant problems like "nightmarish"  urban gridlock, it seems unlikely that single-owner electric vehicles will prove a panacea for China's urban woes.

But by building networks of EV car share "vending machines" in major smog- and traffic-choked cities, Kandi is leveraging sharing to address the issue head-on by reducing the number of cars on the road. In addition to selling vehicles to private owners, Kandi is constructing garages to deliver fully charged vehicles to users on an hourly basis for approximately $3-$4 per hour. Vehicles are also available for longer-term leases for $130-$160 per month, according to tharawat. The vehicles can go uo to 75 miles on a single charge, and can travel up to 50 miles per hour. Kandi's multilevel garages can store as many as 300 cars.

Shenzen-based analyst Guotal Junan told therawat that the business model is strong because it eliminates the need for individual owners to charge cars.

The automaker expects to expand into 15 Chinese cities by the end of 2014, according to Bloomberg Business.