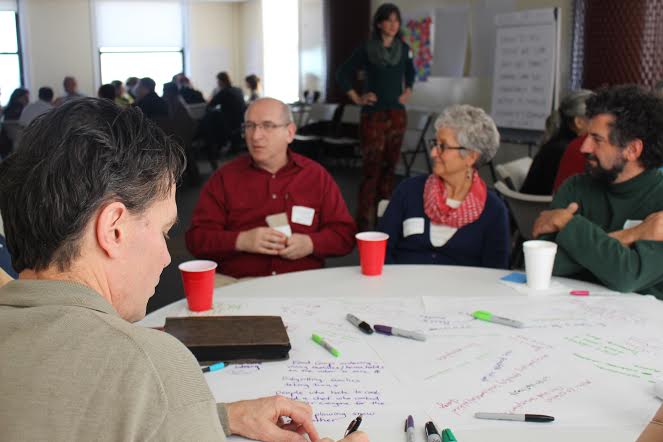 Participants at the Cooperation 2015 conference in February, 2015, a precursor of the Chamber of Commons event. Photo provided by Steve Ediger.

That stalwart community institution known as the Chamber of Commerce may soon have its counterpart in the sharing economy.

The US Chamber of Commons, a startup organization dedicated to "recognizing, supporting and highlighting the "green shoots of a budding Generative Economy," is trying to get a new form of chamber off the ground: one to connect social entrepreneurs, L3C's, B-Corps and other enterprises focused on triple bottom line, sharing-economy approaches to commerce and community development.

The group sees its role as advocating for the four broad categories of organizations outlined in Marjorie Kelly's Owning our Future: (1) Commons Ownership and Governance (2) Stakeholder Ownership (3.) Social Enterprises and (4) Mission Controlled Corporations.

On October 10, the group will hold an event in Chicago and in 30 other cities across the globe to call for the establishment of Chambers of Commons.

The Chicago event is designed to plant the seed for a larger movement. The day will start with a consensus workshop, with a goal of arriving at a shared definition of the Commons. Next up is an action planning workshop to develop a start-up plan for a Chicago Commons, which will be the first iteration of what organizers hope is the first of many Chambers of Commons across the nation and globe.

"We plan on discussing and coming to consensus on what we (the people in the room) mean by the Commons, both material and immaterial," Steve Ediger, one of the project coordinators, said in an email to Shareable. "Then we will plan the startup of the first chapter of a 'Chamber of Commons', an organization that will work to bring other commons-oriented entities together in development and protection of the Commons."

The discussion will address an array of Commons-relevant topics such as the environment, public land, the food supply, public education and transportation, open-source software, the internet, arts and culture and taxpayer-funded scientific research. Unclaimed realms such as the oceans, Antarctica and outer space will also be on the agenda.

In an article for the Huffington Post, writer Sally Duros quotes Michel Bauwens, founder of the P2P Foundation, on the need for a Chamber of Commons:

"The old way is this. Here's a problem. We need resources to solve that problem. We create a hierarchy to direct resources at the problem," Bauwens says.

You can register for the Chicago event here.