Can Video Games Help Shape Cities and Economies of the Future? - Shareable
Skip to content 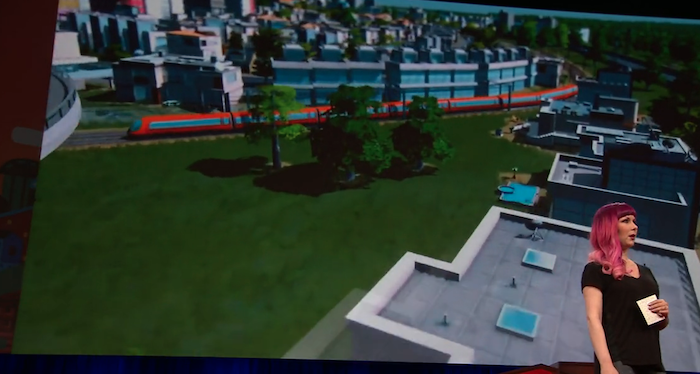 Can virtual worlds transform the world we live in? That question isn't just something high school kids ask — it's a question that professionals across industries are actively asking today. In her TED talk, game designer Karoliina Korppoo explains how player-generated virtual cities could shape the cities we live and work in. Korppoo is the lead designer of the game Cities: Skylines by Finnish game studio Colossal Order, which is designed to provide a realistic urban planning experience for players.

As a city-building game, Cities: Skylines shares some similarities to games popular in the past like SimCity or Roller Coaster Tycoon, but is designed to pose highly realistic urban planning challenges and human behaviors. One of the player-generated virtual cities Korppoo mentions has a tiered structure of concentric circles, with services and industry in the center and residential areas on the outside. This city layout had been theorized about ninety years ago — known as the concentric zones model — and similar models have been tried in places like Auroville in Southern India.

Yet more interestingly, Korppoo mentions another virtual city called Astergea created by the player with screenname Yuttho who has also recorded a YouTube series on his city. In his series, Yuttho interviews city planner and walkability expert Jeff Speck, taking the game to an educational and pragmatic level.

"We know that some urban planners are using it as a sketching tool," Korppoo says. "While the simulation is not completely realistic, it is realistic enough that if something works in the game, it is highly likely that it will also work in the real world."

But using video games as a low-cost simulator and sandbox for real-world ideas isn't exclusive to urban planning. Yanis Varoufakis, economist and public figure active in the DiEM25 movement had experience monitoring and managing virtual economies before he spent time dealing with a real nation's economy. Varoufakis is best-known for serving as Greek finance minister for the leftist Syriza party in 2015 before resigning.

A less-known fact is that before Varoufakis took up this position, he worked as a video game economist for the massive online multiplayer game. The game was Eve Online, a game where the economy is so extensive and complex that monthly economic reports get published on the game's community blog.

"Economic theory has come to a dead end — the last real breakthroughs were in the 1960s … The future is going to be in experimentation and simulation — and video game communities give us a chance to do all that," Varoufakis told The Washington Post. It is in exactly this spirit that virtual reality and game designers like Korppoo are harnessing crowdsourced behavior dynamics — to use video games to inform how we shape our future.

Header image is a screenshot from Korppoo's TED Talk