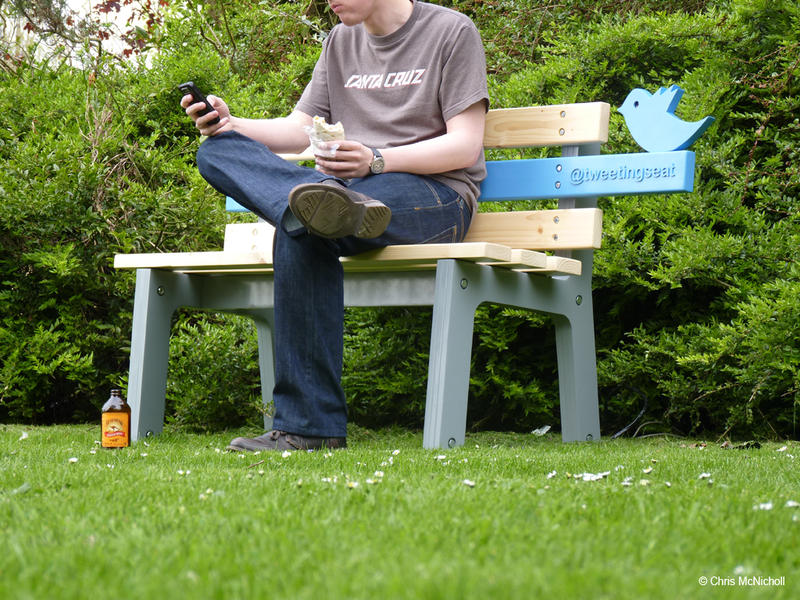 How many times have you seen groups of people out to dinner, with everyone buried in a text message instead of talking to each other?

The sharing economy is fueled by technological innovation, but too often, our physical lives are shoved aside for allure of online activities.

A new project from designer Chris McNicholl aims to explore the potential for connecting physical and digital communities by giving people a new opportunity to socialize via an ordinary park bench.

The TweetingSeat snaps and then uploads images of those who use the bench and the surrounding park environment to its own live Twitter feed (@tweetingseat).

McNicholl, a design student at the University of Dundee in Scotland, says the project stemmed from an investigation of how communities function and encourages people to interact, on both a digital and physcial level:

“TweetingSeat has been created in order to explore the environments in which it is placed and look at the people whom it encounters,” McNicholl explains. “The way in which the bench should be used has purposely been left open, allowing people and communities to build their own relationship with it.”

Of course, as a new concept, the idea of a park bench snapping your picture could be a bit distracting. If all you want to do is sit and enjoy a good book or chat with an old friend, a more traditional bench might be a better choice.

But for municipalities looking to revive public interest (and pride) in green spaces, parks and historical monuments, a social media-loving bench might just do the trick.

You can follow @tweetingseat and view images captured by the seat on TwitPic.

Tell Us: Is a tweeting, picture-snapping park bench inspiring or invasive?