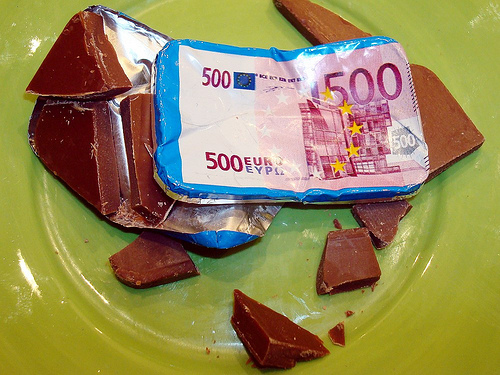 The entire country of Greece is currently facing economic ruin.

In case you haven’t been keeping up with news of the Greek debt crisis, here’s CNN’s take in a nutshell: “Years of unrestrained spending, cheap lending and failure to implement financial reforms left Greece badly exposed when the global economic downturn struck. This whisked away a curtain of partly fiddled statistics to reveal debt levels and deficits that exceeded limits set by the eurozone.”

Right now, Greece’s debt is bigger than it’s economy. That should sound pretty familiar to readers in the United States.

As Greek political leaders toss around the pros and cons of a European bailout of their country’s entire economy, the people of Greece have found their own cashless way to cope.

Tired of inflated prices and devalued money, Greek communities have begun to ressurect an alternative economy from past centuries. In the two years since Greece’s economy has been in really bad shape, more than a hundred networks which deal in non-currency transactions have sprung up across the country.

Instead of tapping into already stressed bank accounts to pay for clothes, food, or even a much-needed respite like art or yoga lessons, people are using their own time and talents to facilitate trades with others in their community.

Think about it: everything from clothing, to home repairs and child care services can be bartered. Of course, there’s no need to wait for a national economic crisis to erupt before utilizing the barter system to procure goods or services that you may need.

Check out these handy Shareable posts for more info about how to organize cashless bartering systems in your own community!

How To Barter, Give and Get Stuff

Top 10 Ways To Save Money Through Sharing

How To Throw A Community Swap Meet