As the director of the American Voices New Play Institute at Arena Stage, Polly Carl has one of the longest titles in the American Theater. Polly

As the director of the American Voices New Play Institute at Arena Stage, Polly Carl has one of the longest titles in the American Theater. Polly produces, dramaturgs, commissions, writes, and consults. She spent two years as Director of Artistic Development at Steppenwolf Theatre and served eleven years at the Playwrights’ Center—seven as Producing Artistic Director. She moderates a lot of panels, sits on committees and boards, and passionately loves her dogs. Her Ph.D. in Comparative Studies in Discourse and Society is from the University of Minnesota. Vijay Mathew is Associate Director of the New Play Institute at Arena Stage and is privileged to assist a talented team by leading the efforts in developing the Institute's documentation and dissemination platform and its notions of cultural innovation. He was previously the Coordinator for the National Endowment for the Arts New Play Development Program as well as a Theater Communications Group Future Leader grant recipient. Vijay has been a fellow and intern at several not for profit theaters across the U.S. as well as an assistant stage director for commercial productions on Broadway. He has a MFA in Directing from New School University. 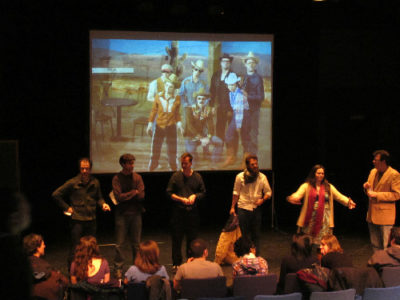