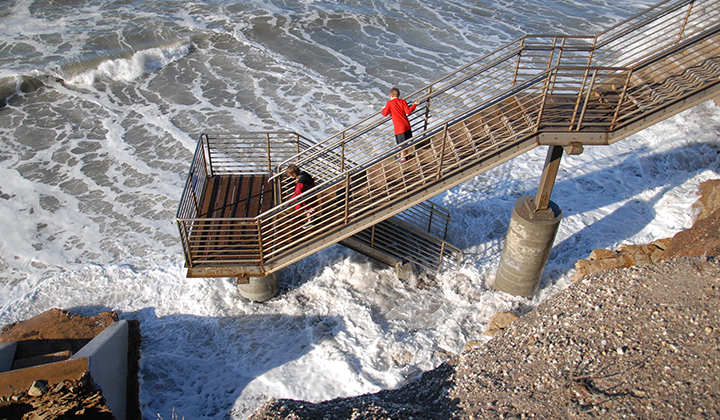 Sea level rise image by HPapendick via Flickr (CC BY 2.0)

Coastal communities across the United States are experiencing tangible impacts of climate change as sea level rise worsens. “Sunny day flooding” and  “king tides” range from annoyance to serious danger in cities like Miami, San Francisco and Seattle. Coastal commissions and city planners are working against the clock to calculate and prepare for a future in which entire neighborhoods may disappear. In order to create effective plans, sea level rise and flood rates need to be carefully documented. But the sheer scale of the problem makes it difficult to track for scientists and lawmakers; researchers simply can’t be everywhere. In California, advocacy groups have found a solution: citizen scientists from impacted neighborhoods can track rise themselves, and their findings gathered into public-facing data bases that can be utilized by thought leaders to  understand the state of sea level rise in their community.

The King Tides Project, run by the California Coastal Commission, is a successful example of a citizen science tracking project. The project’s map (available to the public) tracks sea level rise all over the state through photos submitted by local citizen scientists. To participate, citizens just need a camera or smartphone — they take photos of rise in their area and submit it to the commission to be inputted into their database. Whitney Berry is the climate change program manager for the Ocean Protection Council, a close partner of the commission that utilizes the project and hosts it on its website. She says citizen science is immensely useful for research like hers. Citizen Science “advances scientific research by providing extra hands or eyes, and it includes everyone, so you get participation from folks who might not have a PhD or a Master’s degree, but they have years of local knowledge and have a closer relationship with the area.”

Citizen science projects help researchers, but they are also beneficial for communities who participate. The King Tides Project and those like it are an opportunity to increase scientific literacy and foster critical thinking about climate change through the lens of local needs. “Citizen science allows a better engagement with local people. Just by getting engaged they raise awareness and become a bigger part of the scientific discussion… it gives people a glimpse into the field,” Berry explained.

Sea level rise tracking lends itself particularly to citizen science, because participants don’t need specialized knowledge or training, and they can take photos of whatever they feel drawn to, since impacts can be seen in a variety of ways. Pictures might be of flooded sidewalks or higher-than usual tides, erosion, and other visible signs of the changes that sea level rise can enact on a place. Photos taken before and after king tide season, to show the impact that tides have, are particularly helpful, Berry explained. “One of the great parts about the sea level rise project is that it’s really easy to access. We have other projects, like one where we train scuba divers. But for that project, you need to know how to scuba, have the equipment, [and] the time to learn,” Berry said. “With this, anyone can do it with their phone and we get photos of what people care about… I often tell people to take photos of areas that are impacted which have a special connection to them emotionally, like a favorite park, so we can see that.”

Once the photos are taken, they are used in databases and reports to help guide policy. Photos from the King Tides Project were used to develop the Ocean Protection Council’s (OPC)  Sea Level Rise Guidance, currently being updated. The OPC also uses the photos to drive home the realities of climate change through community engagement. “Sea level rise is one of the most obvious manifestations of climate change, and it helps people to see that it is real and it is going to impact them,” Berry explained. “When you show people photos of these areas that they are used to seeing, like San Francisco, it is huge.”

For those interested in participating in the project in their own community, safety is paramount — Berry advised to make sure to stay away from areas that are too risky to walk or where waves are dangerously high. She also recommended that participants be aware of delicate species that could be in the area, since during high tide events animals will often be seeking shelter themselves. Interested community members can also attend local city council meetings or coastal plan meetings and advocate for action on sea level rise in their community.

The photos taken through citizen science projects like the King Tide Project are invaluable to researchers and policy makers. “It serves as a living record of change,” Berry said.