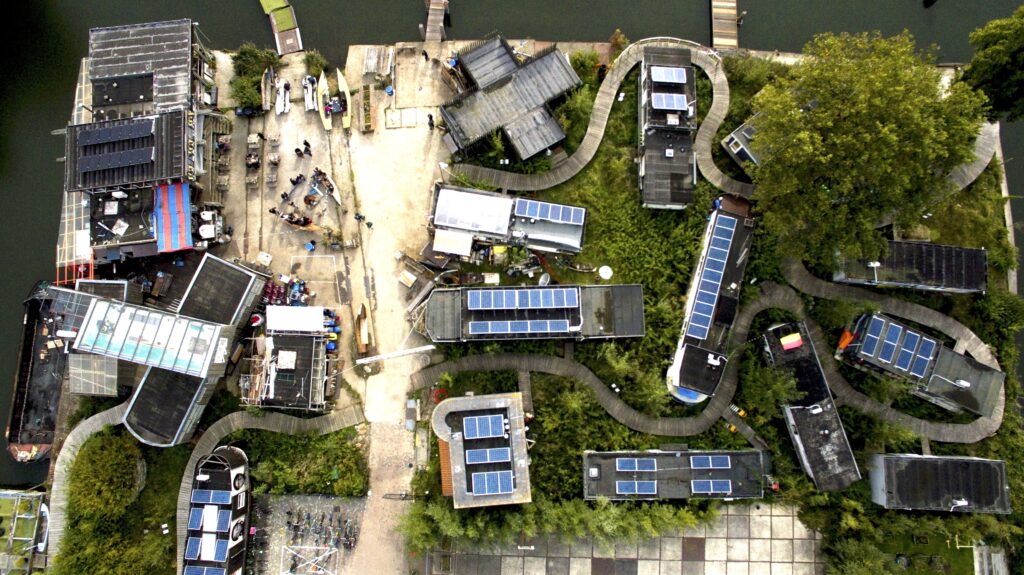 Architecture. It surrounds us, defines our daily lives, and affects how we live on Planet Earth — but when we see it in the news, it’s usually about celebrity architects and their grand designs for museums, villas, and other eye-catching buildings.

What if we told you that there’s another way to create the spaces we live in — one that’s been practiced for centuries. One that’s social, collaborative, affordable, and entirely more sustainable.

Welcome to the world of “Do-It-Together” architecture.

For millennia, people built their own homes, barns, workshops, and communal spaces. They used local, natural materials and time-tested building techniques, and most importantly, they engaged their family and neighbors in the process.

Professional architecture brought advanced design and materials into the game. This gave the world design, planning, engineering, and construction experts, but it also distanced everyday folks from the process of making houses, neighborhoods, and cities together.

Doing it together — by connecting self-built communities and professionals that otherwise would not meet — is a game changer that reverses the role of producers (professional) and consumers (laypeople), putting local needs and solutions at the center of the building process.

And it’s more than just a neat idea. Do-It-Together architecture is already an active practice around the world. Here are eight examples of exactly how it works, and what it looks like.

Made possible through crowdfunding, the donated efforts of a local engineering firm, and more than 60 local and international volunteers, the ModSkool project first took root in 2016 in the slums of Chilla Khadar in New Delhi.

The project was a finalist in A–D’s 2016 Buildify Global Challenge, and it took just three weeks to build in 2017. Most of the design decisions were made in real time, on site, through collaboration between local architects and community members.

The school’s modular structures can be built up or broken down quickly by screwing locally available bamboo together with metal joints. Each classroom has retractable wooden panels with locally made thatch as walls and windows, and insulated roofs of corrugated sheet metal with thatch and thick canvas. It is designed to make summer heat more bearable, stay warm in winter, and keep out rain and mosquitoes during the monsoon season.

After a land dispute, the school simply moved to a new territory in 2019, and upgraded from wooden to woven fiber panels that are commonly used in traditional charpoy day beds. Building on this success, Social Design Collaborative was established to continue working with communities and making their needs visible to local government and the broader public.

The Parisian suburb of Colombes struggled with high unemployment in the early ‘00s. Then the research-design collective AAA launched the R-Urban project to transform an unused “interstitial” space into a self-sufficient community by training locals in urban agriculture, co-housing, and other types of self-managed placemaking.

This strategy was well received by the city government, which partnered with other local organizations to make the project a reality. As opposed to a top-down bureaucratic planning process, R-Urban was initiated by a cooperative team focused on three pilot cases: AgroCité (urban agriculture and pedagogy), RecycLab (recycling, eco-construction), and EcoHab (cooperative housing).

Although the original location at Colombes was returned to the municipality, R-Urban has relocated and expanded to other two locations. In Gennevilliers, the new AgroCité was built with reclaimed materials from the original building in Colombes by former and new users. In Bagneux, a second new AgroCité was launched in 2019 with the mayor, local officials, residents, and students coming together to exchange ideas and discuss strategies to develop a more resilient urban community.

The Lim’uphile agricultural cooperative is located on a former brownfield on the western edge of the Walmer township in Cape Town. Founded by a local resident, Xolani Siwa, the co-op trains local youth in organizing events and growing vegetables. It was built collaboratively after Siwa met in 2018 with architects from the French design group Collectif Saga, which assisted with the design and construction of the new facilities, including a training hall, plant nursery, shop, kitchen, and a washroom block.

The construction process started with materials found onsite, and was open to young co-op members, job seekers, local folks, and international volunteers. They transformed a 27-meter greenhouse made of reclaimed materials into the nursery and hall. The work group also covered a shipping container with carpet squares, and built a wood-frame extension to accommodate the shop and kitchen. The work environment was collaborative, and the construction process became part of the youth-training program.

4. El Tr3bol, Colombia: Skate park for the people, by the people!

The Ciudad de Cali neighborhood of Bogotá, Colombia, has a history of community struggles, and it was a 2014 community action in a derelict local building that ultimately led to the creation of the thriving community center known as El Tr3bol.

Initially, community members began using the ruined structure for graffiti, community art, and a variety of DIY reconstruction efforts. This process evolved following a participatory-design process between community members and the Arquitectura Expandida collective, which produced both a new name for the building, and its mission. “Tr3bol” means “clever,” and the numeral 3 indicates a trifecta of community interests — a skate park, community garden and an event hall.

As a physical space, El Tr3bol is open in design, and offers meeting places for workshops, talks, screenings, and exhibitions.

The centerpiece of this rehabilitation is the event hall, which extends the structure using guadua bamboo and other commonly-used materials. The walls of open bamboo panels, with patterns inspired by the local environment, filter the daylight and direct visitors to El Tr3bol’s entrance.

Although El Tr3bol has thrived throughout the COVID-19 pandemic as a community hub, the space is now threatened with demolition. Advocacy efforts to stop demolition have held so far.

A devastating earthquake struck Chamanga, Ecuador, in April 2016, severely damaging 80 percent of the buildings there, and exacerbating widespread social inequalities and poverty.

Among the architectural casualties was a music, poetry, and dance center serving young people from the local Afro-Ecuadorian and Montubio (mixed-ethnicity indigenous) communities. Why not rebuild it?

All it took was the support of community members, the cultural center’s nonprofit parent Opción Más, community organizers, architects from Atarraya Taller, and collaboration with an array of international academic institutions, including the University of Tokyo, Portland State University, and the Munich University of Applied Sciences.

The design process connected students, community members, and professionals resulting in a pair of parallel spaces within a larger atrium that can be opened to the public during events. The first floor is built with bricks and reinforced concrete to withstand future earthquakes; the second floor is framed in local bamboo and wood, keeping the space naturally lit and ventilated. Recycled Tetra Pak sheets were used for the roofing, improving the acoustics and providing insulation. The building also uses tanks to harvest rainwater, and provides dry toilet systems.

The Granby Four Streets are a cluster of terraced houses in Toxteth, Liverpool, that were built around 1900 and fell into decline. After several decades of unsuccessful top-down efforts to regenerate the area, it was a bottom-up approach that made the difference.

Local residents started guerrilla gardening, cleaning their streets, painting empty houses, and organizing monthly markets. In 2011, residents formed a community land trust, attracted funding, and teamed up with the architecture collective Assemble. Their ongoing efforts include the Granby Winter Garden, which was converted from derelict terraced houses and is now an indoor garden, freely accessible to local residents and the wider neighborhood. The project also includes a local architectural ceramics company, Granby Workshop, which was launched as part of the 2015 Turner Prize.

De Ceuvel, a cleantech playground in Amsterdam-Noord, emerged in 2014 with a limited budget and a lot of sustainable vision. The team behind the project secured a 10-year land lease on a former industrial site, and ultimately created ten workspaces and a research lab with a focus on sustainable development. The long-term vision is to transform the brownfield into a regenerated urban oasis.

The project got started when local creatives, social entrepreneurs, researchers, and architects from Space & Matter joined forces as volunteer builders and future users. They teamed up with boat experts to convert reclaimed houseboats into their future workspaces; they also constructed a timber boardwalk that winds around the houseboats, lifting the users and visitors off polluted ground, and introduced a phytoremediation process using plants to clean up contaminated soil and water. Ten years on, de Ceuvel remains one of the best test cases of circular, sustainable design in the Netherlands and worldwide.

8. Lantian, China: Getting around to a tulou revolution

The tulous of China’s Hakka culture – a classic example of vernacular architecture — date back at least a thousand years. These large, earthen roundhouses arrange individual dwellings in a circle around a central, shared courtyard, and have provided shelter and defense for extended families of up to 800 people.

Today, locals in the Fujian province still live in their ancient tulous when they can, but all too often abandon the historic structures in favor of modern condos with indoor plumbing.

The project is meant to inspire locals to imagine and reconfigure tulous to collective use, rather than consign them to the dustbin of history.

About the author’s organization:

Architecture-in-Development is a global platform connecting 60,000+ architectural professionals to self-built communities so that they can collaborate on sustainable projects that otherwise would not have been realized. We organize periodic Global Challenge programs to advocate and facilitate this new practice, which we call Do-It-Together (DIT) architecture.

Now entering its 10th anniversary, Architecture-in-Development has rebranded as A–D with a revamped website. The new website hosts A–D’s Global Challenge program, features the most inspiring DIT architecture cases, and helps match needs with offers in this new practice. Join our network as an expert or help spread the word.