Well-designed affordable housing is not an oxymoron. To the contrary, the best social housing being designed and built today features a combination of creative social programming, cutting-edge sustainability strategies, and a keen aesthetic awareness to rival anything available on the private market. We've collected eleven of the most innovative examples of recent affordable housing projects from around the globe, from a repurposed soap factory in Brussels to a sand-bag based modern home for former shack dwellers in South Africa.

Well-designed affordable housing is not an oxymoron. To the contrary, the best social housing being designed and built today features a combination of creative social programming, cutting-edge sustainability strategies, and a keen aesthetic awareness to rival anything available on the private market. We've collected eleven of the most innovative examples of recent affordable housing projects from around the globe, from a repurposed soap factory in Brussels to a sand-bag-based modern home for former shack dwellers in South Africa.

Local firm MDW Architecture converted a Brussels soap factory into an eco-friendly development of 42 units, including apartments, lofts, duplexes, Maisonettes, and a daycare center. The urban infill project involved the renovation of two existing structures, which were supplemented by four new buildings. All of the buildings includes sustainability features such as natural insulation, solar panels for hot water, and rainwater harvesting for toilets. In addition, one of the renovated buildings meets the passive very-low-energy requirements of the IBGE, the Brussels energy agency. The creatively landscaped campus incorporates a number of remnants from its industrial heyday, like a smokestack (now used to ventilate an underground garage) and steel beams from a demolished factory building. 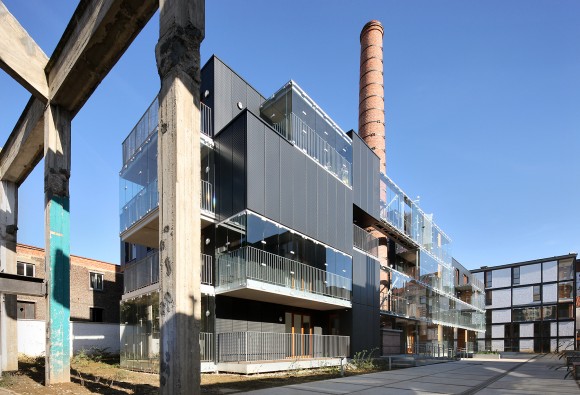 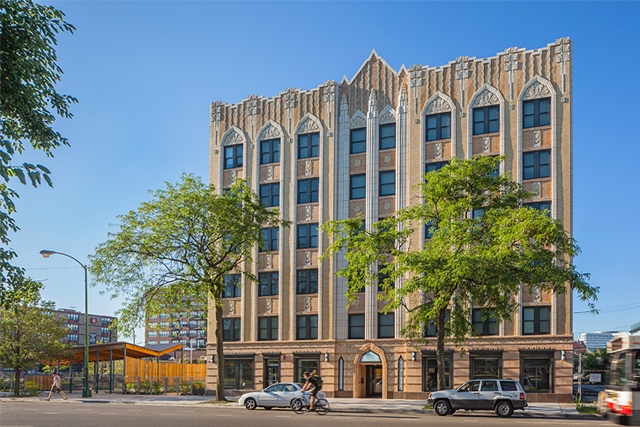 Roldán + Berengué's 75-unit apartment tower is located on the outer ring of a new mixed-use development comprising 26 buildings designed by different architects. The Barcelona firm designed the block to be built using 100% recyclable materials. In addition, at least 65% of the materials used in the facade are recycled. The three-dimensional envelope breaks down the scale of the building by grouping floors into sets of three, in deference to the complex's medium-rise surroundings. 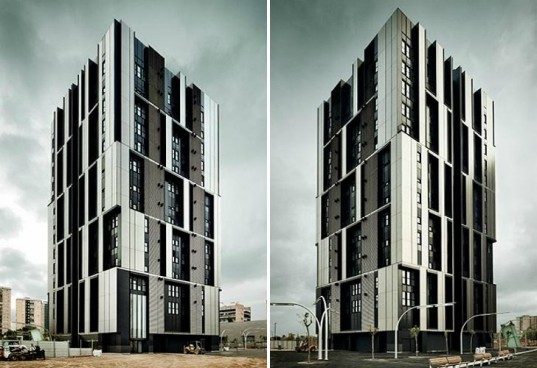 The zigzag facade of this social housing complex, designed by local firm OFIS architects, suggested its name, a nod to the classic 1980s computer game. The four-story building sits on the edge of a market-rate apartment community developed several years earlier. Because the building faces a major highway, the architects tilted the balconies and apartment openings 30 degrees. This also eliminates direct lines of sight to and from the building opposite. Only the shell of each apartment is structural, so that interior walls may be rearranged according to occupants' needs. 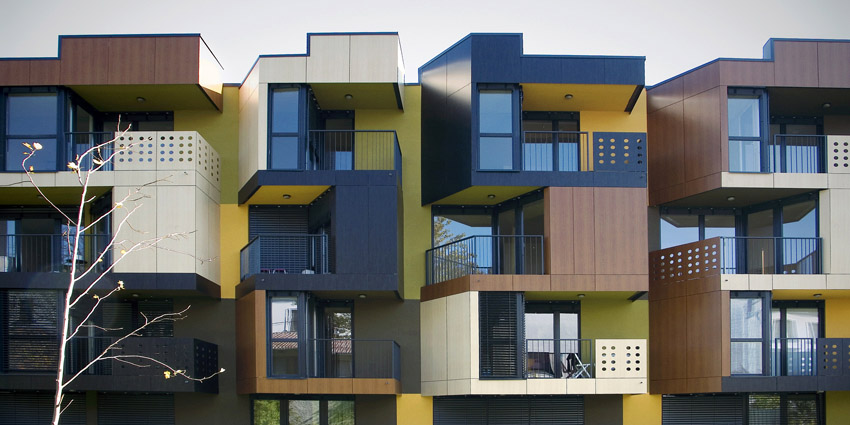 Chilean firm ELEMENTAL's porous 70-unit development in a middle-class neighborhood in Santa Catarina was designed with expansion in mind. The continuous three-story structure contains a series of ground-floor "casas" topped by two-level apartments. Both the casas and apartments begin with 40 square meters of space. By expanding horizontally, residents may grow their total area to 58.75 and 76.60 square meters, respectively. The already-built portions of the complex include all critical infrastructure, like bathrooms, kitchens, and stairs. 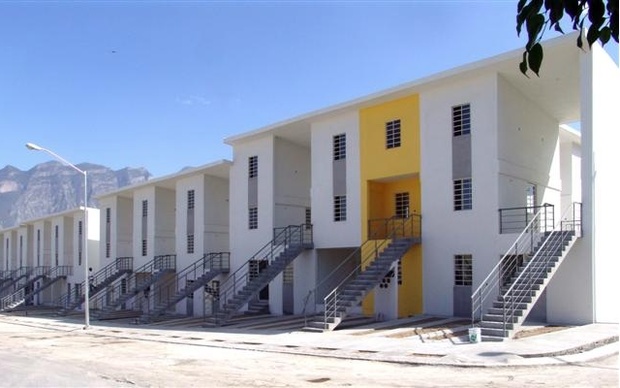 Built on the edge of Nijmegen as part of an urban renewal operation, Rotterdam firm 24H architecture's 72-unit Housing Hatert tower was nicknamed "the White Rose" for its undulating balconies, which are non-aligned for maximum daylighting. Parking is accommodated under a raised deck that forms a public plaza, and a community health center is located on the building's ground floor. 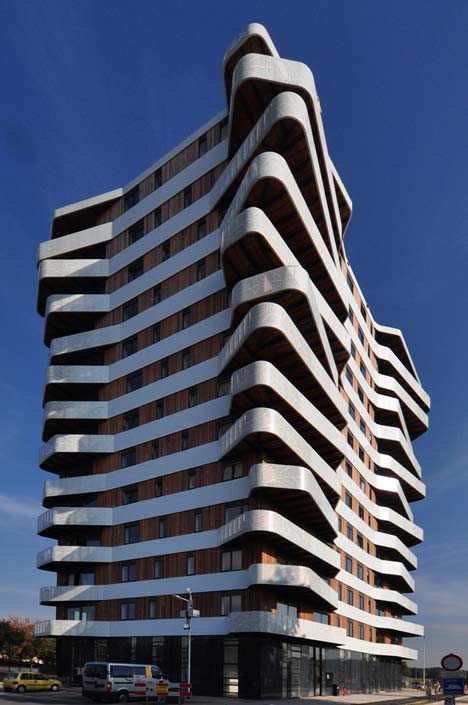 Santiago architects Undurraga Devés Arquitectos built 25 dwellings for members of a native Mapuche community in Huechuraba within a larger development of conventional social housing. The design of the Ruca Dwellings was informed by the traditional Mapuche housing typology, temporary structures of tree trunks and branches. Through a dialogue with members of the community and the sponsoring organizations, the architects developed a brick and reinforced concrete frame structure with pine wood embedded on two sides for bracing. The facades are covered in coligüe cane. The houses are sited to face east, per Mapuche tradition, and feature large kitchens, a reference to the importance of fire in Mapuche culture. 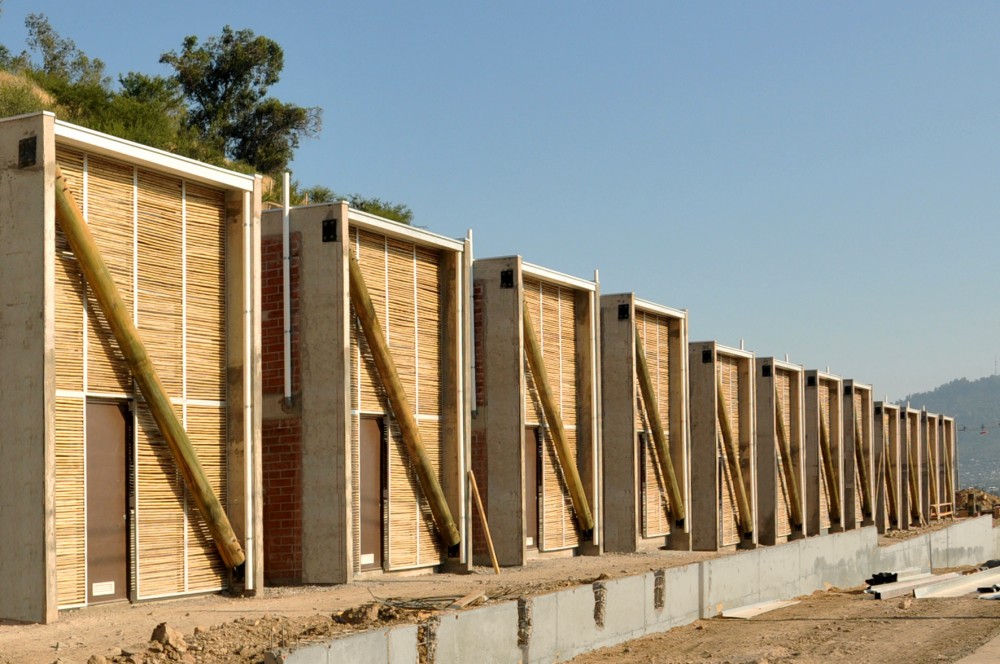 Designed by San Francisco firm David Baker Architects, Tassafaronga Village is a 7.5 acre development comprising townhouses, apartments, pocket parks, and open spaces including a central plaza known as the Village Square. The complex, which includes 60 apartments in a new three-story structure, 77 units in town homes, 20 lofts in a converted pasta factory, and 22 apartments built by Habitat for Humanity, was constructed on a brownfield site owned by the United States government during World War II. The project was one of the first in the country to earn Gold LEED-ND plan certification, and all buildings are certified LEED for Homes Platinum. Eco-friendly features include solar-heated water, photovoltaics on some buildings, and native and drought-tolerant plantings. 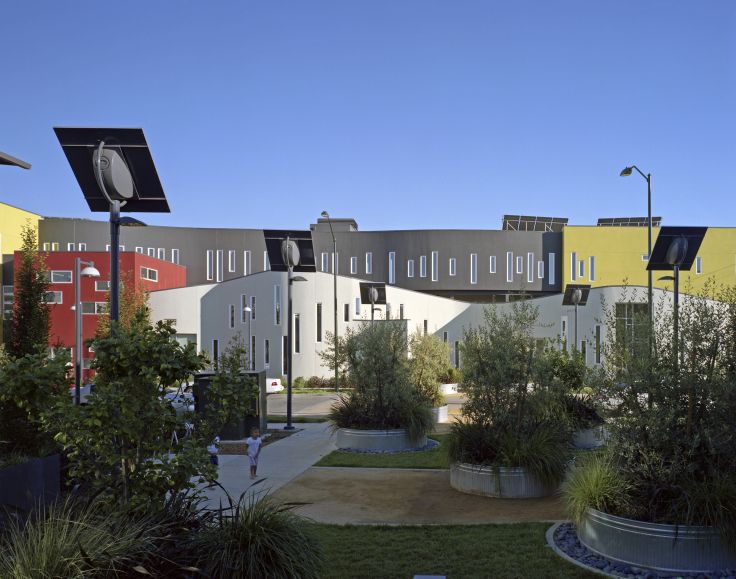 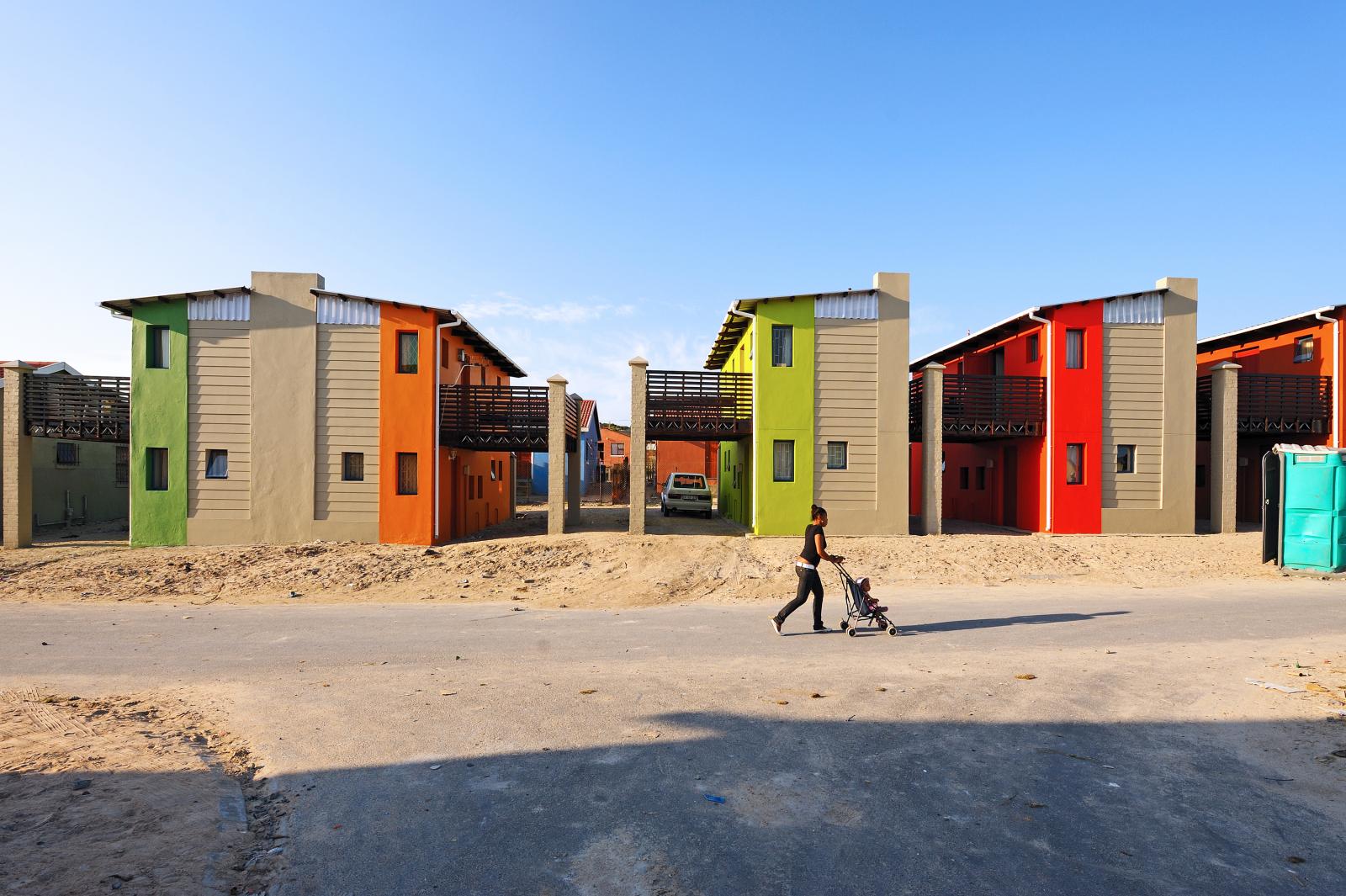 Local firm TETRARC grouped 39 social housing units into 11 townhouses in Nantes. To save space on the interior, the architects designed an external stair system encased in a basket weave of wooden louvres. At the front of each apartment is a multi-purpose indoor-outdoor space enclosed in glass. Each apartment also comes with a private garden. 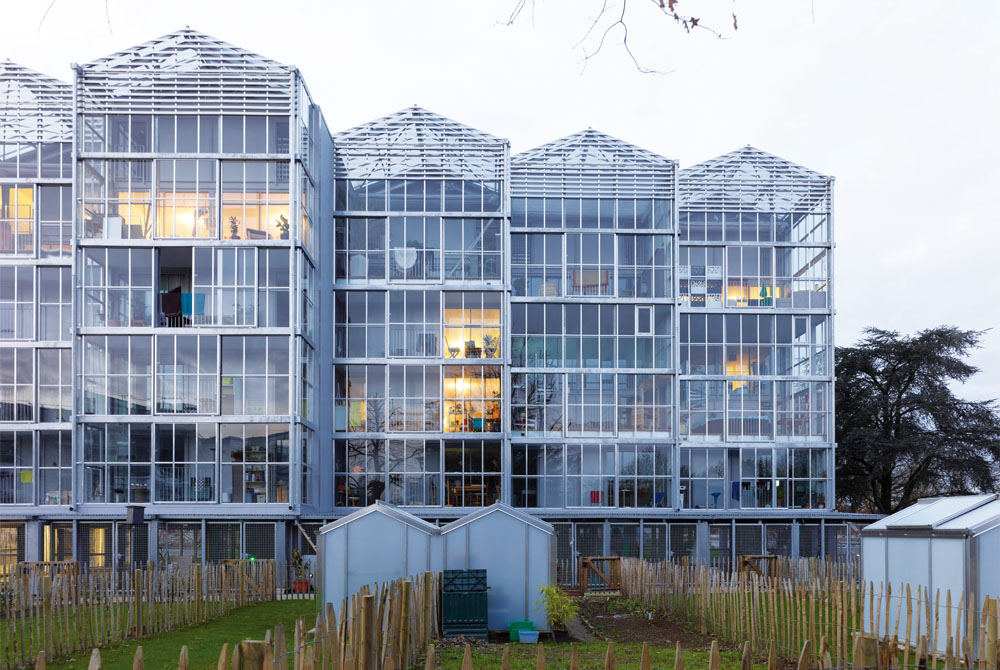 London-based David Adjaye Associates' brand-new Sugar Hill is unique in that it pairs affordable housing with a public program, namely a preschool and a children’s museum. The 13-story, 124-unit building is wrapped in embossed panels of precast concrete. Saw-toothed fenestration around the glazing recalls the bay windows prevalent in neighboring row houses. The building is broken into two volumes, offset at the ninth floor to form a terrace on one side and a cantilever opposite. Additional terraces are located on the second, third, and roof levels. The 17,600 square foot Children’s Museum of Art and Storytelling occupies the basement level of the building, while the early childhood education center, due to open in September, is located on the ground floor. 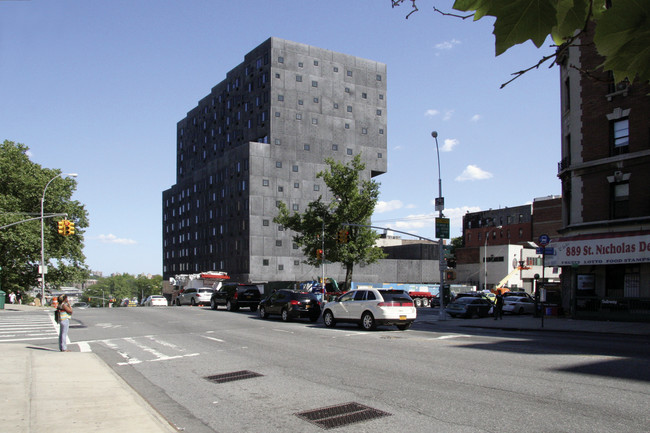 This post is part of Shareable's and San Francisco Public Press' exploration of affordable housing solutions during June and July 2014. Check out the rest of the series here.