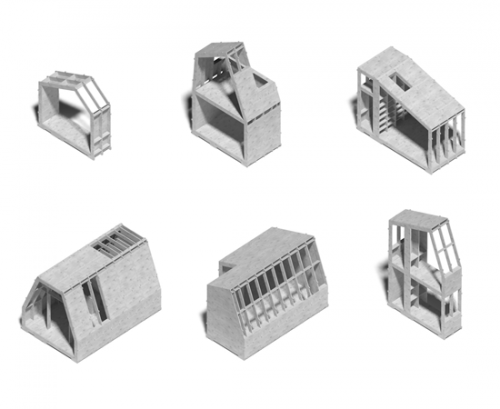 The Open Source hardware and design community is on fire these days. Apart from the projects that eventually already gained worldwide recognition such as Open Source Ecology, DIYDrones, Arduino, and RepRap, many fantastic projects hold great promise.

In the last couple of years, in fact, we have witnessed the emergence of several communities around specific human issues such as construction, transportation, sustainability, fabrication, furniture, and even materials. In this post, we’ll mention 10 amazing projects that have potentially revolutionary impacts and already deliver great opportunities to worldwide makers.

A relevant wave of innovations is coming to the architecture and construction market. The most mature project in this knowledge is probably the one initiated by Alastair Parvin, founder of the Wikihouse Project. Wikihouse was presented during 2012, and went through a constant improvement. In the words of the founder:

Wikihouse project is an Open Source Construction Set, to allow anyone to design, download, and print CNC-milled houses and components, which can be assembled with minimal formal skill or training.

The project, that already shows a great potential, makes us glimpse a lot of potential uses, ranging from pop-up, post-crisis hospitality to redefining construction for long-term sustainability and resilience. As the project is currently rasing funds on its website, you’re encouraged to contribute to the three goals currently set: a sketchup plugin to allow an easier design process, a full house prototype for the platform, and an improved community sharing website.

Wikihouse is not the only open source architectural related project: Despite being less glossy and design minded, Domeorama is an outstanding community sharing site where tens of dome designs and junctions are featured in open source. The website contains an impressive number of resources ranging from calculators to fabrication instructions, materials, software. Impressive stuff.

If not enough, just look at this page now – a lot of parametric configurators are available for YOU to design your own furniture, with parametric exploration applets. As some of you may know, in a talk I recently gave at the Barcelona Design Thinking Week, I tried to focus on this precise issue: that of the transformation of the role of the designer, increasingly becoming the one that designs the process that will allow the user herself to become a final product designer.

To our amusement and excitement the innovation pace in the Open Source Design community is so high that we have still a couple of incredible projects to mention. The first one, Open Desk initiative, was recently launched. The project dubs itself to be “about local making” and effectively wants to be a platform to publish open source furniture designs that can be made locally.

All the OpenDesk designs are available as digital downloads. These digital files are fed into a CNC machine, which produces raw-sown pieces of wood. These are finished by hand, a process that can involve oiling, sanding, polishing, and small parts. The finished pieces can then be assembled by hand on location. I wasn’t surprised much to find out that the AtFab collection itself was recently added to the OpenDesk collection and it’s now available on the platform.

Among other partners, the Opendesk initiative was facilitated by FabHub – the global network of fabricators – that now apparently supports Wikihouse, as well. Apparently, Fab Hub, OpenDesk, and Wikihouse are, at least partially, all expressions of the 00:/ strategy and design practice that seems fated to leave a huge footprint in the history of open design and architecture. 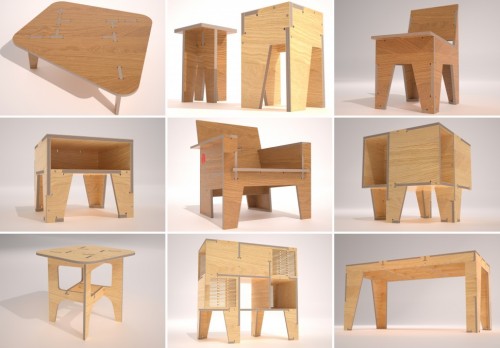 These projects, also remind me of the italian Slowd.it or Maker’s Row projects that are similarly seeking to create a distributed and integrated network of labs capable of providng the several different material threatments and processing capabilities needed to design complex pieces of furniture or other design products. Even houses.

Another interesting project is that of Sketchair:

SketchChair is a free, open-source software tool that allows anyone to easily design and build their own digitally fabricated furniture.

In a very similar perspective to that of the AtFab applets, Sketchair is exploring the disappearing limitation between professional, amateur and even improvised designers. Click on the download page, choose your operating system, and then get crazy designing your own chair and table and sharing the design with the others.

Let’s now put the open source furniture design aside for a while and turn our look to the sea or, better, under the sea. Many of you might already know OpenRov, the project that was born to build the first open source submarine rover. The project got some incredible visibility in the last few months, especially when the founder, Eric Stackpole, was featured in a super nice Make cover with a smiling face. 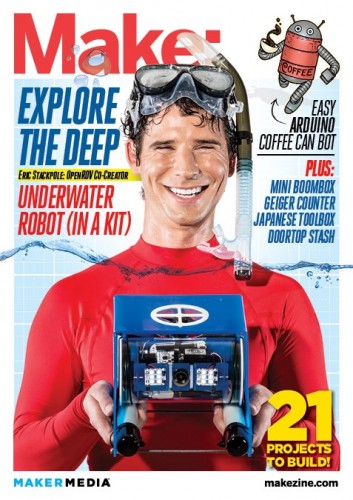 Despite the funny stuff, OpenROV is an amazing project that allows you to build a submarine rover and explore the underwater world for less than one thousand dollars, radically democratizing access to marine research and exploration doing so. We can in fact expect the community to provide new complementary extensions and applications according to the use cases that academics or simple citizen will accomplish with the help of the artifact.

Another impressive project is that founded by Cesar Harada: Protei. According to its website, Protei is:

Shape Shifting, Open Hardware, Sailing robot to sense and clean the oceans […] a platform technology to transport scientific payload and clean-up equipment at sea, developed by an global community of scientists, engineers, makers, and sailors.

A recent post on the TED blog, celebrated the oceanic trip (circumnavigating the globe) that Cesar completed thanks to the Unreasonable at the Sea initiative. This initiative actually gave Protei the visibility that the project deserved from the very start. Cesar Harada will be soon interviewed on Open Electronics, so follow us or subscribe to our feed to get informed when the interview will go live. 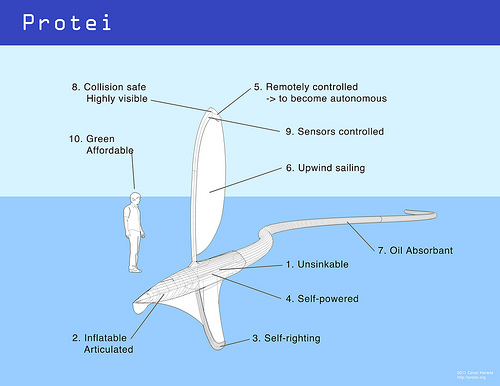 Leaving the sea and shifting our sight to the air for a while, we may notice that the world of UAV (unmanned aerial vehicles) is definitely ramping up in terms of visibility and adoption among hobbyists. While drones are sadly known for warfare-related issues, the drone sector is lively and could easily go toward DIY Drones, the super well-known drone firm founded by the former Wired director and Internet superstar Chris Anderson.

OpenPilot Community can count on a very active forum and an impressive list of Airframes to be used with the open source software platform. If you just want to be a little more ambitious, you can drop the drones and jump on a real open source hardware airplane. Indeed, that’s the mission of Maker Plane, a project that recently started a campaign to raise money on Indiegogo.

…is to create innovative and game-changing aircraft, avionics, and related systems and the transformational manufacturing processes to build them. As a result of this aim, aircraft can be built with consistent, repeatable, and highly accurate processes which create safer flying at lower cost.

Though this sounds promising, the project seems a bit too ambitious for now, but you know that if the proper community coalesces and the power of open source development gets in the picture, we may have an open source, self-buildable airplane sooner than expected.

Although personal fabrication is a crowded market, the Italian team behind the FABtotum seems to have struck a relevant chord in makers hearts. At the time of writing this post, the Indiegogo campaign started only few days ago already almost doubled the original objective and tells that the guys here could eventually reach a relevant appreciation from the community. 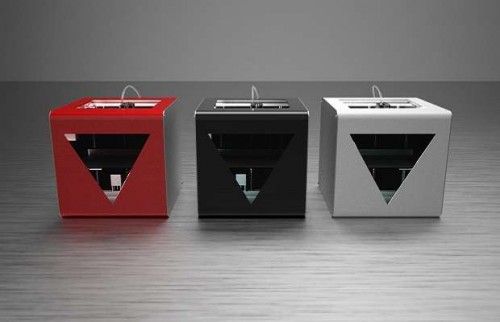 The FABtotum dubs itself as being open source:

FABtotum is going to be open to improvements and suggestions, with easy access to open source software and schematics, and declares that the tool will be released under a Creative Commons Attribution – Noncommercial – Share Alike 3.0 Unported License, a not really proper license for those who want to spur an ecosystem.

In fact, we’re still talking about intent declarations – since the product is still raising funds on Indiegogo and will ship in the spring next year – and the lack of clarity on this particular licensing issue still needs to be clarified once the plan gets more clear. An interview with the FABtotum team has been published recently on Open Electronics; you can see it here.

Though we are now quite used to the application of the open source paradigm to electronics and fabrication machines – thanks to projects like Arduino and RepRap that actually paved the way for the others to come – this paradigm is increasingly gaining traction and adoption in fields that were usually the reign of closed source development and IPR.

Projects like Robohand try to break intro the health business with a powerful vision, that of ultra-customizable, open and hackable prosthetics that every user can tweak and improve by means of a few accessible tools such as a 3D printer, a computer, and others found in any fablab or makerspace. Thinking of particularly complex areas of the world where, due to long-lasting conflicts people – and especially children – are exposed to the threat of landmines, we can imagine how projects like Robohand will eventually be coupled with the emergence and penetration of a number of fablabs and will represent a real possibility to improve one’s life.

Robohand got some serious public visibility in July, when Makerbot decided to support the project and help with communicating it to the masses. The project is well-documented and you can access the BOM and printing instructions on Thingiverse. By the way, the project still has replicability issues and the community is working on it; you’re welcome to contribute if you think you can help to improve the quality of the solution.

The last project I want to mention here is still in it’s infancy: La Paillasse is an open space for DIY biohacking in Paris. It is interesting as it is opening the doors of biohacking to a growing number of people. The overall excitement with regard to the work done by the group led by Thomas Landrain (president) shall grow even more when you think about an incredible project that is slowly taking off and that, hopefully, will hit public visibility soon: the realization of an open source ink produced by bacteria. Yes, you’ve heard well. The guys from La Paillasse engineered a process to synthesize a blue ink that could be used in inkjet printers and that is completely biodegradable and environment friendly. From a blog post on the Lift conference blog:

We are finally really excited by the advancement of a project that makes it possible to brew yourself a blue ink using bacteria. This first of its kind, open-source biological ink is cheap, easy to make, non-toxic, and easily recycled. While we know that ink is one of the most expensive fluids on the planet and a pollutant, this project could be a milestone for the field and it’s coming from a biohackerspace. 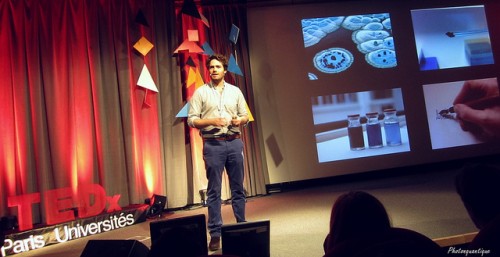 Apparently, the ink project will be soon funded, thanks to a crowdfunding campaign.

What do you think of these amazing projects? Apparently, the open design and manufacturing paradigms are gaining traction and we still don’t know the many applications that the approach could unleash across a variety of industries. Did we forget any important project that was worth mentioning?

Open Source Electronics is the brainchild of a world leader in hobby electronics Futura Group srl.

Open Source Electronics is not just a container of ideas: it is also a web site that is led by a team of engineers and geeks who will take part in the discussions and give support.

Our mission is to become a reference in Open Source Hacking with ideas and feedbacks aimed to enrich the community.