Won't You Be My Neighbor? - Shareable
Skip to content 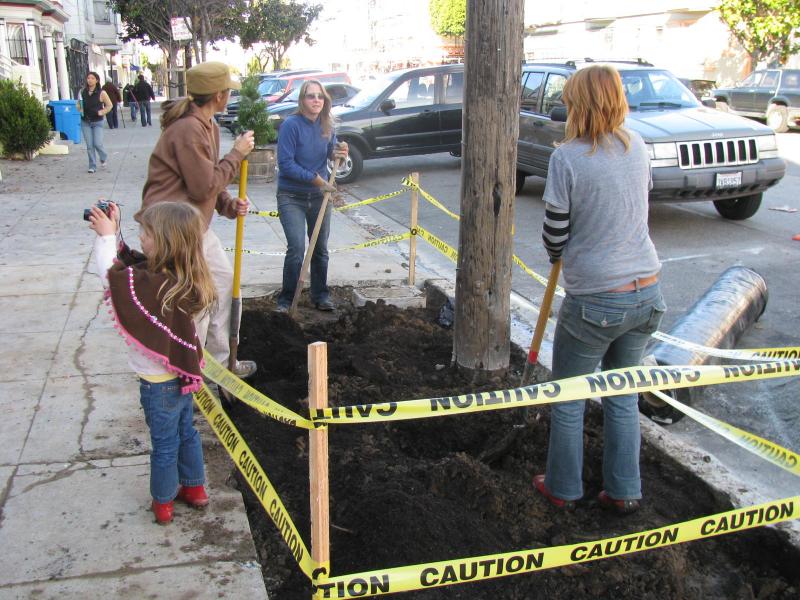 Does your urban tribe have a name? Does it need one?

Shareable.net friend Allison Arieff pointed me to this piece she wrote on the Ainsworth Street Collective in Portland, Oregon:

DO GOOD FENCES REALLY MAKE GOOD NEIGHBORS? Lisa Gambee of Portland and her fellow residents in that city's Cully district don't think so.

Gambee, a marketing and design consultant, is the founder of the Ainsworth Street Collective, a group of more than 50 community-minded individuals and families interested not just in the needs of their northeast Portland neighborhood but also in those of the planet as a whole.

"The neighborhood was in a bit of transition, and there was an odd and wonderful energy starting," says Gambee, describing the happy confluence of events when she moved there with her husband, John, and their now 11-year-old daughter back in 1999. "I mentioned to my friends Markus Stoffel and Abby Mages that we were moving here. It turned out they lived on the same street. Then my sister moved into the neighborhood. Several multi-generational families were moving in. After a while I thought, This is a great group of people with similar interests. Why aren't we doing more stuff together?"

Gambee started the Ainsworth Street Collective (named for the neighborhood's epicenter, Northeast Ainsworth Street) about three years ago, mostly by word of mouth. At a typical monthly gathering at someone's home, there were anywhere from 15 to 50 people, and the main activity was socializing, with 15 to 30 minutes devoted to talking about neighborhood issues big and small.

But from its humble beginnings, the collective quickly grew into something more. Potlucks continue but now members have found other reasons (and excuses) to get together: In 2008, neighbors built a community outdoor earthen oven at "The Barn," a building that will house offices and art studios. Collective member Sarah Case started a wholesale food-purchasing program, buying in bulk in order to reduce packaging and the amount of time and fuel spent going to the store. Smaller groups have spun off from the collective, including ones devoted to knitting, yoga, gardening, and even one whose members gathered to fight pollution emissions from a nearby factory.

This got me to thinking about my own experience with building urban communities. It's quite common, I think, for neighbors to band to together and organize community-building enterprises, though it is quite rare for the people involved to call themselves a "collective" and create an organizational umbrella, as the folks on Northeast Ainsworth Street did.

I once wrote a piece for Greater Good magazine about how my circle of families came together in our San Francisco neighborhood, Noe Valley — a process that has resulted in numerous shareable spinoffs. Our urban tribe went on to form a cooperative preschool and, as Olivia Boler describes in today's edition of Shareable.net, a neighborhood group designed to connect our kids to nature, among other projects.

As I think is revealed in both Olivia's article and my own, these activities enriched all our families' lives in countless ways. Should we now organize ourselves into a "Noe Valley Collective"? Allison's piece on the Ainsworth Street Collective persuades me that we should consider it–and you might consider it as well. The main value, it seems to me, is the name helps folks to focus their attention and brainstorm new ways to build community. As Allison writes:

It's been extremely helpful to residents like Case. "The collective has given me a chance to know the people I live in proximity to, and feel like I have something to contribute and something to learn or gain through those relationships. I feel a sense of connectedness to the place where I live, and I really value that."

Gambee wholeheartedly agrees. "Communities used to have a tight radius. We need to go back to that. Really, we are going back in time to go forward in effort. We're building a sort of micro economy here."

The Ainsworth Street Collective is looking for ways to expand. Projects on the horizon include a tool library, a car-share program, and a neighborhood farmers' market that would sell food the residents had grown or made themselves. But it's not all business: During a winter snowstorm, one neighbor organized an impromptu group of carolers; another had a Christmas-wreath-making party.

All this togetherness is infectious, and it's no surprise that residents from other neighborhoods have expressed a desire to join this dynamic group. But in keeping with the collective's commitment to localism, Gambee urges them to start groups of their own.

Though Case and other members stress that the group wouldn't exist without Gambee's tireless efforts, she refuses to take too much credit. "People get paralyzed when they start thinking about global issues. It's overwhelming. A collective helps bring it to a more human level. I may not be able to save the world, but I can change my neighborhood. That much I can handle."

How to turn your neighborhood into a community

How does your urban tribe organize itself? Do you see any value of giving yourself a name and an organizational umbrella?