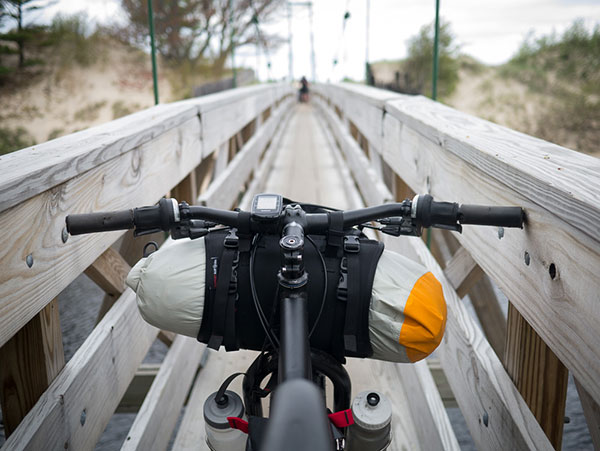 If you’re at all interested in adventuring on two wheels, you’ve probably run across the term “bikepacking.” This is exactly what it sounds like: a self-supported camping trip in a natural setting, but using a bike as transportation instead of walking. The big advantage over backpacking is that, just like on city streets, you can get farther and see more on two wheels than you can on two feet. Remote areas that would be all but inaccessible to a backpacker can be reached much more easily by bike. And even if you’re not up for a grand long-distance journey, you can still discover hidden gems during a simple overnight trip. Bikepacking lets you escape civilization faster and have more fun doing it.

So what’s the difference between bikepacking and traditional bike touring? Think backcountry access. A typical touring bike is a more sturdy road bike, with fairly skinny, smooth tires and drop (or “curly”) handlebars, generally made for pavement. For bikepacking, you want to be able to travel on unpaved surfaces — gravel or dirt roads, and possibly even mountain bike trails with mud and rocks. For this, you need a bike with wider tires that have some tread, and a rider position that keeps you stable over the rough stuff. There are a lot of bike options nowadays that will fit the bill, ranging from “gravel” or mixed-surface touring bikes that still have drop bars but can fit wider tires, to cross-country mountain bikes with front and rear suspension. The idea is to open up your access to all kinds of roads and trails that lead to secluded, and often beautiful, places to camp.

The other main difference is in how you carry your load. Traditional bike tourists use racks with front and rear panniers that have room for everything but the kitchen sink. It’s relatively easy to travel in comfort this way, but that comfort has a weight penalty that can make the bike unruly on rough roads.

For bikepacking, think light and simple. Typical bikepackers use bags without racks that fit into the frame, strapped to the handlebars, and under the seat. This configuration keeps the weight low and narrow to better balance on uneven surfaces. It also means that you’ll have to pare down the equipment you bring, for instance using a bivvy sack instead of a full tent, and a light camping stove instead of the big one that lets you make flapjacks in the morning. It’s an exercise in minimalism that is often good for removing clutter from the experience. 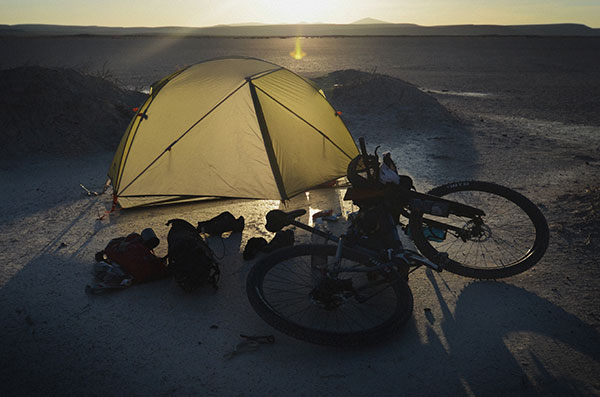 Where to go? There are a ton of options. To start out with an easier experience, rail-trails provide a relatively level and smoother pathway that is likely to have amenities along the way. The Great Allegheny Passage and the C&O Canal Towpath (together known as the COGAP), stretching from Pittsburgh to Washington, D.C., is a great rail-trail option that features a multitude of scenic stops along its 335 miles, plus convenient transportation at either end by rail or air. The Rails-to-Trails Conservancy has information on many more such routes.

Perhaps the granddaddy of all bikepacking routes is the Great Divide Mountain Bike Route, stretching 2,745 miles from Banff, Alberta, Canada, to Antelope Wells, New Mexico, and encompassing all kinds of surfaces and weather conditions — plus spectacular scenery. Searching out state and national parks is another good way to find likely areas. (But, keep in mind, you’ll have to avoid riding on those trails designated for hikers only.) The Adventure Cycling Association is a great resource for (waterproof!) maps, including the Great Divide Route and a newly designated off-road loop, the Idaho Hot Springs Mountain Bike Route.

To delve further into the exciting possibilities of bikepacking, check out Bikepacking.net. As always, your local bike shops are a great place to start for advice on gear and strategy, and maybe even to find other people in your area who want to set out for the first time. It’s not a bad idea to go with someone who can show you the ropes. Good luck!

PeopleForBikes is the leading movement to improve bicycling in the U.S. By collaborating with millions of individual riders, businesses, community leaders, and elected officials, we’re uniting Americans to boost bicycling

PeopleForBikes is the leading movement to improve bicycling in the U.S. By collaborating with millions of individual riders, businesses, community leaders, and elected officials, we’re uniting Americans to boost bicycling on a national level for results that can be seen locally.

Our goal is to make every bike ride better, whether that ride takes you on trails, down to the grocery store, or all the way across town. Why? Because when people ride bikes, great things happen for our bodies and our minds, and our communities and our nation.­­

So who are we?

We are casual riders, weekend warriors, and commuters.

We are parents and grandparents, neighbors and friends. We are business owners and industry leaders.

We are people who enjoy riding bikes, just like you.