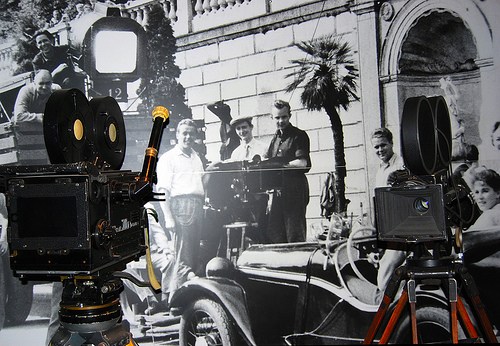 This is the second story in Mary Robinette Kowal's typewriter triptych. The first is "A Type of Favor."

Harold pressed his hand against his knee to stop it from jiggling. It gave him a chance to wipe the sweat off his palm, too. Never show fear in front of actors. "I thought we had the camera until Friday."

Conversation around the sound stage had silenced. The cast and crew of Last Dime had all rotated like some automaton the moment the man in front of him had pushed onto the set. Most of them were dressed like laborers from the 1930s, with torn trousers and battered hats. If you ignored the lights and the crew in modern dress, it could be a labor meeting during the Great Depression — not a happy labor meeting at the moment.

Lex stood with his hands deep in his pockets and his shoulders hunched as if their gazes were a physical weight. "The contract does say that I can claim my gear at any time." Sure, that was standard — the original owner always had dibs on any item put into the borrowing pool — but that didn't mean that anyone actually invoked that clause. Harold glanced at his Assistant Director who stood with red mounting to her cheeks. She gave him a tight nod to confirm that Lex was within his rights.

Harold knotted his hands in his hair. "This totally screws my production schedule."

"It's only one day short out of a three-week borrowing term."

"With two days notice! How am I supposed to fit a full day of shooting into two days?"

A series of exclamations burst from around the set, mostly from crew members. What galled Harold was that Lex had to know how badly he was screwing the film. It wasn't possible to be a member of the Broadway collective without having some understanding of the business, even if you were still just an PA. Maybe especially then. Making films meant running a tight budget so you didn't waste anyone's time or accrue favor credits. The more careful you were with the resources, the better return for everyone when the Practical Thank Yous and ad revenue started coming in. Not that you could count on PTYs or ads when you were budgeting initially.

"Why do you need the camera back on Friday?"

"I have a gig." He stared straight at the camera as he said it, not meeting Harold's gaze. Liar. No one in the co-op would ask to borrow a camera that was already checked out to someone else.

From the middle of the set, Chance Hendrix asked, "Who's it with?"

Harold wanted to wave him off, but the actor just rested his hand on the typewriter in front of him and smiled lazily. Lex turned and seemed to recognize for the first time that maybe this wasn't just some student project. He didn't need to know that Chance was doing this as a favor to Harold's mother. The mere presence of one of the biggest stars to come out of the co-op system turned this into an entirely different type of production. 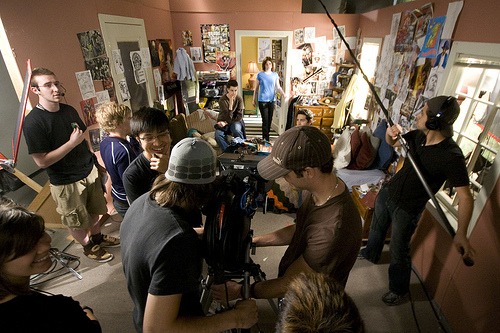 "Does it matter who?" Lex licked his lips and his gaze darted around the set and the cast.

Harold noticed that they all seemed to have taken a step closer. The woman who had loaned him the typewriter weighed a spare platen in her hands. Jenn smacked it against her palm with a meaty slap.

Buoyed by the support of his team, Harold smiled. He could afford to try reason first. "Sure. If there's a chance that it's someone in our sharing circle then maybe we can exchange favor credits and get them to postpone their start date until Saturday."

The lender looked shaken at that for some reason. Harold pursed his lips trying to figure it out. Why would contacting the gig cause him to look worried? For that matter, why hadn't he offered that option in the first place?

For a moment, Harold couldn't believe what he was hearing. An outside company? Sure, everyone worked outside at some point, but the co-op always came first. That was sort of the point of living in one. "You're screwing someone in the co-operative for money?"

"How do you think I afforded the camera in the first place?" Lex's chin came up. "You think you can get a T-40 with favor points? I had to work my ass off to get that. I waited tables. So don't you go getting all high and mighty because you were born here and never had to work to make ends meet. You got no idea what it's like outside the co-op."

"And you clearly don't have understand what it's like inside." Harold waved around them at the men and women watching. He caught sight of Chance Hendrix and a line from the script came to his mind. Sure, it was written about a situation in the 1930s, but it said every thing he felt. "Everyone is here because they believe in a common vision of the future. By pooling our resources and our talents, we can create things that no individual can, but it depends on trust." He pulled himself to his full height and glared down his nose in his best Chance Hendrix impression. "If you break trust with us, who then will trust you later when you are in need?"

"Are you threatening me?"

"He's not." From the side of the sound-stage, the typewriter lady stepped forward. "He's explaining how things are. It's hard to get, I know, but working with the group makes a difference in being happy here. If he were threatening you, he'd point out how badly it'll cut into your rating if he wrote a review explaining what happened. But it wouldn't be just him, either. It might be me, maybe the cameraman, the DP… perhaps the whole crew would explain how you yanked the camera from someone because a better offer came in. I'll let you picture how trustworthy that will make you seem. How many lending and favor credits do you think you can rack up if no one trusts you?"

Harold almost felt sorry for Lex. Under the combined force of the group's focused glares, he seemed to crumple. "I already told them yes. What am I going to do?"

"I would really appreciate it if you would tell them you were mistaken."

Lex was shaking his head. "Dude, I need the money."

It was hard for Harold to wrap his head around. The co-op covered meals and housing. You could access credits based on your favor point balance if you really needed something that the co-op couldn't supply. But someone in either your lending circle or a reciprocal one would have almost anything anyone needed.

Lex must have seen Harold's confusion because he shrugged. "I want to upgrade to a T-57."

Harold winced. The T-57 was a beautiful camera and if Lex were serious, it would be a valuable asset to the co-op. A thought tickled his brain… "How much are you short?"

Running a quick calculation in his head, Harold nodded slowly. He suddenly had a full understanding of all the films in which someone proclaimed that an idea was crazy, but it just might work. He climbed up onto Chance's desk, straddling the typewriter and made a mental note to have the actor do that in the next scene. If they had time. 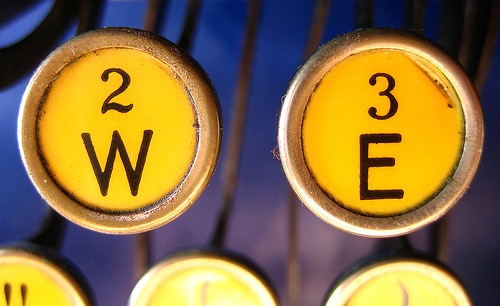 "Ladies and gentlemen, here is my proposal. I believe that Last Dime will improve the co-op's standing and that we will all see increased ad revenue and an uptick in Practical Thank You donations. The PTY's alone should be ample if — and this is where you come in. If we pool our resources and go in on the camera with Lex… If we do that, he has no need of the outside gig and we can finish filming."

Lex stared up at him from the floor. "You'd do that? For me?"

"I'd do that for us." Harold looked at his cast and crew. "It's a win-win. Finish the film and we'll have a better camera in the borrowing pool for next time. Who's with me?"

And then, as they say in theater: The crowd went wild.

This is the second story in the typewriter triptych. Tomorrow: "Playing to Type."