How to Throw a Toy Exchange - Shareable
Skip to content 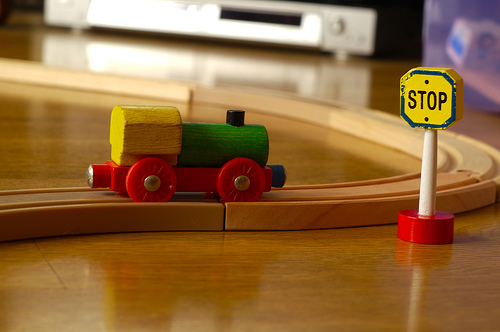 We cleared out our daughter's room this past fall to honor her request that we paint her walls pink—and in the process uncovered about four bags of barely used toys, outgrown clothes, and books that weren't on anyone's favorite list.

We dutifully carted everything off to the thrift store, but it left me wondering how much my son might have waiting to give away in his room, not to mention what might be lurking in the basement.

Soon after a friend of mine mentioned that she was worried because the holidays were going to hit her family hard. Coming off of a year of lay-offs and the resulting financial struggles, finding gifts for the kids was going to be a challenge and she was feeling depressed about it. It got me thinking.

We do a lot of our holiday shopping at the thrift store where deals are to be had; our kids aren't bothered by getting a puzzle in a box fortified with masking tape or a new dress with some other kid's name marked on the label. I figured we weren't the only frugal family out there who wouldn't mind shoring up the holidays with someone else's cast-offs.

On the spur of the moment, I sent out an email inviting friends to a used toy exchange. I know my friends and I know that the siren song of de-cluttering and getting a deal was likely to lure most of them in. The basic details were this:

I chose Thanksgiving weekend in part as an antidote to the Black Friday frenzy. I liked the idea of subverting the consumerism fest by sharing things we already had and socializing while we did it.

The week before the event I sent my kids scrambling to find things to add to our give-away pile. My kids knew which parents were coming to the exchange so the clean-out was fun. My daughter called her aunt up the night before to give her a heads up about a couple of gifts she thought would be perfect for her cousin, and we set those things aside. Knowing that her cousin was going to be the one unwrapping that particular gift Christmas morning gave my daughter a special kind of glee—and also made giving away a once desired toy much easier.

The morning of the toy exchange I made chocolate muffins and brewed coffee. Refreshments always make any kind of social event easier, and since I was inviting people across several social groups, I figured this would help everyone get comfortable. Sure enough, the guests headed straight to the kitchen after depositing their boxes and bins in the family room.

The first few people were tentative about digging through the stuff, but this is where peer pressure comes in handy —everyone wanted to see their toys go to a new home! Pretty soon people were making a game out of finding toys for each other. Anytime someone wondered out loud if they were maybe taking too much the room would chorus "No!" and "Take more!"

As people began to leave (most of them loaded down with toys for their family and for friends who couldn't make the exchange), they made me promise to have the exchange against next year. I promised to make it an annual tradition. Everyone agreed that a give away is about ten times more fun when you get to do it in person.

Once everyone was gone, I surveyed the room—we only had a single large box of toys to take to Goodwill. And me? I not only had cleaner closets and a stronger sense of holiday sprit, I also scored a fabulous bag of finger puppets to add to our collection.

Some tips to pull off a toy exchange:

I have been writing professionally since 1999 and my clips appear in Salon.com (where my essay about my daughterâ€™s adoption was chosen as an Editorâ€™s Pick for 2006 and was

I have been writing professionally since 1999 and my clips appear in Salon.com (where my essay about my daughterâ€™s adoption was chosen as an Editorâ€™s Pick for 2006 and was reprinted in Adoptive Families); Brain Child (my essay â€œYouâ€™re Not the Boss of Meâ€ about non-coercive parenting was reprinted in both Utne and Ode); Parenting, Yoga Journal, Wondertime, Adoptive Families, Bitch: A Feminist Response to Pop Culture and Greater Good. My Salon.com essay also appears as â€œSharing Madisonâ€ in Rebecca Walkerâ€™s anthology One Big Happy Family (Riverhead Press, 2009).