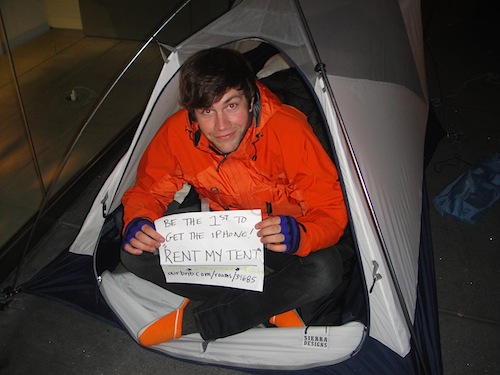 Does: Has been working full-time for a start-up but has recently moved on to get more experience.

The story: On Tuesday, June 22, Chris Bank set up his two-man tent outside San Francisco’s Stockton St. Apple Store. While to many he would have looked like another die-hard Apple fan planning to be the first to buy an iPhone 4G, Chris had plans to rent the second space in his tent, sharing with his guest the privilege of waking up the next morning to be first in line for the iPhone.

Hoping to just cover the costs of his new phone, Chris listed the spare spot in the tent at a reserve price of $200 on Airbnb, a peer-to-peer travel platform. Airbnb began in late 2007 as an idea between two flatmates, Joe Gebbia and Brian Chesky, who rented out their spare space to a few international design conference delegates because every hotel in San Francisco had reached capacity. With Nathan Blecharczyk, they launched a web platform to help locals rent accommodation space to visitors, taking the concept of Couchsurfing to the next level. In just two years, Airbnb has spread to 5,676 cities across 148 countries, listing anything from apartments to houses to castles to treehouses.

For Chris, the option to advertise his tent space on Airbnb was an obvious one. “(Airbnb is) popular in the Valley now,” he says. “It just made sense.” Would this same plan have been possible prior to Airbnb’s entry onto the scene? Chris muses that he could have potentially used Craigslist and social media. “The press really helped get the word out, but Airbnb made it really simple to schedule the tent even though it was an unconventional use of the site.”

And now the $200 question – who would pay to sleep in a tent outside an Apple Store? Enter Joe Sabia, the entrepreneurial co-founder and Creative Director of Whirled Interactive, a company whose tagline is "Don’t be boring." Sabia eventually agreed on a price of $400 for the night in Chris’s tent, and he admits, “the experience was priceless.”

During the two days he spent in line outside the store, Chris also attracted the attention of some kind San Fransiscans who made regular stop-offs to supply him with food of all kinds, from sushi to sandwiches. “A woman bought me a liter of coconut water and a killer salad,” explained Chris, who was astounded by the generosity of complete strangers as he sat in his tent with Joe.

The motivation: Apart from the obvious benefits of being the first to get your hands on the latest iPhone, the other incentives of engaging in what was a very public peer-to-peer rental experience are slightly less tangible. For Chris, he calculated that the key attractions for potential renters of his accommodation would be, “the intrigue of what I was offering and the fame of being number one.”

And it seems that there are no regrets from Joe about being lucky number one – using Airbnb’s guest and host review system, Joe gave his host rave reviews. “Buying Chris' tent on Airbnb for 400 dollars to be the first person in San Francisco to get the iPhone 4 was a great experience. What a fantastic dude.”

What’s it like sharing a tent…with a complete stranger? “We caught up for a little bit but to be honest, I passed out pretty quickly after he bought the space,” Chris admits. “I woke up later to find him sleeping next to me for a very brief amount of time – he was exhausted, too…I also had an agreement with the police that I would take down the tent come 6 am every day.”

A shared future? Despite the fact that Chris’s Airbnb tent-renting campaign is a slight exception to the norm, it does seem to suggest that every day we become more comfortable with the idea of trusting complete strangers to swap and trade the tangible, or buy and sell the intangible. Supported by the infrastructure of organizations like Airbnb, Couchsurfing, Roomorama, and CrashPadder, we’re suddenly free to experiment with the boundaries of what people are prepared to participate in when it comes to sharing travel experiences with others.

It is also unlocking the creativity of hosts in what they can rent and how they create the right experience for their guests. Airbnb helps its members in this area by suggesting tips like providing fresh towels and bedding, stocking the fridge and helping out with travel advice, but the organisation is constantly receiving fantastic stories from guests about hosts who have gone above and beyond expectations – anything from leaving chocolates on pillows to throwing a traditional Russian reception for newly married Russian guests!

As people look more and more for reasonably priced authentic local experiences when they travel, it seems that the future of peer-to-peer travel is only just getting started.