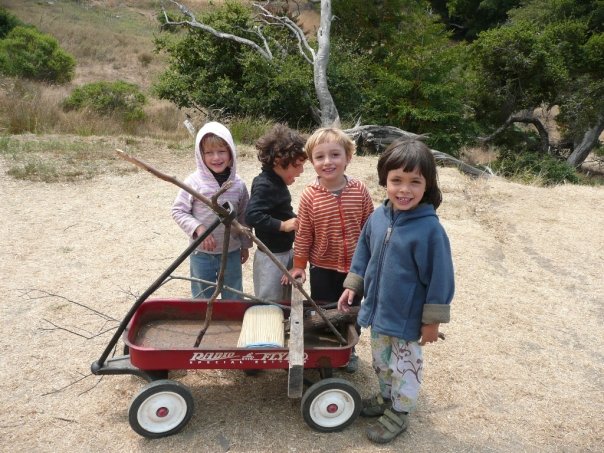 Sure, sharing is caring. Sure, you've carpet-bombed your kid's brain for years with messages about the joys of toy-sharing.

But what do you share? Seriously, dads and moms: How often do you share what you have in your daily life?

Maybe you do it all the time, but I have to make myself share. I'll tell you a secret: Editing a site called Shareable.net does not come naturally to me, and I'm often uncomfortable when I have to describe our mission to strangers.

"It's, um, a site about sharing," I say with a touch of embarrassment. Then trying to impress the listener with the scope of our vision: "It's about how to design our society so that things are more shareable."

More often than not, my listener's eyebrows skeptically rise, perhaps simply because they detect my personal ambivalence.

Sharing sounds simple, doesn't it? And therefore boring and soft. But as I've discovered as both a parent and an editor, it's not simple or boring, not by a long shot.

The fact that we struggle so long and so hard with our children to teach them to share their freaking trucks and dolls tells us that sharing can be like going to the dentist–and yet it's essential (not unlike dentistry's relationship to our bicuspids) to a healthy life and society.

Adults have trouble sharing, too: our fiercest political conflicts are quite often around how much we are willing to share our stuff. (See: Health care debate.)

But look at life in most of our homes. Breastfeeding infants aren't incurring a debt. We don't expect our kids to pay us back for all the stuff we buy them. 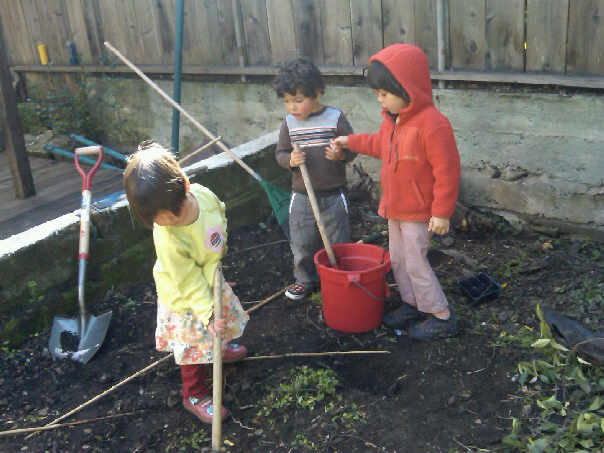 The intrinsically altruistic nature of family life provides us with a model for a more shareable society.

Unfortunately, however, generosity doesn't often extend beyond our genetic kin: We drive private vehicles instead of sharing transportation, we hoard stuff and generate junk instead of reusing or making what we don't use available to others, many of us don't volunteer or donate as often as we could, fathers don't share parenting with moms, and so on.

In fact, in my experience parenthood makes people somewhat more resistant to sharing, possibly as compensation for the fact that we give so much to our kids.

I know that's been true for me, and it may be especially true for fathers: A 2009 study by Steven Greene and Laurel Elder found that male support for social welfare programs (such as universal health care) plummeted after parenthood; meanwhile, mothers grew increasingly generous in their social attitudes.

"It may be that the act of nurturing children fosters empathy and caring, thereby generating more liberal attitudes concerning the role of government in helping others," write the authors. That's not a "sexist" or essentialist argument: In fact, it suggests that our beliefs are shaped by our day-to-day tasks instead of our biology. (Moms still do at least twice as much childcare as dads, I'm afraid.)

But in many respects, I think the way our society is designed is more decisive than our individual attitudes. Fathers often don't share parenting because they don't have any paternity leave or access to flextime, or even sick time. Transportation is not designed to be shareable; on a hundred levels, people are driven into private vehicles. We as Americans are pretty much responsible for our own health care, and fuck anybody who can't pay for a doctor.

OK, enough with the socialist propaganda. You get it, I'm sure, and you either agree or you don't agree that we as a society should become better at sharing.

But (paradoxically?) we probably still agree that it's a very good thing to teach our kids to share. You may see this as simple courtesy; I see it as simple courtesy plus training for building a more shareable society. First the playground, tomorrow the world.

The raw material is there, if we care to look.

Bay Area mom and Shareable ally Justine Fenwick has spent years watching her two kids battle for ground, leading her to wonder if sharing is innate or something that must be forced down our throats. But, she says, "Yesterday at the school playground I saw a three year old offer up a favored stuffed penguin to a crying child. How could we have survived these thousands of years without cooperation and sharing? Perhaps the question is all wrong and a more fruitful investigation is 'under what conditions does sharing occur?'" 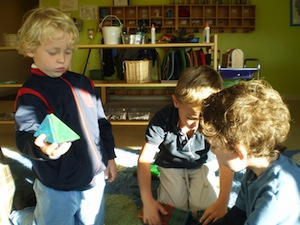 My own son Liko has done that sort of thing from babyhood, and babies have been observed exhibiting empathic behavior–the foundation of sharing–42 minutes after birth. We are wired to share, but the skill needs to be developed over time, just like any social skill.

Here's Liko and some of his five-year-old buddies building a rocket together, as reported to me by his wonderful teacher:

Liko: "I am building a ground control base that has people in it that talk to the rockets and tell them where to go. Can you help with the rocket?"

Storm: "I don't know how to build a rocket."

Liko: "That's okay. You can put stuff inside, like the cars."

Storm: "The clock is ticking. Soon the rocket will take off."

Liko: "Yeah, it is a car gas station rocket!"

Noah: "Niko you help Heath and I will work on the spaceship."

Noah: "Okay, why don't you build the big squares?"

Noah: “You can help make the decisions with us. You can put the different pieces together in different ways.”

Niko: “Just make sure they fit together with us okay?”

Those little dudes are on their way, man. They're Jedi Padawan Learners in sharing, and they'll discover the benefits of sharing, too: a cool car gas station rocket!

Of course, the skill of sharing can be underdeveloped, if the child is raised in an environment that discourages sharing. This makes evolutionary sense; social skills should be developed through socialization.

So I think Fenwick's question is the right one: How can we create the conditions in which sharing can occur? How can we design our families and society so that sharing just sort of happens, because it's easy and yields results?

Let's start with fathers, since I am one: If the Green and Elder study is true, then fathers who behave more altruistically at home, who engage in caregiving activities–who, in fact, share parenting with the mothers–are providing critical role models for their kids (and perhaps helping to create a more sharing society).

Why stop there? Another step: Self-consciously expand your family's sharing circle. A study published last year in the journal Cognition by Elizabeth Spelke at Harvard found that three year olds deliberately share–but they also discriminate about who is part of the sharing circle.

In the study, two kids were given dolls that were described as siblings or friends or as strangers–and then they were asked to enact a sharing situation. Not surprisingly, the sibling and friend dolls did a lot of sharing, but children isolated the stranger dolls.

The takeaways: 1) kids need to see other kids as members of the ingroup in order to engage in sharing behavior and 2) sharing is contagious–witnessing sharing acts makes kids more likely to share themselves. That's why I think it’s us adults who should first take our own inventory (as they say in AA) before we start yammering about our selfish children. If we want our kids to be sharing people, we have to be sharing people.

I'll add that I believe that adults need to articulate why we share to kids, not just provide an example. I recently started giving Liko an allowance with the condition that he put aside one third for savings and one third for sharing. A few weeks ago I realized that he had no idea why he was putting aside the money for sharing; I had explained to him that it was for giving to people in need, but, thank God, I don't think Liko yet understands the concept of true need.

Since then I've been going out of my way to note all the manifestations of sharing we see in our lives–for example, how the Jewish Community Center that serves as the hub as his life is supported by donations from people like him. I've also made it a point to talk with him about where I donate money, and why.

We still have a ways to go–the saving part of his allowance will go to a toy rocket he's been eyeing, and that's what I hear the most about. But we're getting there, I think, and in the process I'm discovering a lot about sharing, too.

This was originally published on my Mothering magazine blog.